A Perfect Summer for Golf

David Armelino sums up his favorite golf courses of the summer and what makes them unique.

What a summer it has been out on the golf course. I have been fortunate enough to get out and play nearly every week, or close to it, with my father and others joining in along the way.

I find that it is an amazing atmosphere to spend quality time with family members and close friends, while sharing in something that we all can enjoy.

It is something my father and I can talk about all day long after we play together, chatting about various holes and memorable shots we’ve had.

Whether it is walking nine holes, or riding 18, I always look forward to my time out on the golf course.

I am not someone who enjoys playing the same course time after time either. I am fond of playing as many courses as I can during the summer months. In my opinion, it adds to challenge of an already taxing game.

This summer in particular, I had taken up even more of an interest in the game than years past, which led to more outings at different courses.

New York is certainly no slouch in its number of quality golf courses. While I wasn’t able to play every course I would have liked to, there are still courses that I prefer more than others.

My favorite by far, however, goes to Radisson Greens in Baldwinsville. The course itself feels as close to a professional level golf course as Central New York has to offer, while the ambience is simply perfect.

The fairways are groomed especially well, and the day that my father, my cousin and I were in the midst of playing, the grounds crew was busy replacing the sand on some holes. This meant that a handful of holes had new sand while others contained the old. The new sand is plush and basically the best sand I’ve ever hit out of, which made being caught in one of the traps a little more bearable.

A before and after of a sand pit at Radisson.
Photos from Radisson’s Facebook page.

I liked the course so much that I went back on a separate occasion and bought myself a Raddison golf polo from the course’s pro shop.

Such lush conditions don’t come cheap, however, as it will set you back $35 to ride in a cart for 18 holes on weekdays, while on weekends the price is bumped up to $45. And you will want to play all 18, trust me.

Another course that caught my attention is the par three at West Hill in Camillus. This course is easily walkable for all 18 holes because of the short nature of the them.

A par three is not for everyone, however. But, if you’re looking to improve your iron shooting ability from the tee box, this is the place to do it.

There are leagues though, and if you’re unfortunate enough to get stuck behind them, it may get a bit frustrating because play can be slowed down considerably due to the size of the groups (as with anywhere, really). 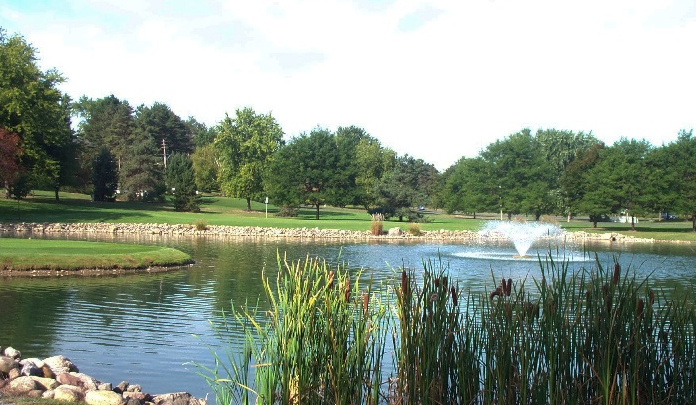 A view of the 14th green at West Hill.
Photo from www.westhillgolfcourse.com

There is a memorable water hole that is viewable from the West Genesee Turnpike, which overlooks the golf course as you drive by. A fountain inside the pond makes for a nice scenic view as you (hopefully) launch the ball right over it and onto the green. Despite being only a par three, there are also a few drivable holes, depending on how far you’re able to drive that is.

As I said before, there is no trouble walking all 18 holes on this course, which costs a mere $16 walking every day of the week.

When my father and I are having trouble deciding where to play, our go-to spot is typically Arrowhead Golf Course in East Syracuse.

This is a fun course because of how large it is. There are 27 holes that make up Arrowhead, with the extra nine being added in order to keep golfers coming back by having different holes to play on every time.

The course is well kept for the most part with some fairways being better than others. The only real thing there is to complain about Arrowhead is how behind the times they are in some cases.

For example, they lack their own website, which is becoming the norm for golf courses to have now a days. Also, they only accept cash. There is, however, an ATM inside the concession room. This may or may not mean much depending on the person.

Despite being a tad primitive in those two instances, Arrowhead offers a unique substitute if the other 18 holes have gotten stale.

Playing at Arrowhead will cost just $11 for a quick nine holes walking and $22 for 18 to walk, which isn’t too strenuous.

Liverpool Country Club in Liverpool is one that caught me by surprise. I live right near the area and had driven passed it numerous times, paying it no mind until I actually played there a couple of times this summer.

This is a quality golf course that does not have the absolute best conditions in the world, although, it certainly doesn’t have the worst. 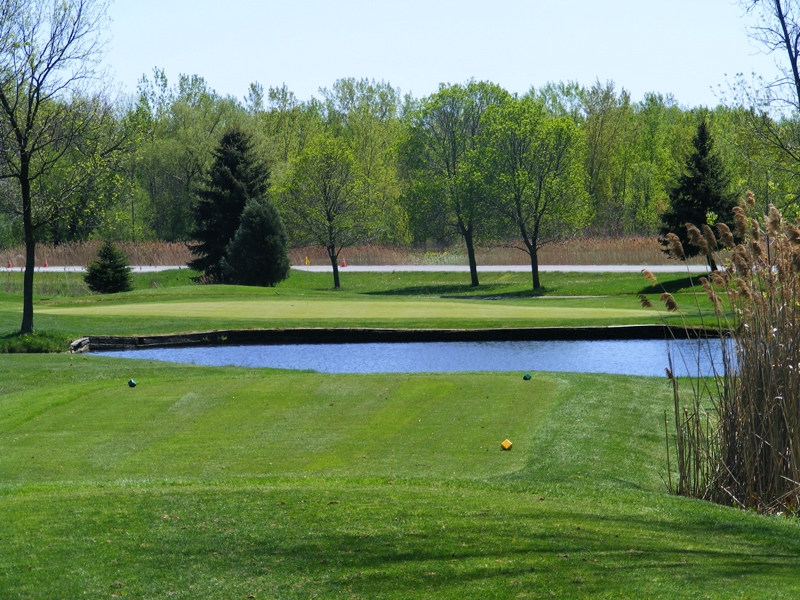 The second hole at Liverpool is a par three with a small pond in front.
Photo from www.lgpcc.com

Featuring a number of water holes, including a stream that almost seems to cover the entire course, it is enjoyable and challenging to play on every front.

The pricing is a bit unorthodox, with nine and 18 holes costing the same amount walking at $20 on weekdays and $22 on the weekends, which is a bit steep to say the least.

Liverpool also has a kid-friendly alternative to the main course called the tiger links. The six holes that make up the miniature par three course are all under 100 yards and will only cost adults $7 and kids $6. The idea is to play the course three times to add up to 18 holes played.

The country club was supposedly in danger of even opening for the 2014 season in favor of being sold to a land developer to be converted into new homes. This obviously didn’t end up happening, yet a lot of things remain up in the air for Liverpool’s future. If one thing is for certain though, the rest of the 2014 season isn’t one of them.

My summer golfing excursion isn’t finished yet either. My father and I have plans to play the public course at Turning Stone before I head back to Oswego for school on the 24th of August. Wish me luck!