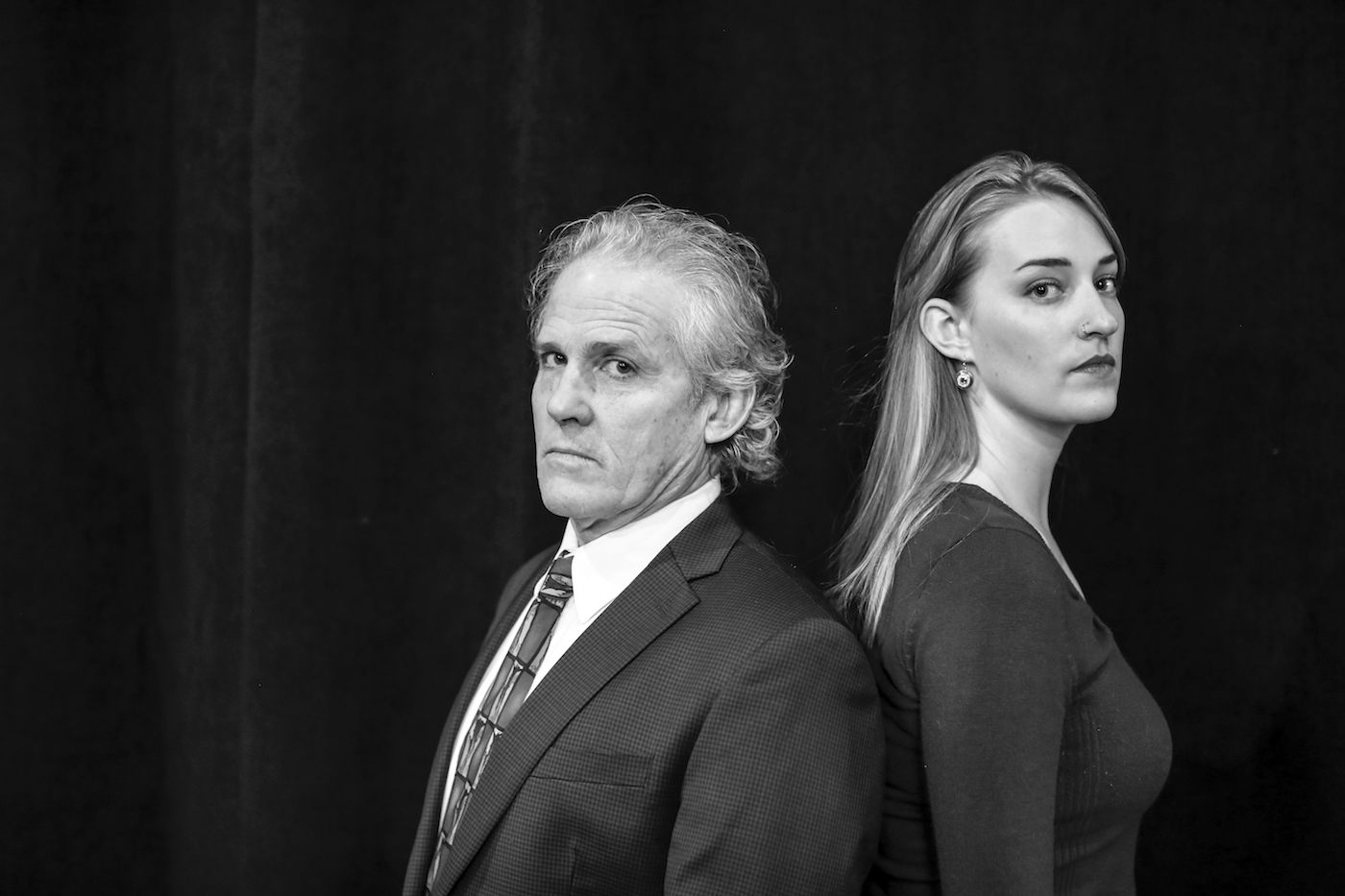 It’s incredible to think that David Mamet’s three-act Oleanna, when tracing pop culture lineage, came to fruition through the inspiration of a mid-19th Century Norwegian folk song. The social elements of a perfect society were tantalizing enough for Pete Seeger to translate it and essentially apply it to 1960s American society. After all, appropriately, the social issues resonating date themselves and prove the slow progress of society and human evolution for that matter.

Auburn Public Theater’s production of the two-character play definitely showcases the matters and societal turmoil in the spotlight for all these year. Plainly, the relationship between Dave Tobin’s John and Meg Clary’s Carol is professor and student. The relationship most obvious – man and woman. Here we have a middle-aged man and a collegiate-aged young woman at a battle of wits. The dark clouds looming over their heads is not a simple effect of lighting, but the complication of man-versus-self and ego.

The play is to be emotional. It’s supposed to entice feelings of disgust as much as it’s supposed to confuse the audience. Whose side are you on? — The answer to the question is not so simple.

The performances by Tobin and Clary are seemingly lackadaisical, but perhaps this is appropriate tact. Unfortunately, it’s difficult to want to choose a side when both characters appear almost apathetic to their cause; the fire and desire that should spew from the personalities cannot be seen or felt. It all creeps up from behind. However, the saving grace, the physical action — as it’s sprinkled in — is dynamic. 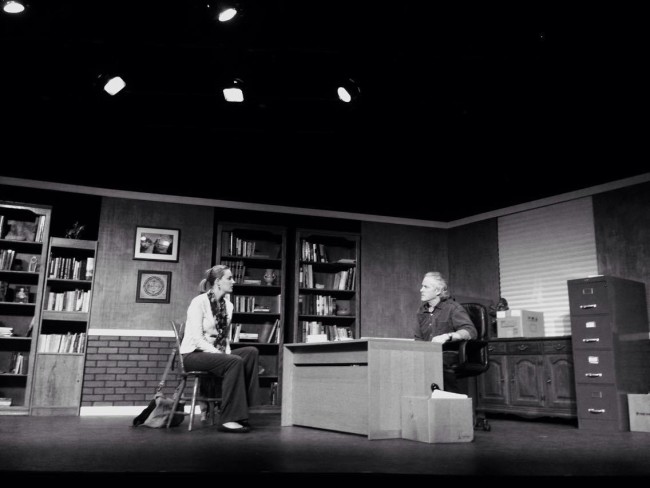 Tobin does state: “Some say it’s a form of aggression.” She replies, “What is?”

The heaviness and cutting dialogue is what’s important, and the insightful clues are strategically placed. The short, choppy verbal stabs throughout the battle are beautifully illustrated, considering the monosyllabic and often piercing rhetoric of “Do you see?”; and the every-other “I know/I don’t know” proves their blatant choosing not to listen.

Both are wrapped up in wanting to prove their worth, and they leave their guards down. The hubris, which is so explicitly different with the characters, allows each to get the upper hand in a see-saw character dynamic. Tobin fails to even listen to her, or believe her, when she not only fails to reveal little about her upbringing.  He ignores the foreshadowing when Clary says, “I can’t tell you … I’m bad,” in the first act.

Tobin uses his title of professor to reassure his power. His talk of tenure, relationship with his wife, the family dynamic and the simple fact of buying a house illustrates his privilege. As the acts unfold, he becomes weaker and cannot bullshit his way out of the situation. Whether he is fit to be in such a position is question, because through Clary’s classroom accounts and in-person life lessons, Tobin’s education toward his students is general, vague and nonsensical.  It’s not until the very end where you see his physical acting explode.

The cunning Clary’s personality shifts as she manipulates and exaggerates her teacher’s words and actions in a ploy to achieve some personal goal — she purposely misconstrues his words and actions to hold an attempted rape charge over his head when he did not blatantly and physically do so. His words are open to interpretation, and Clary seizes the moment to her benefit. Her attitude gains confidence, her attire becomes more professional — Tobin is sloppier — and her arrogance skyrockets. Her physicality screams a timid and anxious persona, which is clear at Oleanna’s opening, quiets by the end.

Both agree on a few things: seemingly awful childhoods; working to become great and credible; responsibility to their school, role and themselves; and desire for power. “Do you know what you worked for?” demands Clary. “Power.” Fittingly enough, her character sits in the spot where Tobin once was.

“Whatever side you take, you’re wrong.” The line is smeared across Auburn Public Theater’s playbill. This may be the case, but it’s difficult to swallow. Choosing a side will have to be up to the patron or reader, but it’s difficult to pick a side when left with no desire to support either of characters. Perhaps Mamet is to blame for this. Perhaps the simplicity and direction of the characters in a cut-and-dry play of parallels is so immense they cannot be grasped.

However, the strength of the play can offer a reality check of self reflection. How do you keep yourself in check? Are you conscious about your words and actions?

Fresh Music Friday: Marlon Williams
Love Songs For A Good Cause
To Top