My shift began ridiculously early, at 8:06 a.m., with words no receptionist-in-training wants to hear: “You’re late.”

I had an excuse, not that anyone gave a damn. While picking up two dozen doughnuts for the prima donnas at the Syracuse New Times, who were already treating me like their butler, there’d been a complication with the customer in front of me in line at Tops. So, yes, I was a few minutes late for my stint as receptionist-for-a-day, although let the record show that I did not last the full day. By lunch, I was too exhausted and overwhelmed to keep going, which is the point of this column. Being a receptionist is hard. Today, National Receptionists Day, we recognize that fact in hope that these multi-tasking professionals will eventually get the respect they deserve.

Of course, it will never happen.

“One whole wheat bagel with half a scoop of low fat cream cheese and a dollop of strawberry preserves,” came a gallingly imperious email from Sanity Fair columnist Ed Griffin-Nolan the day before I reported for duty.

“I like my donut to be chocolate glazed and I take my coffee black with 2 Equal packets,” chimed in Michelle Bowers, vice president of ad sales.

My inbox exploded with similarly demeaning demands. By the time I arrived behind the desk, I was sweaty, stressed and not feeling particularly social — hardly the ideal tool kit for the post.  After all, receptionists are in the first impressions biz. According to the National Receptionists Association, they function as information desk managers and concierges, telephone operators, maitre d’s and more, “Their skills are critically important in creating and maintaining the image of the company …”

It fell to Christine Scheuerman, the New Times’ smooth-as-silk office/circulation manager, to mentor me through the morning. Her policy:

“I always answer the phone as if it’s the boss.”

Christine added that she strives to make a visual connection with each visitor, and to use a professional tone even if the person is — and I’ll take some poetic license here — crazier than a chimp in a doorbell factory.

All this public politeness happens against a backdrop of innumerable behind-the-scenes tasks that in many instances are highlighted with color-coded reminder notes. Christine showed me how she pulls together an ad manifest that she submits to “Creative” — whatever that is — on Fridays. Or was it Mondays? She even handles payroll for the truck drivers. In the tsunami of information she shared, I fixated on the fact that each week an ad must be processed for a local toy store called Diamond Dolls. I made a note to go there and pick up a few dolls for the kids. Special Daddy Surprise!

I did answer the phone a few times. In each case, I efficiently transferred the callers to somewhere in the 315 area code. As if that wasn’t enough, Christine had me do something called “math” to calculate how many copies of the paper each delivery driver would need this week. Bottom line: If you can’t find our award-winning newspaper at your usual location today, call Ed Griffin-Nolan or Michelle Bowers. They will gladly bring you a copy. 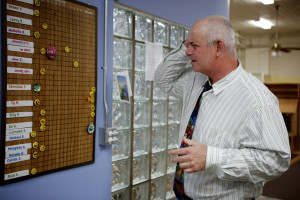 Finally, it was almost lunchtime, which meant time to snap at the publisher. In hindsight, maybe I was a little harsh, but seriously, is it that  hard to remember to move your smiley face avatar on the magnetic board from “Out” to “In” when you come in the office. Or am I supposed to use X-ray vision to see if you’re at your desk?

Mr. Brod apologized, and right then I understood something about being a receptionist. For all the crap you get, there’s power in being the only employee who knows how the place works — and doesn’t. That power can be used to reward allies and punish enemies, to promote some agendas and subvert others. Christine, of course, would never misuse her position that way, but I sure would, and as I watched her sort mail it occurred to me how easily she could “misplace” my invitation to the Cuomo-Mahoney wedding or neglect to mention that Scarlett Johansson was holding for me on Line 1.

So, yes, I’m getting Christine flowers for National Receptionists Day.

Doesn’t your receptionist deserve the same? 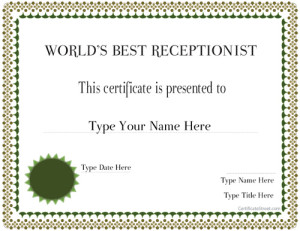 Concern About Laborers Not Well Cultivated in U.S.
Sharing the Stage with Springsteen
To Top