May Day passed, as it usually does in this country, unobserved.

While workers around the world set aside their labors to demonstrate their solidarity and air their grievances, here in the United States we just went to work. Or danced around a maypole. In a propaganda effort worthy of the northernmost Korea, successive generations of U.S. political leaders have managed to help almost all of us to forget that the first of May has its origins not in Moscow but in Chicago, where a march to support the right to an eight-hour work day was attacked in 1886.

It’s more than obvious that these are tough times for unions. Recently, the United Auto Workers lost a union election at a Volkswagen plant in Chattanooga, Tenn., a campaign in which the company all but endorsed the union! If you look for coverage of unions in your local media, you will find most of it is in the sports pages. It’s enough to make you think that only major league ballplayers (and possibly college football players) are eligible to join unions.

Meanwhile, community groups around the country, including here in Syracuse, have stepped up and found novel ways to support workers who have little or no means to protect themselves. Consider the case of the tomato pickers in the central Florida town of Immokalee. I spent the stickiest summer of my life years back in Immokalee, a town where no one goes to retire and no one goes for vacation. It’s stuck in between sugarcane country and alligator country, and it’s also the place where immigrant laborers go to pick tomatoes and other vegetables. Work one day under that scorching sun, and you will never again complain about the price of tomatoes. 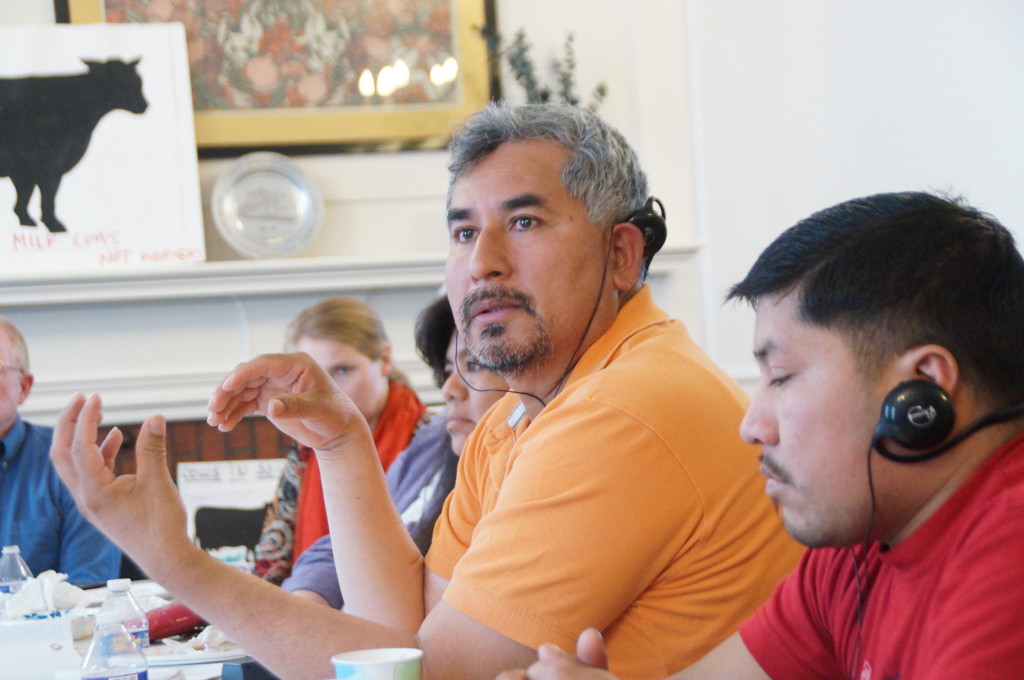 Jose Cañas, a farm worker originally from El Salvador, speaks to a group of supporters at Plymouth Congregational Church on May 2. (Photo | Wendy Colucci)

In 20 years of organizing, the Coalition of Immokalee Workers (CIW) has won wage gains and improvements in working conditions by asking consumers to become educated about how the people who feed us are treated and paid. You might remember nearly 10 years ago, when Taco Bell agreed to buy tomatoes only from farmers who treated their workers fairly; that was the CIW’s doing. Since then, they have gotten Walmart, McDonalds, Burger King, Subway, Chipotle and others to sign on to their “Fair Food Agreement.” This protects workers on the job, brings their wages back to where they were in the Carter administration, and adds just a penny a pound to the cost of vegetables. Not a bad deal.

The Central New York Workers Center is a sister organization to the Immokalee group. It has been at the forefront of efforts to promote safety for immigrant workers in the local dairy industry. Rebecca Fuentes, one of the leaders at the center, says that according to the federal Bureau of Labor Statistics, 55 workers have died on state dairy farms since 2006. That’s a stain on the record of an industry that is exploding as the worldwide fascination with our Greek yogurt grows. 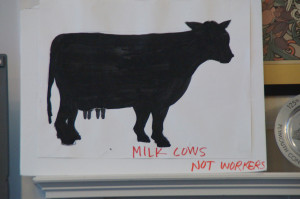 The Occupational Safety and Health Administration (OSHA) put dairy farmers on notice in August that it would begin unannounced safety inspections on farms this July. It should be noted that only rarely do these inspections result in fines.

Nonetheless, both Rep. Richard Hanna (R-Barneveld) and Rep. Dan Maffei (D-Syracuse) joined their upstate colleagues in signing a letter in December begging the government to postpone the inspections. (You can read the letter HERE)

Hanna and Maffei suggest that the farmers need a little more time to get educated about how to bring their operations up to snuff. How much time? They don’t say.

If you go online to THIS LINK, you will find a document from OSHA to aid dairy farmers in preparing for such inspections. It’s 25 pages long, and that includes a lot of footnotes. They’ve had a full year; are Hanna and Maffei suggesting that our dairy farmers are slow readers?

Hardly. Normally you might think that when politicians from two different parties make common cause, it is reason to celebrate.

In this case, it is not.

It is a reflection of simple math. Farmers can vote. Their immigrant workers cannot.

Interview: Gov. Lincoln Chafee (part 2)
A day as a Receptionist-in-training
To Top