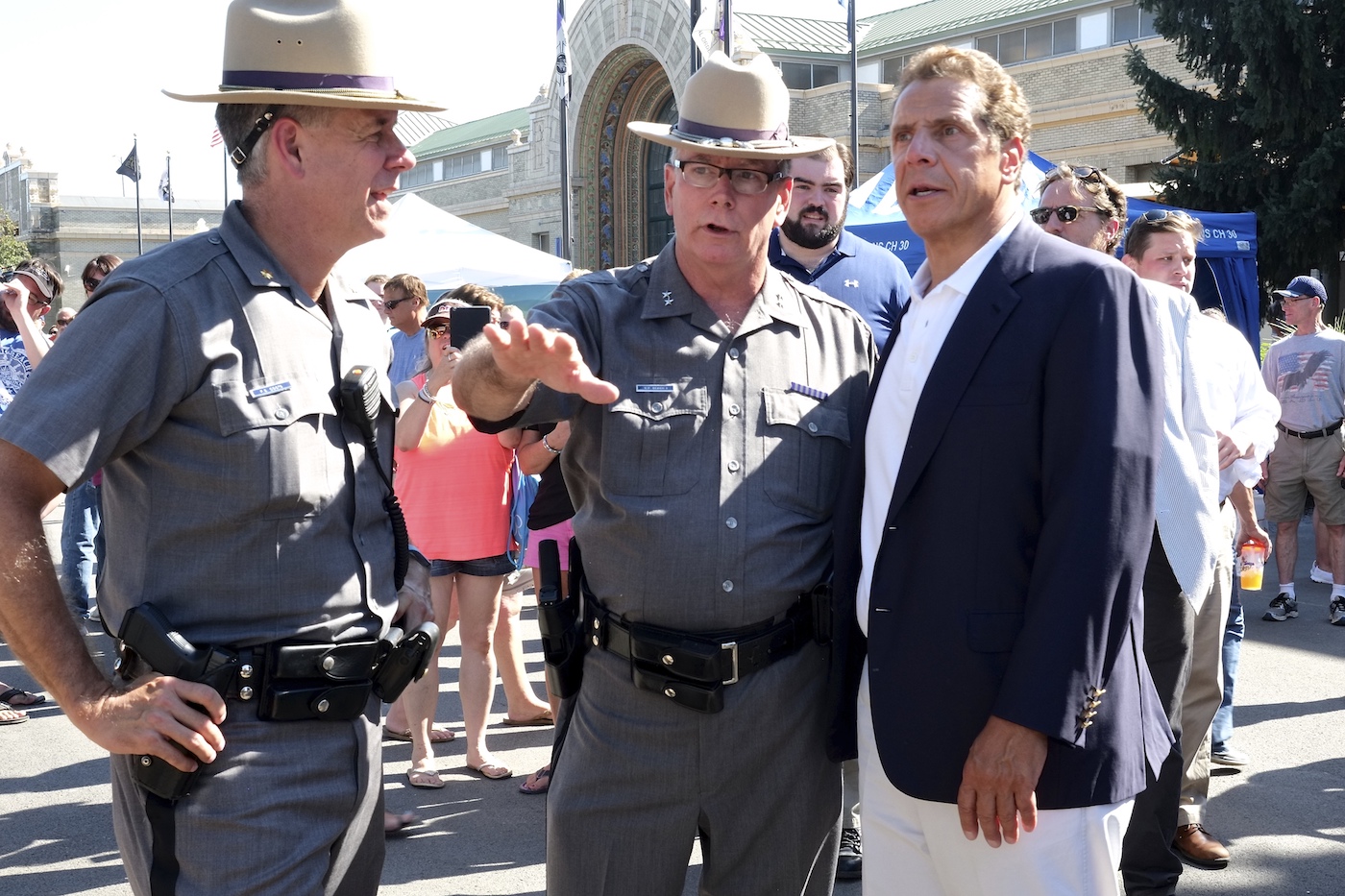 In 1984, New York Gov. Mario Cuomo gave a scathing rebuttal of Ronald Reagan at the Democratic National Convention, a speech that electrified the crowd and turned him into a political superstar.

There were many Democrats, including the governor himself, who thought he might someday make a bid for the presidency. He never did. He died in 2015.

Now with Donald Trump in the White House and the Democratic Party out of power at the federal level and in many states, there’s a lot of buzz about whether or not Cuomo’s son, current New York Gov. Andrew Cuomo, has 2020 vision.

The younger Cuomo has not said. Only that he plans to run for a third term as governor in 2018. But many have sensed national ambitions from him for a long time. And his actions, both before the 2016 election and since, offer clues.

With Barack Obama’s tenure now over and the 25-year Clinton dynasty ancient history, the Democratic Party is effectively leaderless — and Cuomo is climbing through the ranks. One month after Trump’s election, Cuomo was elected policy chairman for the Democratic Governors Association, ensuring he has a place on the national stage.

It comes at an interesting time for the party. Despite what pundits said throughout the campaign, the Democratic Party is divided, a division on full display in 2016: It has a centrist Clinton wing and a progressive Bernie Sanders wing. Clinton turned out not to be the candidate to unite the party. To many, Cuomo may look like the best of both worlds.

He can easily be painted as one of “the Old Guard.” During his first term as governor, he was more or less a fiscal conservative who cut taxes on the rich. He also had a good relationship with state Senate Republicans, so much so that the left-leaning Working Families Party almost didn’t endorse him during his 2014 re-election bid, when he also faced a surprisingly tough primary challenge from Zephyr Teachout, whose liberal stance helped her capture a third of the Democratic vote. Cuomo also endorsed Hillary Clinton over Sanders ahead of the New York primaries last year.

But Cuomo has also spent the last few years fulfilling a liberal agenda, mirroring key points Sanders spoke about that made him so popular. In 2011, Cuomo signed into law a measure to make New York the fifth state to legalize gay marriage, now the rule of the land. In 2013, he passed the SAFE Act (Secure Ammunition and Firearms Enforcement), which has become a model for tough gun restriction laws around the country. In 2014, he officially banned hydrofracking and thwarted efforts to build oil pipelines in the state.

In 2015, Cuomo unveiled a plan to make renewable energy generate half of the state’s power by 2030, which laid the groundwork for the largest solar panel producing plant in North America in Buffalo and a wind farm off Long Island. In 2016, he was able to get the state Legislature to approve his plan for a $15 minimum wage and enact a paid family leave program.

In 2017, now aware that 2020 will not be Hillary Clinton’s re-election year, Cuomo released budget proposals that were nothing short of a progressive’s dream. The highlight was a plan to provide free tuition to SUNY and CUNY schools for students with families making less than $125,000 a year, a plan he announced rather theatrically, with Bernie Sanders, of all people standing by his side to cheer on the proposal.

All of that provides a lot of bragging rights to both wings of the Democratic Party. But actually, right now Cuomo is already a strong leader in what may be the biggest Democratic equalizer. He is the anti-Trump.

The governor easily ranks among Sanders and Sen. Elizabeth Warren as one of Trump’s most vocal critics. He was among the Democratic governors who signed onto a letter opposing the repeal of the Affordable Care Act over the impact it would have on states. He added New York to an interstate agreement where states award their electoral votes for president to the candidate that receives a majority of the national popular vote in an effort to undermine the Electoral College system, the reason Trump won in the first place.

Cuomo also recently proposed a state constitutional amendment to codify abortion rights should Roe vs. Wade be overturned during the Trump administration or afterward. And of course, he’s been on the front lines of the war against Trump’s executive immigration order, directing officials to protect those detained at John F. Kennedy Airport, home base for the protests going on across the country.

It’s safe to say Cuomo is the anti-Trump, but that may not be enough to win the White House in 2020. After all, Hillary Clinton was the ant-Trump and she lost. To win, Cuomo must be the anti-Trump, plus one.

He’s already taken the first step by acknowledging that Clinton didn’t lose because of Russia or FBI Director James Comey. “I don’t believe that Trump won,” he said at a birthday fundraiser with his donors. “I believe we lost that election. And I think what it said to the Democrats is there is a middle class that we have not been attentive to and it’s a middle class that’s been suffering for a long time.”

Home run. He knows that Democrats need to reconnect with rural, white, working-class voters to have the best chance of retaking the White Office in 2020.

But his 2014 election results show Cuomo doesn’t appear to be doing that too well in upstate New York, a solid base of that voting bloc. Cuomo won only eight counties north of the New York City suburbs. In fact, Cuomo’s 2014 upstate win map is remarkably similar to Clinton’s performance in the presidential election.

He’s clearly aware of that, which is why he crisscrossed the state last month, bringing his State of the State address to different communities in small segments rather than in Albany on one day, hoping to reach out to those small-town people who helped elect Trump.

And while it probably helped some, he failed to take his message past upstate’s major cities to the places he actually needs to gain support in, like Oswego County, where President Obama won by seven points in 2012 but Trump won by 23 points in 2016: It was the largest swing out of any other county in the state. Cuomo’s upstate results in his 2018 re-election bid would be a real test for his performance with Trump voters in the Rust Belt, who Democrats have been able to count on for 30 years but voted against them in November.

Now, that wouldn’t be Cuomo’s only hurdle. He would definitely be attacked for the scale of corruption in the state government that has gone on under his watch, some of it tied to his closest aides. He would also be criticized for START-UP NY, his jobs initiative that has been tainted by illegal activity and has produced lackluster results in a state that is constantly rated as hostile to business. He also currently has a pretty frosty relationship with the Legislature, including members of his own party, hurting his image as a unifier.

Cuomo could also be upstaged by another New Yorker: U.S. Sen. Kirsten Gillibrand, who has gained a lot of respect in Washington and is also being watched closely as presidential material. Like Cuomo, she is up for re-election in 2018 and maintains that’s the only race she’s concentrating on.

To write a Cuomo 2020 success story, he already has the first few pages written. He has name recognition, both because of his family and by his own means. He has money, easy access to donors and a leftist success record to ride on.

Now there are a lot more pages left to write. But if the White House is on the final page, a page his father never made it to, he is more or less doing what he needs to be doing to get him there.

Keeping The Faith Amid Turmoil
Vision Quest
To Top