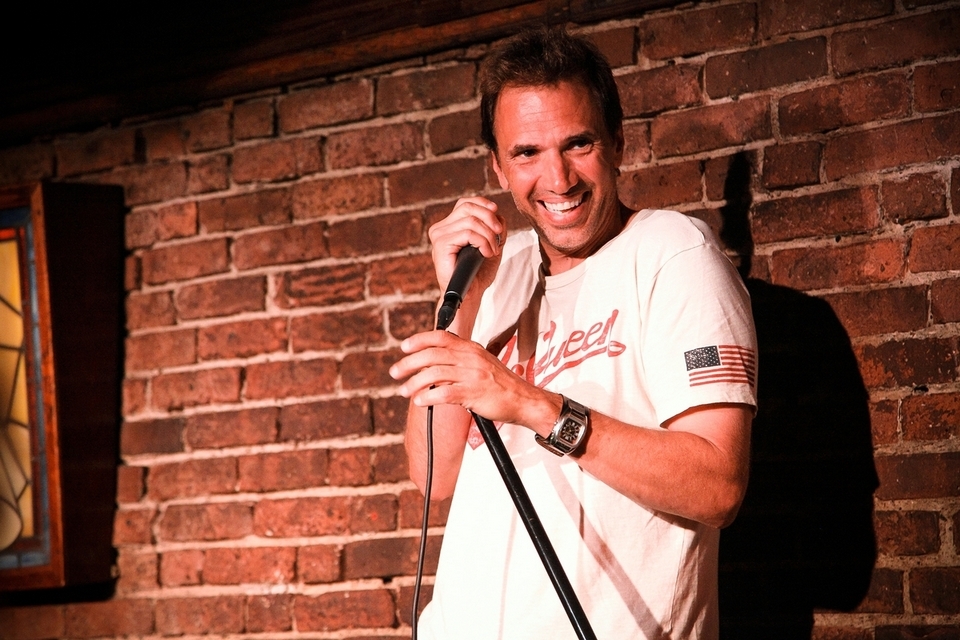 The Auburn Public Theater hosted its first comedy show in 2006, featuring Rhode Island native Paul Mecurio. After returning to the Central New York venue a couple more times since, this appearance marks a decade after the debut set on Saturday, April 23, at 7:30 p.m. Tickets for the show are only $15.

Mecurio, who began his path to adulthood with graduating with honors from Georgetown Law School, decided to stop working in investment banking and acquisitions to pursue a career in comedy. He’s made multiple appearances on televised stand-up specials and late night shows. The comedian has also earned an Emmy for writing and a Peabody Award in Excellence for his efforts while working on The Daily Show.

Simply: How are things going?

Things are good! I was just in Minnesota, and now I’m back in New York, working with Stephen Colbert before going up to Auburn. I’m psyched to be going back.

Are you currently on a tour?

You don’t go out as a comic for several months at a time like a rock band. You go out for partial weeks at a time. In this case it’s just one night in Auburn.

Do you remember you last time in Auburn?

I do remember getting drunk and waking up with my head completely shaved. I don’t know what happened.

Yeah, I had a great time. It’s like visiting extended family or friends … and getting to golf or go out to dinner. People are really cool up there. They’ve really embraced me coming back from when I first performed. I’ve done it several times. It’s work, but it doesn’t feel like work. They get and are really into comedy.

Like anywhere, when people really want to see comedy, they’ll come out to see comedy. It’s not because they don’t have anything better to do.

How did you evolve from law and investments to comedy?

I wanted to figure out a way to really piss off my mother and father. Nah, I was on Wall Street and had done every drug that they had. I’m like, I’m going to move on to comedy and see what drugs they had over there.

I began writing jokes as a hobby when I was working and doing deals on Wall Street. I’m not sure why, but I had these jokes.

One thing led to another. I attended a private function my firm was invited to, and Jay Leno was the entertainment. After he was done performing, I approached him and told him about my jokes. I wasn’t going to use the jokes, being a lawyer. The next day he called me, told me he read the jokes and said he’d hire me for The Tonight Show. It meant a lot.

The following week he performed the jokes. It was incredibly powerful. I became obsessed with writing jokes. I was taking two notebooks to the deal meeting — one for work, the other for jokes. I was primarily writing jokes and trying to recreate the meetings from memory, which I couldn’t do.

I started to do stand-up comedy, because Jay said to go try the jokes out. I began to live this secret double life: I was a lawyer by day and a comic by night. I’d sneak out of work on a dinner break and go to dive bars, working open mic nights, around New York City.

To give you an idea of the places I worked, one of the places was called Downtown Afghanistan II. I was thinking they were either franchising these things or, I don’t know, somebody probably blew up the first one. They’d sell drugs out of there. A sign on the men’s room door that said: ‘Employees use only to go to the bathroom, not to cut coke. Thank you, Management.’ I’m about to go on stage one night and there’s a fight at the pool table. A guy is cut across the neck with a box cutter over a drug deal gone bad.

I think the show’s over, and as I’m about to walk out the door I hear, “Are you guys ready for some comedy?”

I get up on stage and say, “Nice to be here. I’ve always wanted to follow a slashing.” The guy with the side of his neck cut laughed and took all of his bloody napkins and threw them at me, and they stick to my shirt. Now there’s a big blood stain on my shirt, and I go back to back to work. They point out and ask why there’s blood on my shirt. Before I can explain, thinking my secret will be outed, a guy says, “All you need is club soda and lemon juice.”

That was just one example of how my worlds collided. Then I decided to just jump into the water and do [comedy] full time, otherwise I’d have regrets.

Did you take stand-up classes, or was this natural?

Yeah, I did for structuring jokes and a little performance technique. You really just have to do it (perform comedy).

You use the stage and gestures to enhance well to enhance your stand-up. How has your comedy evolved?

When you first start, you have to wear an adult diaper. You’re just crappin’ your pants. You hold on to the mic for dear life. There are the jokes that are easy, because people get them and they’re safe. Over time you become loose, and it becomes second nature. Then you get so loose to the point where you’re talking like we’re talking now, except you happen to be funny.

It’s getting comfortable with yourself, talking about things that you really want to talk about. I talk about my life, terrorism, why I have to self-bag — why I want to kill someone every time I have to do it. The best comedy comes from your personal life, your passions.

Do you improvise at all, or do you have a set list?

I improvise as I go along, but I have material in my head that I want to do. Depending on the place and the set, I’ll change up the material depending on where the improv is going. It’s a process. I don’t like to do the same set of material the same way.

Plus, I do a lot with barnyard animals so it will always involve a whole other set of — that’s a joke.

Are there bits people ask for or call out and want you to perform?

Once in a while, but not that often. If I pay someone to do it, which I will — I’m shameless — and if I’m paying you, you’re going to have to do it.

Every once in a while, and if they’re that much of a fan, I’ll do it. It’s funny: (As a comedian) you always want to try to do new stuff, to be fresh every time they see you again, a repeat audience, but then they’ll come up to and say, “I wish you did that think about whatever.” It’s a balancing act.

It’s like you’re going to see The Stones. They perform new songs, but you want to hear “Satisfaction.”

How did you get into pod casting? What direction did you want to take with 2 Chairs and a Microphone?

I felt there were only four million podcasts and the world needed another one. I like interviews and talking to people. No one was doing the interviews that I enjoyed listening to, so I decided to do it. It’s inexpensive to do. I’m getting opportunities to talk to great people like Paul McCartney, Stephen Colbert, Bob Costas, Judd Apatow and more. It’s an opportunity to learn more about somebody in the public eye … or about somebody they don’t know, but I think should know. People are doing great things and are staying kind of anonymous. It’s really taken off, and it’s cool.

Of the people you’ve interviewed, who —

Which is the best one I’ve ever done? Is that what you’re saying, because I’m saying it right now, man.

[Laughs.] I can’ tell you most, but Sir Paul McCartney was fascinating. To learn about the process of writing music, why (The Beatles) kept changing their sound. They got bored and wanted to try something new, and they kept reaching for the next thing. It was interesting to hear what motivated them.

Neal deGrasse Tyson, the astrophysicist, talked about his thinking about becoming a male stripper in grad school to make a some extra money, because he was a classically trained dancer. He went to go watch what the strippers were doing, and a guy entered in a thong. After pouring lighter fluid on his thong and setting it on fire, he came out to “Great Balls of Fire.” That’s when he said, nah, this isn’t for me.

Everybody has a story. Bob Costas first listened to St. Louis Cardinal games through a transistor radio. Stone Cold Steve Austin tried out three different personas before setting on the one he’s noted for, picking it up from performing at shows throughout the country, listening to audience reaction reaction.

It’s just getting the stories out of the people. They want to talk, and they appreciate your taking the time to do research before the conversation.

Do you have any books, CDs or other projects you’re working on?

I just released a CD (It’s Not Me, It’s the World). I have a talk show that I shot two episodes for. It’s a one-on-one interview format. It’s a casual, hip show and not a traditional show hosted by a guy wearing suit and sitting a desk. It’ll be called The Paul Mecurio Show, and it’s coming out shortly.

There is also a sitcom I’m working on, which is based on my life story. It’s about a guy who is torn and trying to figure out his life. He’s stuck between this Wall Street guy and doing stuff he’s supposed to do, what he’s passionate about and doesn’t pay any money. It’s along the lines of how to make that life choice with all the doubts he’s going through.

What channels will they be on?

We don’t know yet. I’m really excited about both of the shows. I’m also continuing to make rounds on the news shows as a political commentator, too.

Do you feel the need to and value of keeping up with current events for your profession?

I think you have to. I’m not a political comedian, I do more observational comedy and comment on the world, but you have to be well-read, know what’s going on and be able to speak on certain topics. A lot of times people think comedians sit around, play video games and smoke weed — and we do, please don’t think I don’t — go out, tell a few jokes and party the rest of the night. It’s a lot of work to know what you’re doing, to have a strong act and pull it off. You have to be abreast of things.

Do you have any pre-show rituals or superstitions?

Oh, yeah, there are several. I sacrifice a goat before every show, so I need to have a giant green room covered in tarps. Then I usually get a piercing of some kind in my lower region.

Nah, I listen to music. I need music to get me pumped up. I do like to be alone for a little bit before I go on stage. It’s so I can weep uncontrollably out of fear.

A good cry is necessary sometimes.

You know what I mean. You’ve done that before.

What music are you listening to lately, before shows?

A mix of stuff: The Black Keys. Joe Cocker.

Do you have any final thoughts?

I have some great people coming up for podcast episodes. I have Bill Burr, Larry King and Norman Reedus to name a few.

Here’s a sample of Mecurio’s standup: