Columnist Cheryl Costa explores the magnitude of UFO sightings in New York for the past 15 years.

As most of my regular readers know, I’m always crunching the UFO sighting numbers and sharing them.  Now that 2015 has ended, I downloaded the NY database and spend this past Sunday scrubbing the data. So what does data scrubbing mean?

Since the UFO sighting reports are manually entered into the National UFO Reporting Center (NUFORC) by the average person, it’s safe to say that certain fields in the web form don’t always get filled in correctly, or at all. Many times there are typos in the date/time field. Other times, folks in their excitement report something amazing, but fail to enter the city where the sighting occurred or they improperly spell the city name. Since the public version of the NUFORC database doesn’t report county information, the task of manually inserting county information falls to the humble analyst.

So scrubbing takes the form of fixing the typos in the date and time field. It also requires correcting the spelling of the many cities called out in the over 4,000 records in the New York database. Scrubbing the New York sighting database in this case took nine hours. I know it sounds like a lot, but the very first time I scrubbed the database it took me over 75 hours. Needless to say, I’ve refined the process since last year.

In the following chart, I’ve plotted the yearly UFO sighting occurrences covering a 14-year span from 2001 through 2015. Please remember that this chart only represents NUFORC data. In previous articles, I have reported numbers that were about double. This is because I combined Mutual UFO Network MUFON numbers from the same sample period.

Please note: Since 2008, there has been an upward trend in the state’s sighting reports. I think that 2012 was a statistical fluke for New York. Of the top five states that I’ve analyzed, not everyone has seen a jump in sightings in 2012. That said, I have noted an upward trend for 2014 with both New York and four other top five states.

A couple of months ago, I wrote about the unique data I had gathered from analyzing New York’s 62 counties. I neglected to share any charts and for that I received mail requesting charts the next time I report county sighting levels. Below is a list of the top 20 counties in New York for UFO Sightings. This should give at least seven of them bragging rights. Sorry Pine Bush! Orange county came in at 11th place. 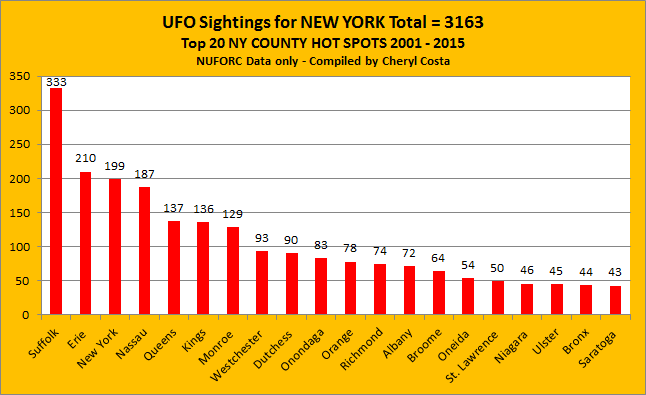 Stay tuned! Next week I will share with you for the first time anywhere the chart that breaks down the types of UFO shapes reported in the past 15 years.

Jan. 7, 2016: At 6:50 p.m., a resident of Amsterdam reported seeing a formation of three lights flying at low altitude being followed by a helicopter.

Jan. 7, 2016: At 5:25 p.m., a resident of Cortland saw a triangle-shaped craft, with circular rows of distinctive red lights on the underside and a few white lights towards the center.

Jan. 12, 2016: At midnight, a New York City family observed a bright object hovering in the sky, then in a flash, it flew vertically out of sight.

If you are interested in joining a monthly UFO discussion group in the Onondaga County area, drop Cheryl an email N[email protected] If you have a UFO sighting to report, you can use either one of the two national database services: nuforc.org or mufon.com. Both services respect confidentiality.

Fried Calamari
NY is Getting Hit Where it Hurts
To Top