Columnist Cheryl Costa explores the magnitude of UFO shapes seen in New York skies for the past 15 years.

I frequently have people tell me about their personal UFO sightings and every one of them does their best to describe the shape of the object in question. When words fail to describe the object, they often resort to drawing on a pizza box or a cocktail napkin. One lady I remember fondly was so passionate about showing me her UFO, she dug out an eyeliner tube from her purse and drew the UFO shape on the table top at a diner.

If you want to see a chart of the various types of UFO configurations, there are plenty of sighting charts on the Internet; simply Google: “UFO shapes.” In the spirit of the UFO shapes discussion, I’ve decided to share a summary of the 3,163 UFO shapes reported in the past 15 years from 2001 through 2015. 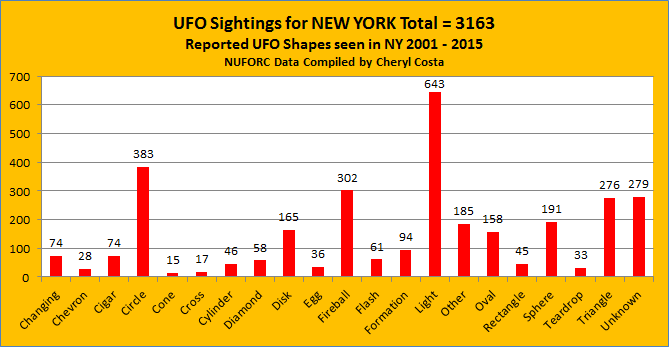 It’s not all that uncommon for people to see some bright light in the sky that behaves in a unusual way, so 643 reports of witnessing “light” doesn’t surprise me. The next most common sighting is a “circle.” Most usually it’s reported as a ring of lights, like a string of bright, glowing balls. The other way I’ve heard circle UFOs described is being glowing rings, sort of like a glowing “hula hoop.”

Next up are fireballs, which are frequently described as red-orange. I have seen one and it’s an amazing thing to see. First off, it has a flicker, which my author friend Thomas Conwell, crisply described as a pulsed digital flicker. These things aren’t Chinese lanterns, as some write me to suggest, because when they not hovering or darting around like a bumble bee they’re flying at the speed of an airliner. Fireballs are increasing in the reporting numbers and we see a lot of them in NY.

Following fireballs on the list are black triangles. Now before some of the arm chair skeptics try to casually write these craft off as something developed by our industrial military complex, please know there have been reports of these triangles in the late 19th century.

Flying spheres are the next, and happen to be some of the first UFOs I witnessed when I was around the age of 12. A huge silver ball hung in the western sky for roughly 20 minutes before whizzing off at tremendous speed. It took my breath away to see it. We only see about a dozen reports of them a year here in the Empire State.

The last UFO shape I will discuss is the disc. When the UFO fever hit this country in the 1940’s, 50s and 60s, the moniker given to the flying disc was “flying saucer.” The number of disc-shaped UFO reports average about a dozen per year. Some Ufologists suggest that the classic disc is being slowly phased out by the black triangle. I suppose one can’t argue with a popular new model!

Jan. 10, 2016: At 4 p.m., a resident of Cooperstown observed a slow-moving white rectangle with bright amber lights on bottom. The sky was clear and blue sky at the time of the sighting.

Jan. 11, 2016: At 10 p.m., a resident of Rifton reported seeing a rectangular object approximately 300 feet up moving in a straight path toward the east.

Jan. 17, 2016: At 10:30 p.m., a motorist in South Huntington witnessed a triangular-shaped craft with bright white lights approximately 500 yards in front of him.