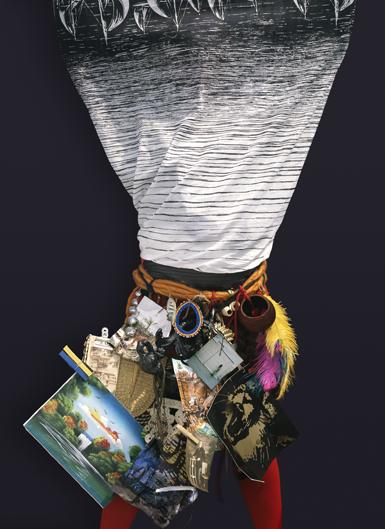 Each work presents an image of a group of objects held together by clothespins and other connectors and draped over a person’s torso. We don’t see the model’s face, but we do see an array of items. In “Index Three, Composition Three,” Simmons has assembled pottery, photos, earrings, an image of a idyllic scene including a waterfall, and an illustration of indigenous people doing backbreaking work.

That collage doesn’t serve as a prototype; there are no prototypes in the exhibition. In “Index One, Composition Three,” Simmons works with branches, small African sculptures, a woman in a comfortable setting, and a photo taken many decades ago, with the image symptomatic of stereotyped views of people from Africa and Asia. 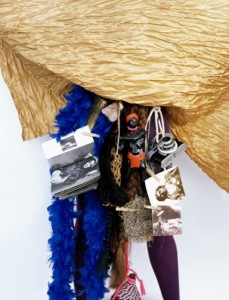 The artist combines a camera, straw, rope, an image of a native woman, and a photo of a white woman, possibly a model or an actress.

In a third piece, the artist combines a camera, straw, rope, an image of a native woman, and a photo of a white woman, possibly a model or an actress. Once again, there’s no theme per se. The work challenges viewers to draw their own conclusions.

A free-ranging approach also emerges in “Index Four, Composition Three.” It mixes bright textiles as well as photos of a cowboy on a horse, the sky, and a whooping crane. There are instances in which a photo is partially obscured so that we only see part of it.

Elsewhere, Simmons uses a range of other materials: toy figures, feathers, a jug, beads. a photo of a dance class, a palm card promoting a numbers operation, and much more. Clearly, the objects are diverse, encompassing not only sculptures and photos but also items from the natural world such as leaves and branches.

At the same time, they aren’t selected on a purely random basis. The pieces are visually interesting and form a solid base for the artist’s delving into cultural clues. They touch both on Simmons’ own experiences and on a general notion of how culture affects people.

In addition to the aforementioned artworks, the exhibit presents an image of the artist pointing to a desert scene, and a blackboard filled with 22 lines of text. The photo suggests that Simmons is a seeker, fitting in nicely with her background. She once spent two years walking with Buddhist monks and retracing routes associated with the Trans-Atlantic slave trade. The blackboard, meanwhile, displays various phrases and is subject to a viewer’s interpretation. 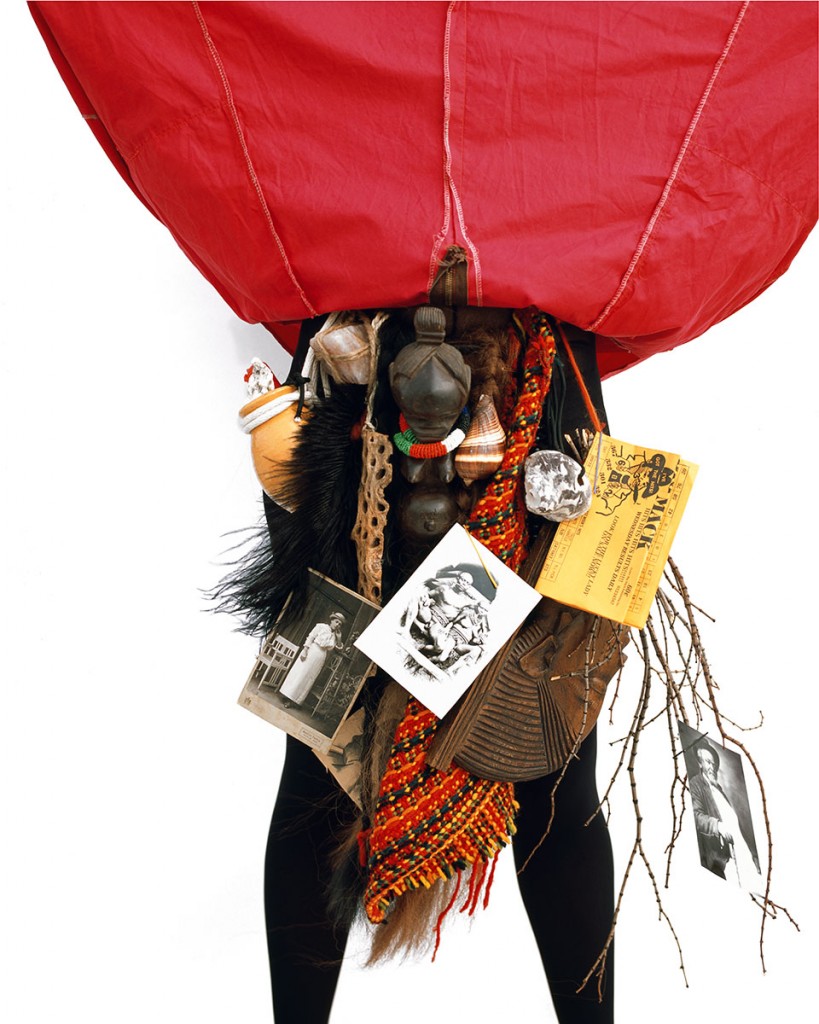 “Index One, Composition One” by Xaviera Simmons.

As an artist, Simmons has created photos, video, sculptures, installations and other media. Thus, it’s appropriate that the Urban Video Project is displaying her hour-long video, “Number Sixteen,” on the outside southern facade of the Everson Museum of Art, 401 Harrison St., from 5 to 11 p.m. on Thursday, Jan. 29, through Saturday, Jan. 31.

Through March 5, Light Work’s hallway gallery is displaying the 2015 Transmedia Photography exhibit, a student showcase from Syracuse University’s College of Visual and Performing Arts (including this work by Nancy Taylor). A reception will be held Wednesday, Jan. 28, 5 to 7 p.m.

On With The Shows
Curating the Corridor
To Top