In her first three weeks as executive director of the Everson Museum of Art, Elizabeth Dunbar has plunged into a whirlwind of activities: interacting with staff and board members, evaluating programs, discussing ways to make the museum a more comfortable space, and much more.

At the same time, she is focused on a prime directive for the Everson: to fully explore and showcase its permanent collection, which includes nearly 11,000 objects ranging from sculpture, ceramics, videos and paintings. As she talked about major exhibitions scheduled for 2015, Dunbar detailed avenues for linking the collection to each of them.

On Saturday, Feb. 7, Prendergast to Pollock: American Modernism from the Collection of Munson-Proctor-Williams Arts Institute begins a three-month run.

Thirty-five of the pieces come from the Utica museum’s permanent collection and were created mostly during the first half of the 20th century. The artworks include everything from figurative paintings and landscapes to pieces embodying Abstract Expressionism. There are paintings by Jackson Pollock, Reginald Marsh and Maurice Prendergast, among others. 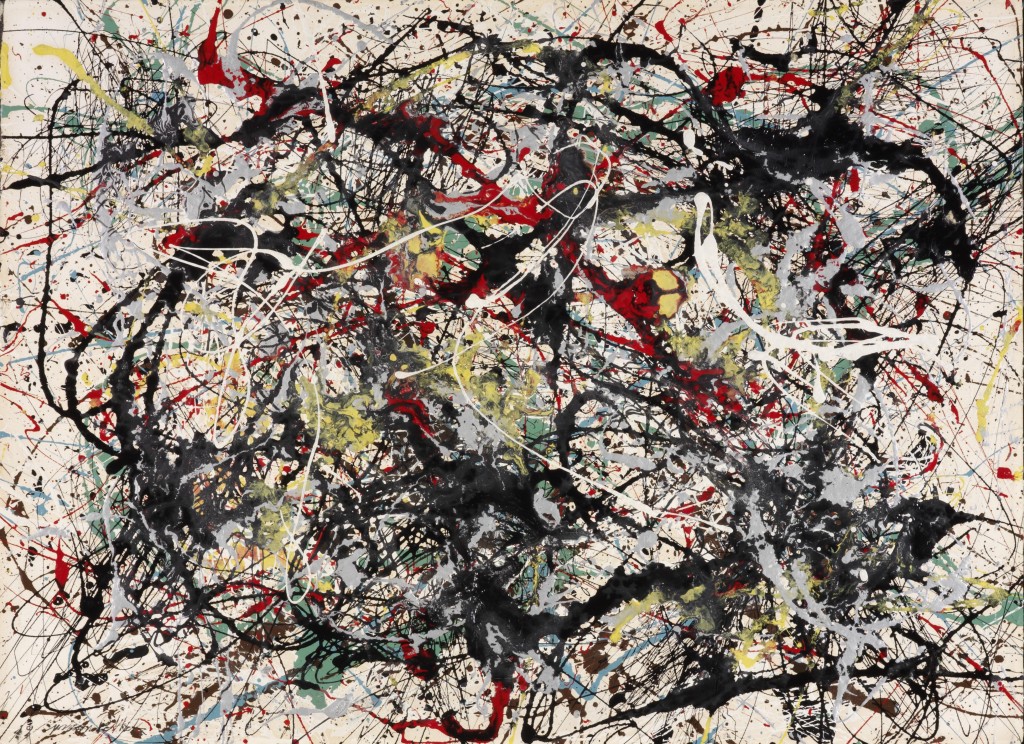 Prendergast to Pollock: American Modernism: Pollock No. 34 on display at the Everson Museum in Syracuse.

Edward Wales Root, a collector from Clinton, owned many of the artworks. In 1957, he donated 227 paintings to Munson-Williams-Proctor.

Prendergast to Pollock will also include six to 10 pieces selected from the Everson’s own collection. Paintings owned by the Everson, including works by Edward Hopper and Charles Burchfield, will be part of the exhibition lineup.

Similarly, a summer show featuring Canastota artist Susan Roth’s work from more than four decades will certainly display a slew of her paintings. She also will be invited to respond to works in the museum’s collection. 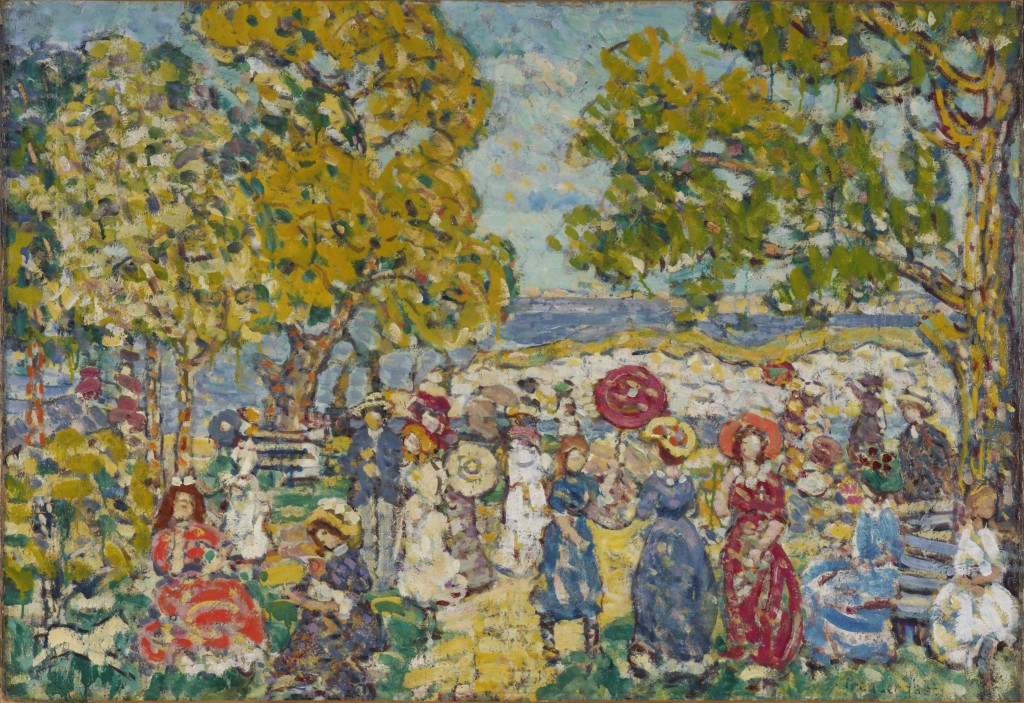 Prednergast Landscape with Figures on Display at the Everson Museum

And Dunbar has already begun planning for Three Graces, scheduled for September. She has asked three artists from New York City to work with the collection in some fashion. Although every aspect of the exhibition hasn’t been finalized yet, it will play off the Everson collection.

Those three examples aren’t a blueprint for every show that will hang on the Everson’s walls in the future. However, they illustrate Dunbar’s commitment to investigating the collection and creating excitement about it.

“We have to stick to a core mission and do it the best we can,” she said. “The Everson’s board has made it clear that they want us to pursue programming that will elevate the museum’s reputation nationally. We want to be able to originate traveling shows that will appear at other venues.” 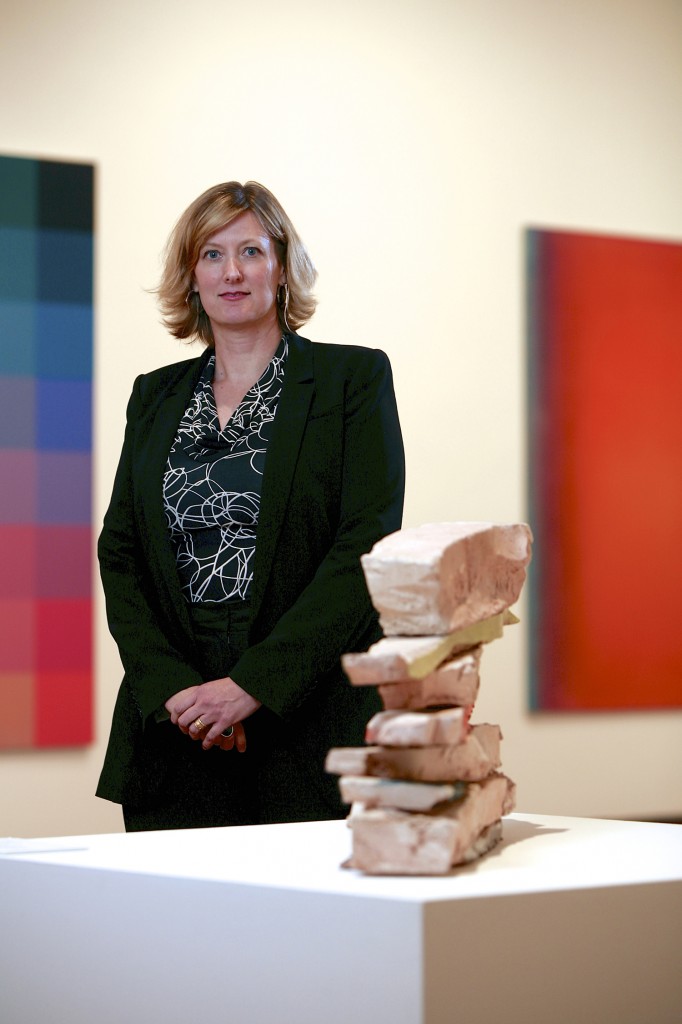 At present, Dunbar handles both the executive director’s duties and a curator’s tasks; for now, financial constraints make it unlikely a curator will be hired in the near future. As it happens, she has ample experience in that area, having worked in curatorial positions at the Los Angeles County Museum of Art, Kansas City’s Kemper Museum of Contemporary Art, and the Whitney Museum of American Art located in New York City.

Most recently she served as executive director for DiverseWorks, an alternative space in Houston, Texas. Dunbar coordinated programs that were, well, diverse. The facility commissioned Wu Tsang to create Moved by the Motion, a performance-installation piece that traveled in the United States and abroad. No One’s Dog involved collaboration with Barrio Dogs, a grassroots group, and other organizations around the issue of stray dogs in Houston. Ultimately, the project produced a display of photos taken by everyday citizens, and Rusty’s Journey: A Barrio Dog’s Coloring Book.

While Dunbar has often worked in bigger cities, she’s comfortable with heading a museum in a smaller market. “I think it may be possible to have a bigger impact in a smaller city.” she said.

Clearly, one facet of making an impact locally is to bring more people into the museum. Dunbar and members of the Everson’s staff are working on several changes to accomplish that goal. “Sunday Funday,” slated for Sundays, Feb. 8, 15, 22 and March 1 from 2 to 4 p.m., will provide activities for families with young children. There will also be monthly TGIF tours beginning at 12:15 p.m. on a Friday; upcoming tours take place Feb. 27, March 27 and April 17.

A third activity, “Baby and Me,” will offer monthly tours on March 6, April 3 and May 1, and is tailored specifically to parents with infants. “It’s going to give parents an opportunity to come in a half-hour before the museum opens to the public,” Dunbar said. “They and their babies will have time to take a tour on their own.”

In the same vein, the Everson is redesigning two rooms on the first floor. A room that was empty for several months is being converted into a lounge complete with comfortable chairs, complimentary wi-fi capabilities and reading materials such as books and magazines. The lounge is slated to debut Feb. 18.

Moreover, the cafe area is being reconfigured into a space where people can sit down and enjoy lunch they bring or prepared food served by the museum. It’s also fine to drink coffee and chat.

And there are other artistic projects under way. On Saturday, Feb. 7, the museum will open Women’s Work: Feminist Art from the Everson’s Collection from the 1960s and 1970s, a group show featuring work by artists including Miriam Shapiro, Barbara Kruger and Mae Stevens. It will be displayed in a first-floor gallery space. 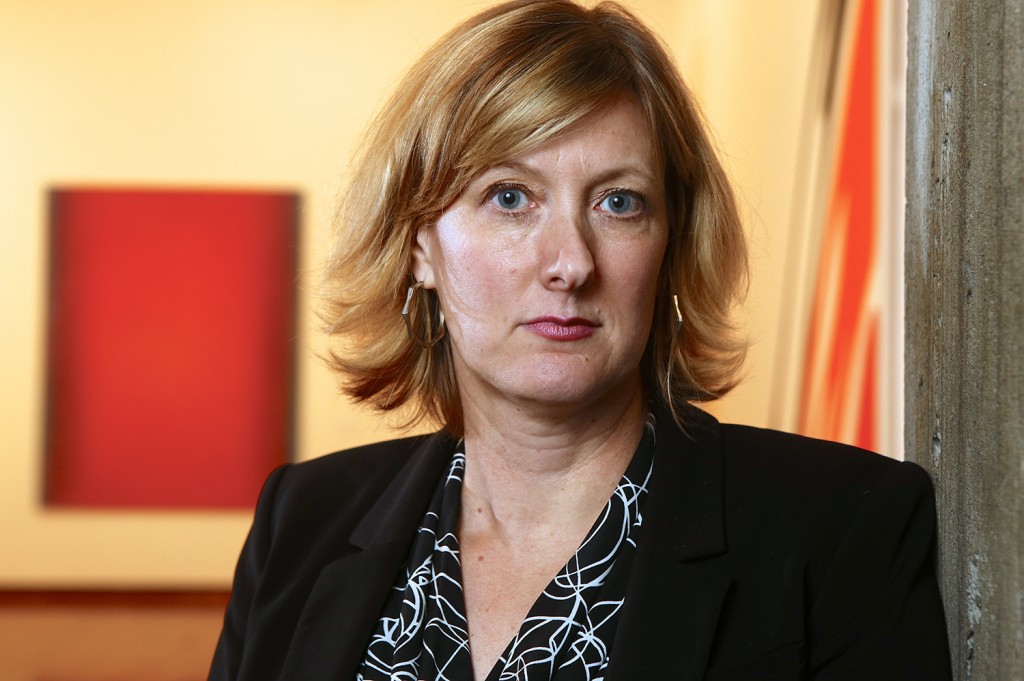 On a long-term basis, Dunbar wants to pursue collaborations with artists from upstate New York and around the country. She has worked successfully on such endeavors in the past.

Finally, Dunbar is realistic about the need for change at the museum and optimistic about its future. “The Everson hasn’t lived to its full potential yet,” she said. “We need to make that happen.”

Prendergast to Pollock: American Modernism from the Munson-Williams-Proctor Arts Institute runs at the Everson Museum of Art, 401 Harrison St., from Saturday, Feb. 7, through May 10. Admission to the show is $5 for members and $10 for non-members. The museum is open Wednesdays, Fridays and Sundays, noon to 5 p.m.; Thursdays, noon to 8 p.m.; and Saturdays, 10 a.m. to 5 p.m. For more information, call 474-6064.

Harper Lee’s second novel will be published July 14.
News and Blues
To Top