“It was the liberals who ruined Hollywood with all their whining and preaching.” So opines ever-blonde Polly Wyeth (Barbara Broughton), once a middle-level writer for MGM who now lives in elegant seclusion in a white-on-white showplace near Palm Springs.

The time for Other Desert Cities, Syracuse Stage’s season finale, is Christmas Eve 2004, as the U.S. occupation of Iraq, which Polly and her bearded husband Lyman (Ned Schmidtke) support, is turning sour. All this chitchat is part of the welcome back for East Coast daughter Brooke (D’Arcy Dersham), who dresses as though she might work in a food co-op. After a successful first novel, Brooke suffered six years of writer’s block. Now her second book is about to appear, and its nature has not been mentioned.

Audiences will quickly deduce that Brooke speaks for playwright Jon Robin Baitz in his much-lauded 2011 hit. Mother Polly, meanwhile, embodies much that the playwright would like us to reject. He has her say, a bit implausibly, “I hate being fair.”

Despite the abrasions of political and generational difference, all the Wyeths speak like characters in a Philip Barry comedy such as Holiday rather than a contemporary play. The Wyeths might not be Park Avenue aristocrats, having made their money in Tinseltown, but Lyman had been appointed an ambassador, and there’s an original Brancusi bronze at stage right.

Conservative audience members dreading an evening of GOP-bashing will be pleasantly surprised. When Baitz makes Polly the spokeswoman for the Other Side, he is obliged to give her more than her fair share of the best lines. So when we learn that Brooke’s new book will reveal a family secret about the death of her brother Henry during a Vietnam War protest, Polly might be taken aback but she’s rhetorically prepared to hold her own. It might come from director Timothy Bond’s call, but as the debate grows over what’s in the book and when it should be released, Brooke becomes more strident and smug, opening for Polly’s counterattack. 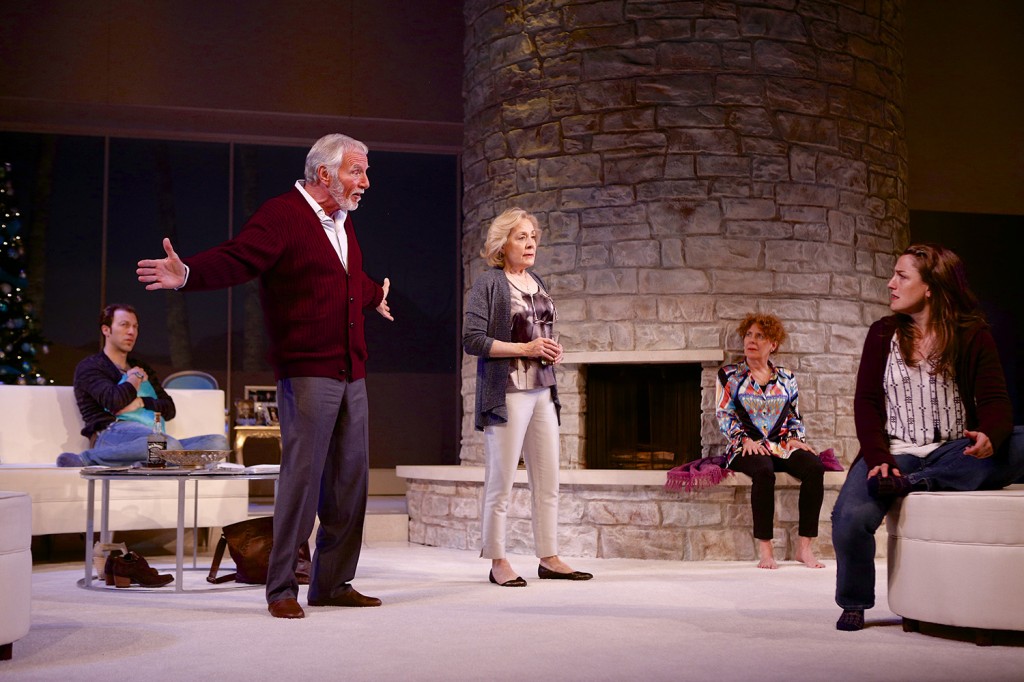 Other Desert Cities at Syracuse Stage

Two other relatives live in the Wyeth household. Surviving brother Trip (Joel Reuben Ganz) dresses in tennis whites like his parents, but to their disdain, works in reality television. His courtroom show features an experienced judge presiding over a pretend session where plaintiff and defendants squabble. With a native instinct for irony, Ganz’s Trip raises questions of how much truth can be discerned in any presentation. Father Lyman made much of his living in his prime with a balletic dance of death during gunfights in westerns. On cue, he can even perform it now.

The fifth member of the household is Polly’s estranged sister Silda Grauman (Dori Legg), a political lefty who co-wrote comedies back at MGM before sliding into alcoholism and poverty. Barefoot and clad in brightly colored duds, Silda looks like a scene-stealer who has been introduced to tell the truth. She says, “Palm Springs is not a refuge. It’s King Tut’s tomb, populated by mummies with hands.” Her antagonism for Polly seems to have rubbed off on Brooke, but while she is sympathetic with Brooke’s concern for Henry’s death, she does not have any new insight. Instead, she grumbles that Polly repressed her Jewish origins and has gone all the way to goy.

Other Desert Cities has been a prestige hit, opening off-Broadway and moving to Broadway itself eight months later. It was nominated for both a Tony and a Pulitzer, very likely for its sparkling dialogue. It did not win, however, perhaps because of structural weaknesses that become more evident on second and third viewings. There’s a clunkiness in the first act, especially in the exposition concerning Henry’s death that Bond’s direction does not alleviate. And the Big Secret at the end feels unmoored to the tensions Baitz whips up in anticipation.

Even though conservatives will be relieved at the splendid defense Barbara Broughton’s Polly gives for their causes, especially how drugs soiled the American century, liberals can rejoice at the sharp body blows that D’Arcy Dersham’s Brooke gives for rightist delusions. In this production, however, it felt as though Joel Reuben Ganz connects most effectively with the playwright’s sentiment. Brother Trip has been a thankless supporting role in other productions, but not so here.