(REVIEW) The Will Rogers Follies: A Life in Review

As a folksy but astute humorist, Will Rogers lies between Mark Twain and Garrison Keillor, but was far bigger in his heyday than either. Yes, Rogers in his lifetime was bigger than Twain. When he died in a plane crash in 1935, an event ominously foreshadowed often in The Will Rogers Follies, an otherwise sunny tribute show at Auburn’s Merry-Go-Round Playhouse, the entire country came to a mournful halt.

That’s because Rogers was in show business. Before the term was invented, he was the king of all media: radio, books, newspapers, movies and especially the Broadway stage. That’s why the full title of the show is The Will Rogers Follies: A Life in Review.

The emphasis on “Follies” is immediately apparent from Kelly Tighe’s eye-catching set featuring a gigantic (and precarious) staircase, wonderfully lighted by Marcia Madeira. Rogers modestly explains that his role in the Ziegfeld Follies was to fill in the time while the many women in the production changed their skimpy costumes. Gradually his wit came to outdraw the skin. Peter Stone’s well-constructed book and Cy Coleman’s score are always clear about which came first. Will Rogers Follies might tell about the improbable rise of a half-breed hick from impoverished Oklahoma, but it is fundamentally a dance show, originally choreographed by Tommy Tune, here revised and enhanced by director-choreographer Ann Cooley.

Having an established star appear as Rogers favors the triumph of wit. In recent years the Merry-Go-Round has announced after the season begins that a performer known from television will be appearing later in the summer. It would be a grave mistake, however, to link Tom Wopat only with The Dukes of Hazzard, the decades-old TV series. As a Wisconsin-born Czech-American, he’s not even a Southern good ol’ boy but has mastered several regional accents. For the past 30 years he’s been active in movies and on Broadway, both singing (Catch Me If You Can, Annie Get Your Gun) as well as dramatic roles (Glengarry Glen Ross and A Catered Affair, the latter garnering a Drama Desk nomination). 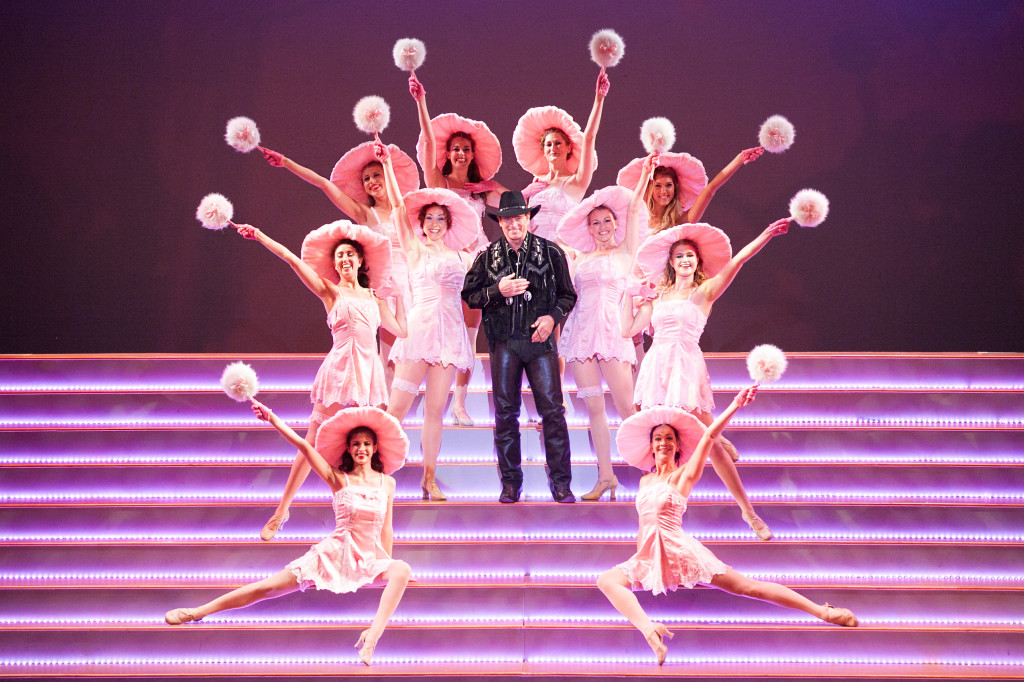 Wopat’s star power lies not simply in his good name but the sharpness and proficiency he brings to everything he has to do. He makes the vocals sound better than we remember them. Although the show was one of Cy Coleman’s biggest hits, running for three years (1991 to 1994), it lacks a genuine hit song. Thus Wopat is most impressive in some of the throwaways, like the second act’s “Look Around,” as well as the better-known “Give a Man Enough Rope” and “Never Met a Man I Didn’t Like.” He’s hilarious in the sit-down, patty-cake ballet number, “Our Favorite Son.” His comic style hits the mark without trying to mimic what we recall from old recordings, but he does come off a bit like a friskier, better-looking Tommy Lee Jones. Wopat even passes muster with some rope tricks.

Much as the lead has his name in the title, Will’s delivery often relies on the strength of three important supporting players. Elisa Van Duyne might seem a trifle elegant to be Betty Blake, Will’s wife, who retains her maiden name. As with Wopat’s numbers, Van Duyne’s delivery improves the score in supportive wife solos like “My Unknown Someone,” ”My Big Mistake” and “Without You.” Coleman and lyricists Betty Comden and Adolph Green allow her to cut loose in the second act with an improbable but arresting torch song, “No Man Left for Me.”

The second woman goes by the name of Ziegfeld’s Favorite (Gabrielle McClinton). Part narrator, part temptress, part cheerleader, she bears a certain kinship to the Emcee in Cabaret. Although she leads a big number early in the first act, “Will-a-Mania,” she is less demarked by her singing than her dance moves and struts, some of them exaggerations of the sexy sashaying producer Flo Ziegfeld favored on the floor. As McClinton embodies the Favorite, she cannot enter a scene without dominating it.

Steve Luker, who may be younger than Wopat offstage, plays Will’s father Clem, as seen by the youthful entertainer. No warm and fuzzy Ward Cleaver, Clem is the abrasive flint against which Will ignites his spark. Luker’s own spark shines brightly in three musical numbers, especially “Clem’s Return.”

Production values are high, as Bruce Turgeon’s costumes reawaken the glitz of 1920s Broadway. The eye-filling opening number, “Let’s Go Flying,” dazzles with art deco images of Will Rogers’ Indian heritage, one of the best things in the show.