Moisés Kaufman’s The Laramie Project is a folk epic, running three hours (with two intermissions), with 25 performers in about 65 speaking roles. After the widely publicized October 1998 murder of gay student Mathew Shepard, 5-foot-2 and barely 100 pounds, Kaufman went to interview about 200 people in the Cortland-sized college town in southeastern Wyoming. He trimmed the testimony down to what we hear, allowing contrasting views to be addressed.

For this Central New York Playhouse production, novice director Justin Polly – who reminds one of the mountain climber who gets started by scaling the Matterhorn – manages all this talk by having the entire cast sit on the stage most of the time, politely as if at a Quaker meeting. Several devices vary the tone and pace of what we hear, such as projected titles and shots of Laramie on a screen upstage, and a television screen for excruciating statements from public figures. Polly’s success is measured by how much all these words still hold us and the emotional and moral wallop of the third act.

Mono-ethnic Laramie is not a microcosm of America. Its High Plains frontier glamour long since faded, it has also been abandoned by the railroad. The only good-paying jobs in town are at the university, and everyone else is on minimum wage. Class conflict simmers near the surface. Killers Russell Henderson (Dusten Blake) and Aaron McKinney (Jesse Navagh) scramble to pay for their drinks with small change and resent Shepard as “rich” because he can afford to hire a limo to reach a gay bar across the state line.

Director Polly started out with a core of strong company regulars who can do no wrong. They include Jim Uva as an anguished public official, Emily Lawson as a Muslim student in headscarf, Dan Rowlands as a closeted gay student, Kimberly Panek as concerned Amanda, and Binaifer Dabu as a wisecracking waitress and a stern judge. 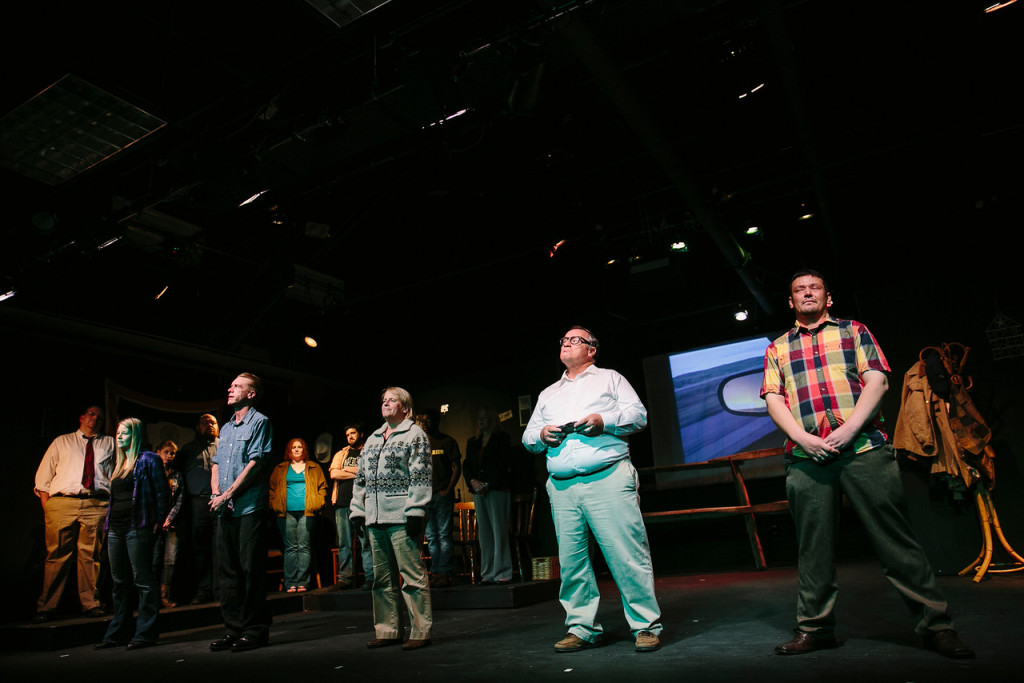 For other significant roles Polly has imported mostly new voices who make riveting impressions. Strongest of these is lanky David Spiro, previously active in Rochester theater. His tough-talking limo driver allows for no BS. Robert Edwards speaks as a gay student actor who benefits ironically when the drama department schedules Angels in America. And Colleen Deitrich compels as the weak lesbian who finds her spine.