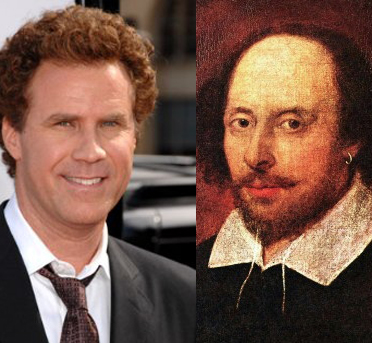 Well, with The Bard’s words, anyhow

Will Ferrell taking on William Shakespeare.

A midsummer night’s dream for the 12-year-old in all of us or every serious drama lover’s biggest nightmare?

Cinema Blend reporter Gregory Wakeman wrote Tuesday that a comedy is being developed by SONY that will star Will Ferrell in the midst of a whole lot of words written by William Shakespeare. “The currently untitled film follows the story of a Shakespearean theater company hell-bent on doing the Bard justice,” Wakeman writes.

He adds that Variety reports that David Guion and Michael Handelman have been hired to write the script. Wakeman dumps on that pair for failing to earn major yucks with big stars in Dinner for Schmucks and The Ex, labeling those as “instantly forgettable.”

But he adds a bit of optimism by throwing in the detail that the duo’s rep may be salvaged if their latest, Night at the Museum: Secret of the Tomb, cha-chings and/or resonates when it debuts on Dec. 19.

Of course, Will reciting William could be the secret weapon regardless, writes Gregory: “Perhaps Will Ferrell being attached will somehow match perfectly with the two screenwriter’s wheelhouse, allowing them to produce a hilarious screenplay. We’ll just have to wait for more information …”

I have a blogging friend who’s agog about the recent arrival of the Star Wars 7 trailer.

Austin Hodgens writes from The House on the Hill in Maine. The Return of the Modern Philosopher is a humor collection of note from a man who’s a graduate of the NYU film school. And who’s a screenwriter who has sold scripts, one of which, The Retirement Party, was purchased and filmed, the whole nine yards. (Speaking of trailers, I’ve watched the one for that film, and was disappointed to learn that business and politics stalled its release.)

Austin wrote after the Star Wars 7 trailer came out that “it broke the Internet.” He obviously thinks Star Wars rules. He’s also been known to blog-comment-jab at me at markbialczak.com after I confessed that I have not seen any of this storied franchise.

The Force wasn’t my bag back in those days, I was cash poor in college when the first one came out, too busy working day and night at my first job when the second was released. Yadda yadda yadda.

So in an attempt to stay current, I discovered in a story by Cinema Blend reporter Kelly West on Tuesday that a report on iFilm states that a new Star Wars 7 trailer will be attached to a movie, a theatrical release film, a picture that will allow said trailer to be viewed by the legion of Star Wars fans on a really big screen.

This film is Avengers: Age of Ultron.

Of course, as everybody (except me) in the world has been fanning their flop sweat about for awhile, Star Wars: The Force Awakens will open in theaters on Dec. 18, 2015. That gives me a year to catch up on the longish back story.