Last month registered the lowest UFO sightings for the month of May in seven years. New York state and the rest of the world have been witnessing an upward trend in UFO sightings since 2010. In 2015, the trend for UFO sightings dropped off. The dip wasn’t exactly unprecedented. There’s an occurrence known loosely in Ufology circles as the ripple effect.

UFO sightings tend to rise and fall in six- to seven-year patterns. Many of us thought the 2015 dip was the start of a short downward trend associated with a classic ripple. 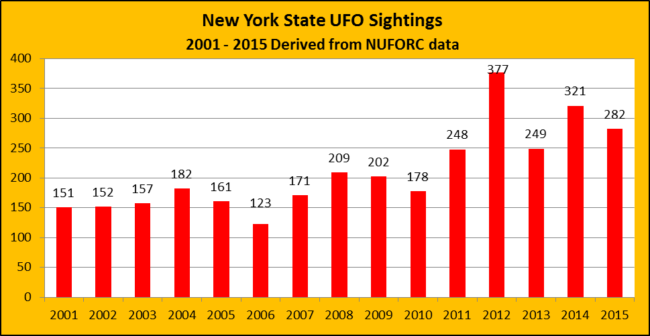 Then came 2016. I was looking at sighting numbers for the first five months of the year and noticed a lower number than expected. More interesting was the severe drop-off in sightings in May. 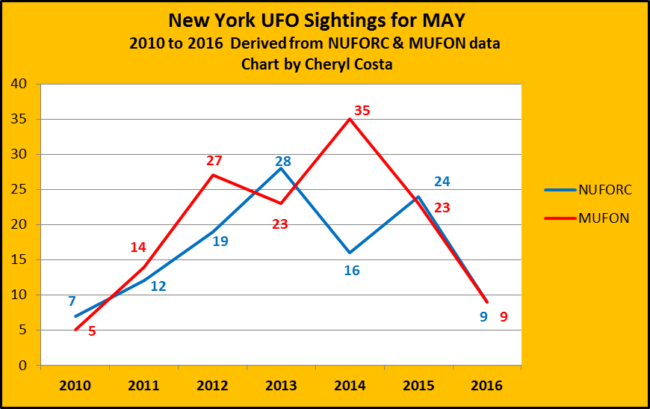 The month of May has traditionally been the start of the “high season” for UFO sightings in New York state after the low sighting winter months. As I dug deeper into both the NUFORC and MUFON databases, I could see the lowest May sighting numbers in seven years. Could 2016 be the traditional dip in the UFO sight ripple cycle?

I decided to consult with another Empire State UFO investigator Bob Long (former NYS asst. Director of MUFON) for an opinion. Long while intrigued by the chart and leaned toward a more down-to-earth reason for the apparent drop-off in UFO sightings.

“Times of year, weather and busy times of year affect sighting reports. If you never look up, you are unlikely to see something in the sky that you cannot identify,” Long said.

During our chat, the idea was raised that May 2016 was colder than usual. Perhaps like the winter months, people just weren’t outside looking up.

In the back of my mind, the question still haunts me: Where did all the UFOs go?

May 20, 2016: At 11 p.m., a resident of Brooklyn witnessed two orange spheres flying northwest over Brooklyn.