(Blog: Inevitable Coffee Ring) Sometimes we put ourselves in roles, others/friends put us into roles.

Expectations. Roles. We all have them. We can sometimes fall into them.

Societies have expectations, and all religions do as well and this includes non-religions (I abide by Dudeism) or atheists. Others and especially our bosses (an example, one of the many societal roles) have expectations. Most of us–that acknowledgement that not everyone is sadly and probably is true–have to live up to a certain standard.

Sometimes we put ourselves in roles, others/friends put us into roles. Culture, entertainment especially, can create models or characters that we can somewhat relate to and laugh about the mannerisms. My friends and I, while growing up, had a bulky Rolodex of names of characters we’d try to relate to, ranging and maturing from childhood-associated Teenage Mutant Ninja Turtles to the Friends characters or the gang in American Pie. There were all those ridiculous online quizzes to boot.

However, there are specifically the Barney Stinsons, the Joe Tribbianis, the Steve Stifflers, and whatever redundant ass-hat role that David Spade plays.

“Hey! You’re talking to my guy all wrong.  It’s the wrong tone.  Do it again, I’ll stab you in the face with a soldering iron.”

Walken. Joe Dirt quote? Seriously? It’s a bit much. My tone, however…that can be switched.

Syracuse is a small enough city where you can stand out. It’s your decision. What you do, where you are, who you are with, how you act, and what you’re wearing–among other things–can be remembered. It’s key to not do anything loud or crass. If you do something stupid, it’s probably best that you own it. If you’re feeling judged, take a good look at what you’re doing. If you’re looking for privacy, you’re not going to get it. The irony of privacy is that you seem to have more of it in a larger city–you can blend in and travel through life with the rest of the nameless or average Joes. In a larger city, it’s easier to blend in and display your independence.

The only time I’ve truly felt out of place was at a market in Shanghai. That story is for another time.

Regardless of where you are, no one is going to really bother you if you’re not bringing attention to yourself. At most you’ll be remembered as the person eating by themselves at the bar of Empire Brewing Company (due to not wanting to cook that night), reading a copy of a magazine or newspaper while keeping to yourself. As long as you’re not shouting, talking obnoxiously over the phone while you’re stuffing your face, spitting food everywhere, cursing, throwing objects or partaking in some other belligerent activity (trying to break open a fire hydrant) you are in the clear. Wearing pajamas out of your house or some other unconventional apparel may bring you some unwanted attention. To each their own, as they say… whoever they are.

Regardless, your comfort and independence will be looked upon with jealousy. People–not all, of course–wish they could be more independent, but they aren’t; they are intimidated by it–the notion, the smell–and doing something by themselves in small ol’ Syracuse is second-guessed. I don’t want to look like a loner or a fool–you’re not.

It’s fun to keep people guessing. It’s not fun to scare them.

I met up with friends with the pseudonyms, Bobby and Chaz, and their aliased partners, Amy and Bridget. These people are part of a standard group that I associate with, and there are usually more people present. The trio of Bobby, Amy and myself met up at Chaz and Bridget’s for the year’s first fire (which must be a thing seeing as how people posted and boasted pictures of their fires on various social media outlets). Chaz was grilling up his specialty burgers with was resisted by yours truly at first, but my resistance was futile. Instead of having a burger just sit there, get cold as it ponders it’s existence, it may as well be consumed and enjoyed by taste buds and a stomach. New people, good people and a dog, were also met that evening. The fire was hypnotic. It’s as soothing as sitting in an Adirondack chair and staring across a lake.

Ah, camping! Don’t get me started.

Before ending the night with a Guinness at Rosie’s, we hung out at Bobby’s (I keep laughing when that name is written) apartment where the host said to me: “If you were in a mafia movie, you’d be the good looking character…who would get killed off early…it would upset some people.” (My friends are eloquent and choosy when it comes to endearment.) On the walk to the sports pub, Chaz brings up my being a bachelor and how they’re (the four of the them) going to live vicariously through me. Chaz has a great sense of humor, but he did step back with his tone of voice that clearly said: give this consideration.

We laughed at the bachelor comment. It was mentioned on my part that it’s strange. I’m not with the group of people wanting to be single. There is no playing the field, and there is no getting laid constantly. I’m not telling you readers when the last time that happened, but it was a bit ago. With that being said, there are no elaborate or boastful tales of my exploits. The only fucks considered are the fuck-ups, learning from and not wanting to go through them again. However, this actual group of friends along with a couple other circles, defines the television-culture-embraced two couples with that single-guy-friend.

And, to be honest, I feel my designation sometimes inconveniences them.

There is no fishing for pity with my stating that, or this…

Single life been different since this last October. At that time I very briefly dated a girl, who after a couple times hanging out, latched onto me like static electricity from a head-rubbed balloon attaching itself to a wall. We held hands constantly, we’d sit close to one another, and those are two examples of the minor public displays of affection (PDA’s) that would spark between the two of us. Despite taking notice of this, there wasn’t anything said on my part. It felt amazing to be adored, but a part of me was still uncomfortable; this attention had to be gotten used to.

One of my worst qualities that I’ve been working on: I scare easily. If at any point I am uncomfortable in a relationship, I have tendencies to distance myself and jump ship. Water is water, freezing or scolding, and your body will get used to it after a few minutes. Like many others have done–yours truly is not the first and won’t be the last–it’s easy to not call off or wean yourself away from a relationship. After three weeks, her cornering me in a car during a drive back from the Catskill region felt more demanding to know where our exclusiveness sat. There was no seeing anyone else at the time–dating a couple people at once is not really fun to me (screw you, dating sites)–and there was confidence there would be no accusation of tomfoolery. However, this extra emphasis about our being official, it felt belittling in the sense that I should have brought it up a week prior, allowed the car air to smell sour. Instead of taking the time elapsed into consideration, my mouth zippered shut in panic; she kept poking at that obvious elephant. My feeble responses tripped over my uh… uh… uh… teeth.

Some people take time when it comes to putting a stamp on a relationship to define it as exclusive. I think dating over a month is an appropriate length of time.

After that chapter ended, a few close friends who met the girl told me their concern of picking up on her clingy nature, but they didn’t want to tell me since I liked her. Hey, others said that c-word and not me.

Looking at the bigger picture: it’s best to just speak up and mention feeling uncomfortable should it arise. Some people like to break the bad news, and some definitely do not; just bite your lip and rip off the band-aid.

We read blogs about life, and there are many women out there writing about dating life in the big city. I read many women bloggers, and I’m not afraid to admit it. It’s given me some clarity about things. Listening/reading has been fine tuned. However, some of the blogs can be pretentious–writers with the desire to be the next Carrie Bradshaw with gang in tow–and some of the writing is wholeheartedly honest.

A fellow blogger/writer that I follow, Matt is his name, writes at Must Be This Tall to Ride. He’s a guy in his mid-30’s who came out of a divorce, and he writes about writing in general, about many aspects of life we all can relate to, returning to the world of dating, moments he cherishes with his child and sharing custody, and he opens up about internal post-divorce dilemmas. He’s not a pathetic sap and not looking for attention, but he’s using the creative space as an outlet; and there are probably other guys out there going through the same thing. Granted, I have not experienced what he has, but we have enough in common as people to relate and applaud each other’s writing ventures. It’s about support.

Alas, off topic is where we stray.

However, there are those instances where you’re feeling down in the dumps. But you make eye contact with someone. You reciprocate smiles. You exchange humorous banter about something. You. Both. Laugh.

Or perhaps you know the person already. You don’t expect anything, or push anything relationship-related with the person. Yet you converse. You have a good time. And, to give you a tidbit from my perspective, you run into her and you lose a little bit of air, enough to make you feel lightheaded, and a thought swims in your mind–Wow, she’s truly beautiful–right before the curtain drops or the screen blacks out…

Moment(s) of the Week

Where can you eat good sushi off plates surrounding a scantily clad woman? Welcome to Syracuse Fashion Week. It’s been done over and over for a few days, however–the fashion week, not the table setting. 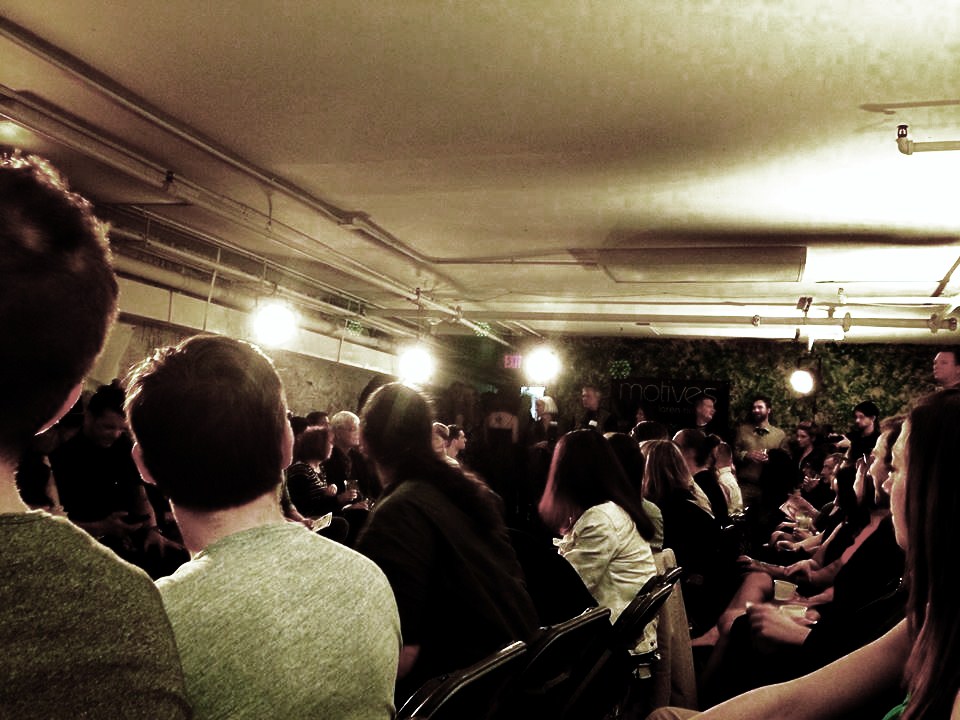 For those who did not realize that Syracuse has a fashion week, please raise your hand. (Pssst. No one can see you, so raise it and wave it proudly. Doesn’t it feel good to be honest with yourself?) The week-long event celebrates our local clothing stores around Central New York, and proceeds donated to the Food Bank of Central New York. This wasn’t the first go for the Fashion Week, which is an essential part of the local-minded strength our region offers. Going blindly into Thursday night’s Underground event.

Jim Sheridan played a great acoustic show at Creekside Books & Coffee in Skaneateles. I got to hang out with a bunch of adults, who I haven’t seen in a few months. Some writing was done, accomplished for this week’s post and scrapped in its entirety, leaving me (and you) with this post. Coffee, as always, was drank and enjoyed. The Rolling Stones. John Prine. Many others. Enough said. 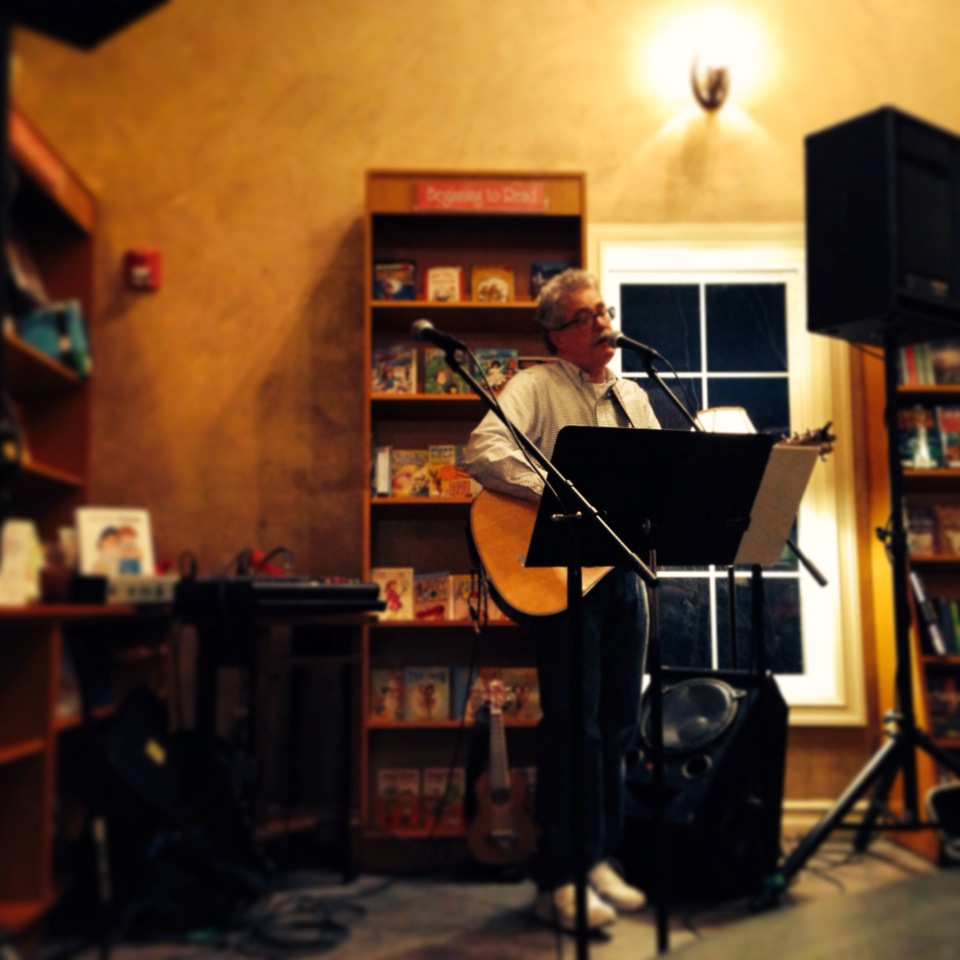