And don’t call her “Grandma.” That would be too sweet. Prefer instead the childhood mispronunciation “Bammy.” Contained within it is the springboard for many puns, like, “Bam! Here’s a rhetorical smash to your nose.”

Steel-smiled domestic tyrant Bammy Lewis (Kathy Burke Egloff) strides the scene in a too-tight scarlet dress with prominent décolletage. In her bosom the milk of human kindness long ago curdled. When late-arriving son Dean gasps that he has just driven in from Niagara Falls and he barely beat the storm, Bammy purrs, “It’s a pity you didn’t drive slower.”

A December evening with the Lewis family, an apparently lower-middle-class Central New York clan of no particular ethnicity, offers us the kind of Christmas Scrooge was warning us against until he ran into Marley’s Ghost.

This world premiere comes from the pen of community theater actress Joleene Moody (The Man Who Came to Dinner, On Golden Pond). A few years ago the playwright was known as Joleene DesRosiers, a local television reporter and anchor. In interview, Moody admits to having created the script in 1997 but let it sit until it was taken up by director Korrie Taylor, well-established with the Baldwinsville Theatre Guild.

Visiting Bammy Lewis is under the Central New York Playhouse aegis, but Taylor’s husband Josh Taylor, another Baldwinsville Guild regular, constructed the set. Except for the title character played by Egloff, the hardest-working person in community theater, and Playhouse regulars Heather J. Roach and Phil Brady, most faces in the capable cast are unfamiliar.

Although Taylor’s gag-a-minute pacing implies farce, something resembling a plot begins to develop almost without our noticing it. Bammy, always seen with a cocktail glass in her hand, is welcoming guests to a holiday soiree, along with her milquetoast second husband John (Mark Baker). Bald and smiling, John at first looks like Bammy’s piñata, borrowed from a different holiday. As events unfold, John’s reactions are seen to be kinder and gentler than Bammy’s, but he’s slow to get traction for what is called elsewhere the Christmas spirit.

First through the door are Bammy’s impoverished sister Jill (Hinda Crewell) and her near-sighted husband Leon (Bruce Grieshaber). After we see Leon bumping into the furniture, he is asked, rudely, if he is blind, which he appears to be. Immediately Leon takes a tumble behind the couch and is then immobile for about an hour. His hand is nonetheless seen over the top of the couch, yet he continues to participate in dialogue, a shtick playwright Moody does not tire of exploiting.

Jill and Leon have sold everything to invest in lottery tickets. The motif of fate and chance lies dormant for a while, but toward the end of the second act we learn how many people, not just Jill and Leon, are holding lottery tickets. Still, Jill has contributed a pecan pie to the evening’s festivities, only lacking pecans she has made her pie with beer nuts.

The arrival of the next generation increases the shouting and tension. Bammy’s aggressive daughter Danielle (Becky Hall) brings along her vacuous current boyfriend PJ (John Krenrich). The soul of decorum, PJ has a telling way of raising his jersey with a loose thumb, thus exposing his hairy belly. PJ crams his mouth with cookies and appears to be choking when the ensemble thinks up a novel solution: PJ must thrust his arms straight up to dislodge the wad stuck in his throat. As happens in comedy, PJ’s arms are now stuck in this position, a posture Krenrich gamely supports for the next hour or so. 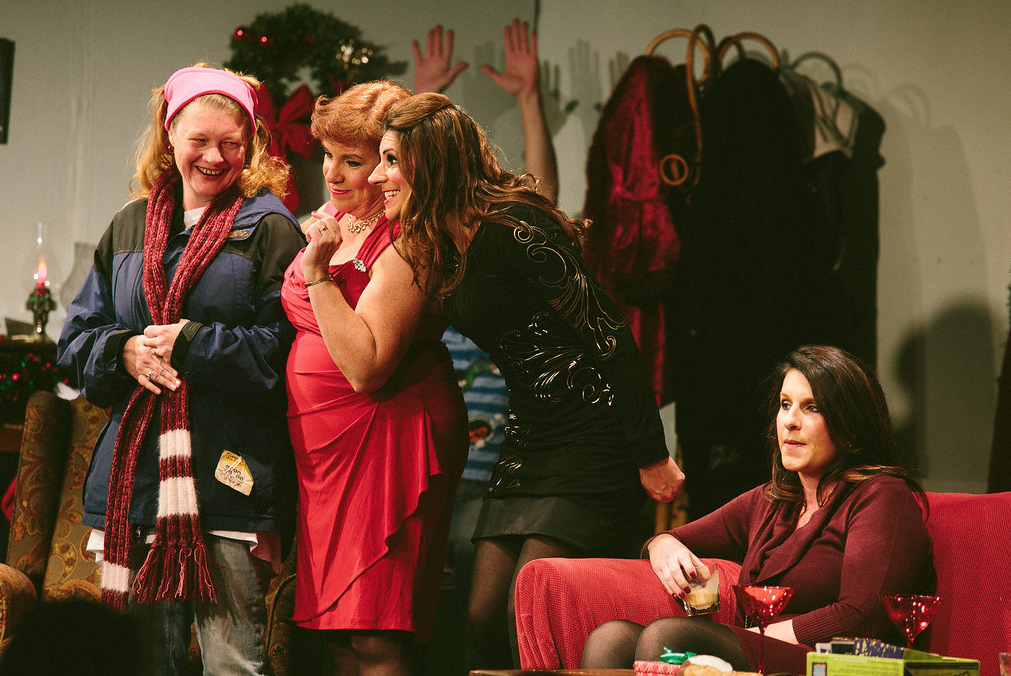 Son Dean (Robert D. Miller) from Niagara Falls arrives with his wife Amy (Anett Marcarian), but the parents leave the children out in the cold; the car engine is still running. They are followed by more characters (played by Heather J. Roach, Bill Lee and Phil Brady), unrelated to the family, just to make sure there is not a slack moment.

Again in interview, playwright Moody has said that every character in Bammy is based on someone she knows. She has 11 cases of comic retribution. The laugh is on them.