In what is becoming an annual sign of spring in Armory Square, the resurgence of vinyl will again be celebrated on Saturday, April 18, during the eighth annual National Record Store Day, hosted locally by The Sound Garden at 310 W. Jefferson Street.

Record Store Day celebrates the special connection between independent music shops and their customers, with rare, one-day-only exclusive vinyl albums available for purchase. Recurring and new fans will seek past favorites that are difficult to obtain, as well as newly released recordings created for the event. 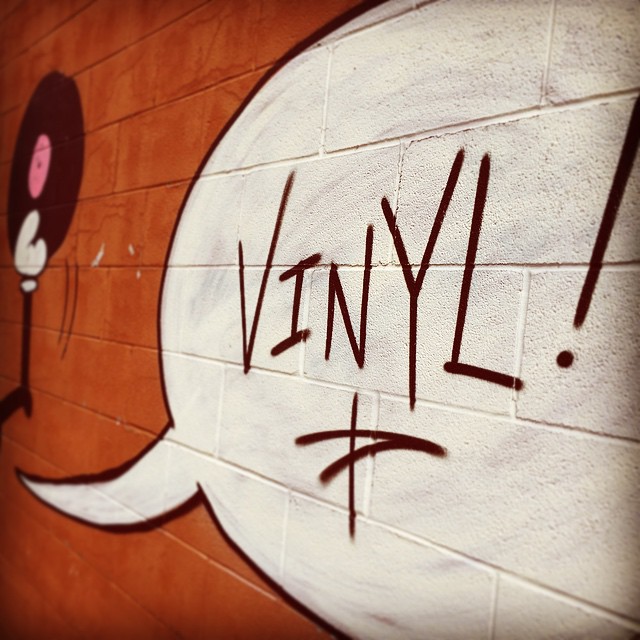 Tommy Lincoln’s art on the side of The Sound Garden in Armory Square.
Photo: Robyn Stockdale

The Sound Garden will open at 9 a.m. on Record Store Day, and if past experience holds, people will begin lining up Friday night. Sound Garden is the only store in Central New York participating in the event, causing an increase of attendance each year.

“I found my calling in the back bin of a dark, dusty record store,” says Dave Grohl, the lead singer of Foo Fighters and this year’s Record Store Day ambassador. Many people can agree with Grohl that vinyl records influenced their lives.

Vinyl enthusiasts maintain that listening to music in its purest form on vinyl shouldn’t be traded for the convenience of digital formats, which dull the audio quality. Many vinyl records now come with free digital copies of the album, thus proving that both formats can coexist without making the other extinct.

The ability to understand music as an opportunity for social interaction and connection, rather than as a commodity to purchase, is what keeps independent record stores alive. People want to hear the newest trend in vinyl, the newest acts, and the artists that aren’t necessarily in rotation on Spotify.

“I’ve been fortunate enough to have the opportunity to rediscover this sense of excitement,” notes Grohl, “that magical feeling of finding something all one’s own, by watching my kids go through it.” The passing-on of a cherished pastime to future generations is vital to the resurgence of vinyl and the true connection to music.

Notable releases for this year’s Record Store Day include Untethered Moon, Built to Spill’s first full-length album since 2009’s There is No Enemy; Mumford and Sons’ seven-inch EP Believe/The Wolf, with two unreleased tracks; the White Stripes’ Get Behind Me Satan, available on vinyl for the first time; and the Black Keys’ Meet Me in The City, a cover of the classic Junior Kimbrough blues song and limited to 1,000 copies. Releases by Foo Fighters, A$AP Rocky, Florence and the Machine, and Noel Gallagher of Oasis will also be available.

If you don’t own a record turntable, Sound Garden will have them for sale. Still, nobody has a clue what vinyl platters will be coming to the Armory Square shop. “We never know what we do and don’t get until that day,” warns Ryan McShane, a longtime Sound Garden employee, which makes the Record Store Day experience more organic and exciting.