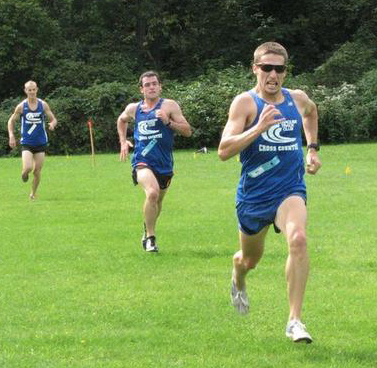 With the finish line in sight, Fred Joslyn held nothing back.

The Syracuse Track Club member unleashed one last kick en route to winning the 18th annual Steamtown Marathon, in Pennsylvania, on Oct. 13. Joslyn, of East Syracuse, finished the 26.2-mile race from Forest City to Scranton in 2:22.08, two minutes ahead of runner-up Peter Kemboi.

For Joslyn, 29, winning his second career marathon was an emotional experience. He won the 2011 New Orleans Marathon in a career-best time of 2:18.49.

“It’s not only the strain of racing 26.2 miles, but it’s the thousands of miles you put in to prepare for race day,” says Joslyn, who finished third in the Steamtown in 2007. “When you work that hard toward something, it amplifies both the good and the bad, so winning is just an overwhelming experience.”

Joslyn, the father of two who has never taken a day off from running in nine years, answered a few questions about his win and running.

On his race strategy: “I wanted to put myself near the front of the race, and try to stay as relaxed as possible in the first half of the race, then really push the second half with the goal of winning. Being in such a close race, helps you to stay focused and really get the best out of yourself. I was really sore after the race. I pushed the hills at the end to secure the win, which left my legs in a lot of pain after. Of course, all that pain is worth it.”

His pre-race routine: “My routine is to be flexible and adjust to every situation. I do a very short warm-up because I want to save all my energy for the race. I think many people do too much before a marathon and actually start to tire before the race even begins. When you’re racing 26.2 miles, you don’t need to do anything extra.”

First indulgence after winning: “My wife, Shelby, and I stopped at Five Guys after the race for giant burgers. I also had Taco Bell the next day.”

Best running advice he’s ever received: “It’s from Tom Carter, who is a great friend of mine. His advice was ‘Chase your dream.’ It’s really simple, and it’s applicable to more than just running.”

Favorite running spot: “My favorite place to run is the Erie Canal. The dirt path is a straight, flat trail that goes for miles, I love just getting into a rhythm and letting the miles click by.”