Art and dining merge at this venue, since the chef and owner is also a sculptor.

Tash Tashkale, known locally and globally for his dynamic metal sculptures, has recently embarked on a new creative venture: a restaurant – Flame – of which he is chef and owner.

The establishment, distinctive both for its original interior design and for its food, had a soft opening on July 25. Those in attendance, many from the art community who were curious to view Tashkale’s latest sculpture while dining on his food, were not disappointed.

Don’t look for a fancy building, though. Flame, 713 E. Fayette St., is around the corner from the Crowne Plaza, at 701 E. Genesee St. The venue has a very unimposing exterior. A flat roofed squared-off edifice, with a brick façade, it sports a glass front on either side of the entrance. It was probably a neighborhood grocery store or deli in a past life. 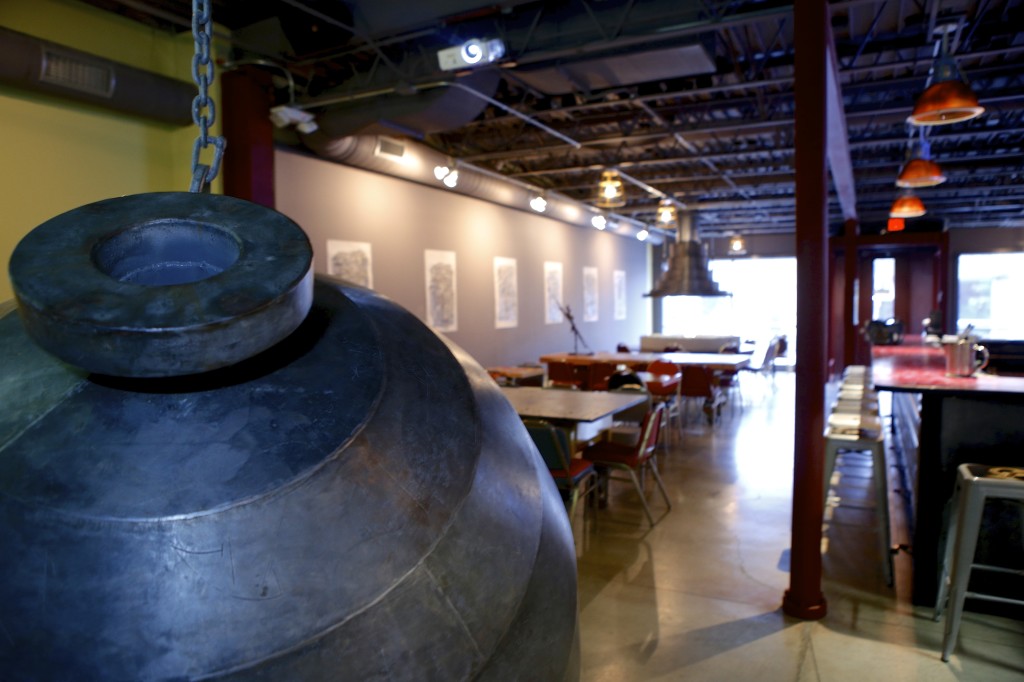 But inside is another story. The room, which once served as his studio, has been a two-year artistic effort for Tashkale. He still has a studio on the premises; it was relocated to the second floor.

Enter the one-room space for a “wow” experience. Tashkale’s work uses metal to forge a 12-foot ceiling, a grid of crisscrossed and interlocking steel, with circular lighting interspersed in between. A massive fire pit, fashioned by Tashkale from a single piece of Vermont granite, is not only an art statement but emits real flame on demand.

Square metal tiles are tabletops, meant for two diners, and a long communal-sized slab seats up to 10. There is seating for 50, although private parties, alternately sitting and standing, can accommodate 90.

What bears comment is Tashkale’s standout artwork in the room. A massive metal globe that hangs from the ceiling on a chain could be the inspiration for the one that Miley Cyrus swings atop in her provocative and revealing performances.

An expansive, full-service bar, surrounded by metal stools, is the spot’s watering hole for those who opt for libations. There is even an attractive six-beer tap set on the counter for brew drinkers. Asked if international craft brews would be featured, Tashkale replied without being specific that they would be constantly changing. As usual; it is really hard to track this guy down, probably because he is always working on new ideas, not yet final in his mind. The answer is the same with wines, although he does favor French wines.

As for the spirits, he does not skimp on quality. All bottles are top shelf, like Maker’s Mark and Knob Creek. In the cordial department, a long and willowy pale green bottle holds melon-flavored Midori (Japanese for green). Grand Marnier, always a favorite, is also front-and-center.

Flame’s initial menu offered only a listing of artisan-flatbread pizzas. They’re made in an oven especially created for the restaurant. The oven makes an impressive statement, located within the spacious, open kitchen area.

Today, a delicious array of items has been collected in a brand-new menu that follows the mission of Flame: “Here is a simple yet eclectic menu that originates from the familiar, the foreign and the ever-evolving tastes from around the world.” 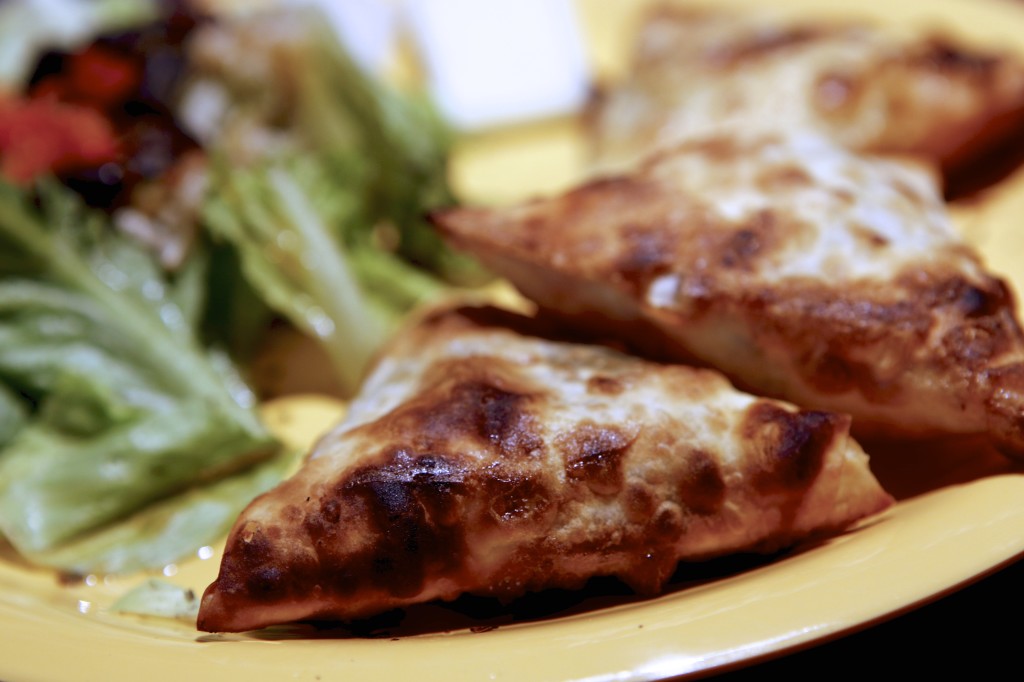 Tashkale, who is Turkish, has followed the Ottoman Empire’s bridge between Far Eastern and Mediterranean cuisine. The authenticity of items on the menu is underscored by the presence of chef Birsen Duran, a native of Turkey, who is researching the rich culinary culture of the Ottoman Empire. Her English is halting, but her cooking speaks volumes.

The menu has expanded from three pizza offerings to a total of six, plus grill items, tapas, salads, soups and dessert. The pizzas remain popular choices for those who are looking for a satisfying snack or who want to sample the pizzas paired with some of the other new dishes.

The Flame pizza has hints of Middle Eastern roots, with its combination of ground lamb and beef, parsley, onion and tomatoes. Alsace pizza mixes Canadian bacon, onion, crème fraiche and cottage cheese for a French twist. The Barcelona and Athena pizzas have roots in Spain and Greece. The Brooklyn layers fresh mozzarella cheese topped with tomato sauce and needs no explanation. The latest pizza offering is the Taipei, a combination of garlic, basil and spices. The crust is very pliable, a little like lavash. Tashkale instructs pizza eaters to roll the cut pieces into a cone to hold the ingredients while taking a bite. Price is $11 each, and it comes with a side salad.

Under the grill heading are the Flame burger, which uses the same ingredients as in the Flame pizza, and grilled chicken. Tashkale first marinates a chicken breast and places it in a cast-iron pan. “I don’t add any oil, because the chicken creates its own juice to keep it moist,” he explained.

The small print states that each grilled item comes with salad and soup. Two salads are on the menu, and the daily soup may be the chef’s choice, which Tashkale may cull from his long list, including lentil and pea. 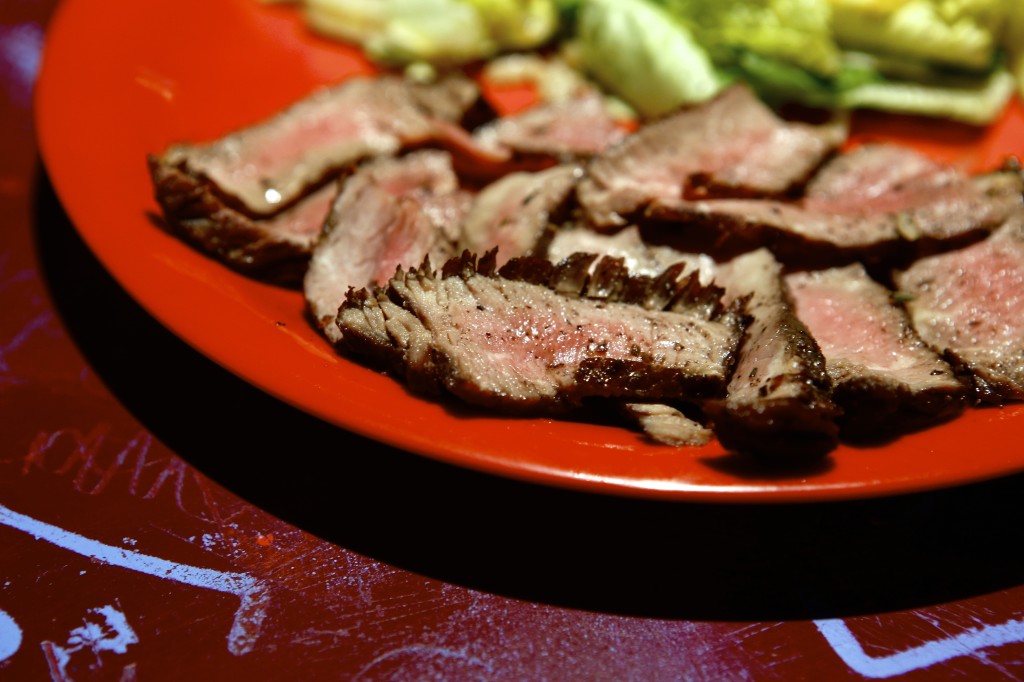 One may choose any combination of dishes under the tapas (or mezze) listing, which are beef, shrimp, chicken or hummus items, accompanied by salad. One item that is making an appearance is Tash’s own salmon. “I cure it in the regular method, adding my own, additional list of ingredients over the top of the salmon,” he said.

If you come for brunch on Saturdays or Sundays, 11 a.m. to 2 p.m., Tash may very well add items not on the menu, just for fun.

In addition to the food and artistic surroundings, you just might be rubbing elbows with an engaging group of fellow diners. Steve Kern, executive director of the Everson Museum of Art, brought a group from Lebanon. Bill Delavan, owner of the Delavan Center, had a pizza the first day Flame opened. Symphoria managing director Catherine Underhill, along with members of Symphoria, which has offices nearby, occasionally stop in, as well.

People trickle in all day long, which is fine with Tashkale. He likes to schmooze with everyone, explain his art on the premises and discuss anything else that comes up in conversation.

This is not the chef-owner’s first foray in the restaurant and art gallery business. He owned and operated Café Agora, at 110 Harvard Place, justoff Westcott Street, now occupied by Recess Coffee.