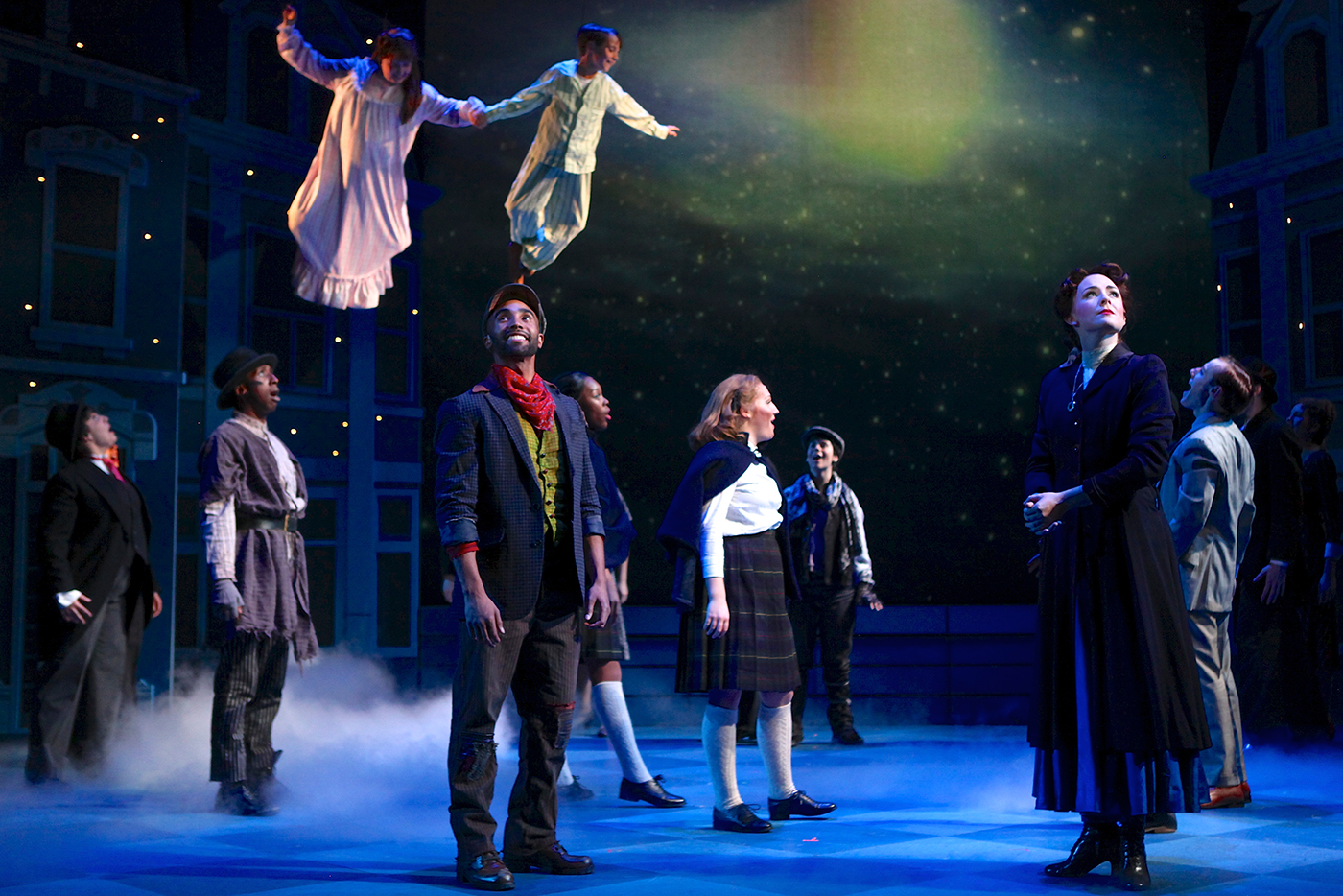 Up, Up and Away

In the 17 years since the launch of the joint Syracuse Stage and Syracuse University Drama Department holiday venture, there has never been a lollapalooza production number like the exuberant show-smashing “Step in Time” in the current manifestation of Mary Poppins, running through Jan. 8.

Led by the Cockney street artist Bert (played by Jonathan Burke) and choreographed by Anthony Salatino, the Richard and Robert Sherman number served goofy Dick Van Dyke well in the 1964 Walt Disney movie. But the song’s expansion and new placement in Julian Fellowes’ 2004 book for the Broadway musical, co-created by Cameron Mackintosh (Cats, Les Miserables), highlight the differences between the screen and stage.

Yes, it’s the same Julian Fellowes who wrote Downton Abbey. So in this version we get more class consciousness. In the new “Step in Time,” Bert and other street people, like dirty-faced chimney sweeps, all pals of the magical nanny Mary Poppins, are there to support the Banks children as they face being thrown out by heartless bankers.

Fellowes also pens more streamlined dialogue than we heard in the film and cuts the treacle. Comedy is not his usual forte, however, and if this mounting generates more laughter than you have heard in other productions, credit antic-fingered director Peter Amster.

The 2013 movie Saving Mr. Banks noted that querulous, left-wing theosophist P.L. Travers, who wrote the Mary Poppins children’s series, was unhappy with what arch-commercialist Walt Disney was doing with her property. She thought her work was filled with profundity, but Walt won the day by producing an entertainment of lasting interest and making Travers a wealthy, if not silent, woman.

Part of what makes the current Syracuse Stage production so compelling is that it appears to grasp all the discordant energies fused into the show but still wants you to have a good time. Fun, yes, but it seems to imply more than it says.

In contrast to Disney policy, the Banks children, Jane (Sofia Benderski, age 12) and Michael (Rueby Holsopple, age 10), are a bit naughtier than in the film, while the parents, George Banks (Benjamin Howes), and Winifred (Kelly McCormick), don’t seem fully in charge. Not that the parents are short-changed; both have self-dramatizing solos, “A Man Has Dreams” and “Being Mrs. Banks,” respectively. 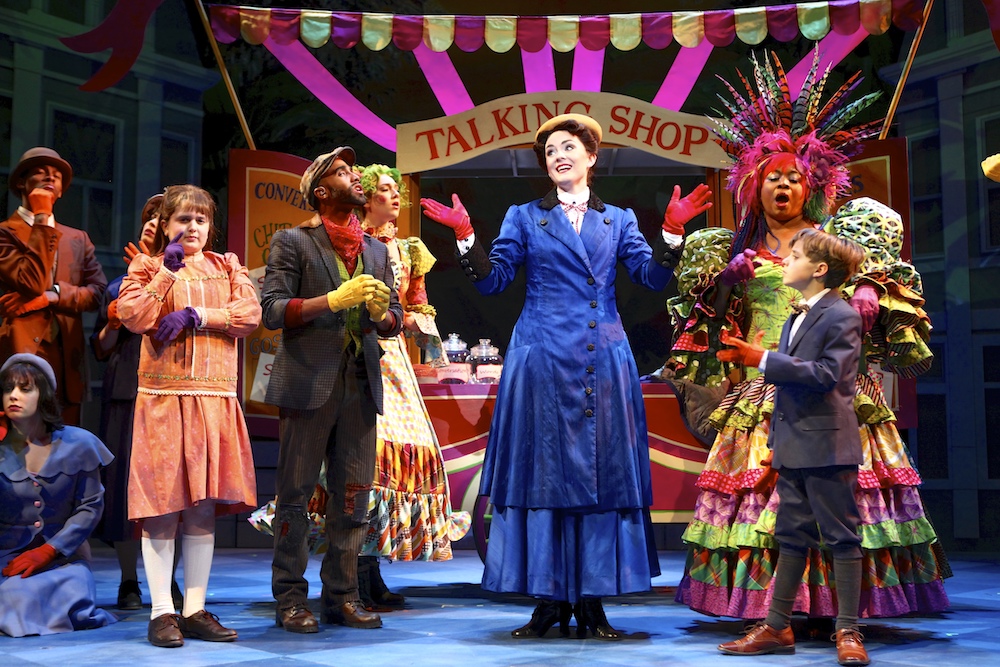 The focus on the children, however, puts a heavy burden on director Amster and two sets of pre-teen shoulders. Both youngsters have tons of lines. Usually with youthful performers a company will cast A and B teams so as not to wear out the kids. It appears with so much at stake, no one wanted to rely on a runner-up. There are scenes where Master Holsopple’s larynx and superlative diction define the action.

Not that anyone can upstage the title character. The nanny might be a moral rather than a romantic figure, but here we have drop-dead-gorgeous Emily Brockway casting her magic. Brockway is a soprano with much expression in upper ranges and arresting articulation. She’s as ready for operetta as she is for Broadway.

Her presence backs up Mary Poppins’ boast in her opening number, “Practically Perfect,” with four syllables, “prac-ti-CAL-ly.” Brockway is also younger than Marys in other productions, an advantage when she joins ranks with the dancing chorus composed of SU Drama students. Brockway just qualified for her Equity card with this production, but her professional gloss is conspicuous.

The Fellowes-Mackintosh revamping also reconfigures the conception of Bert the chimney sweep. What audiences loved in the film cannot be left behind, and we get his big production number “Chim Chim Cher-ee.” Actor Jonathan Burke and director Amster make this Bert less talkative but more knowing.

He’s also more daring. In what will be Mary Poppins’ most talked-about scene, Bert in tap shoes dances up a platform on the proscenium. OK, we can see the wire. He keeps hoofing at the top of the proscenium, when blood is surely rushing toward the head of his inverted body. This motif might have originated with Fred Astaire, who did it all with the camera in successive takes in the 1951 MGM movie Royal Wedding. Burke’s Bert is about 30 feet above the stage. 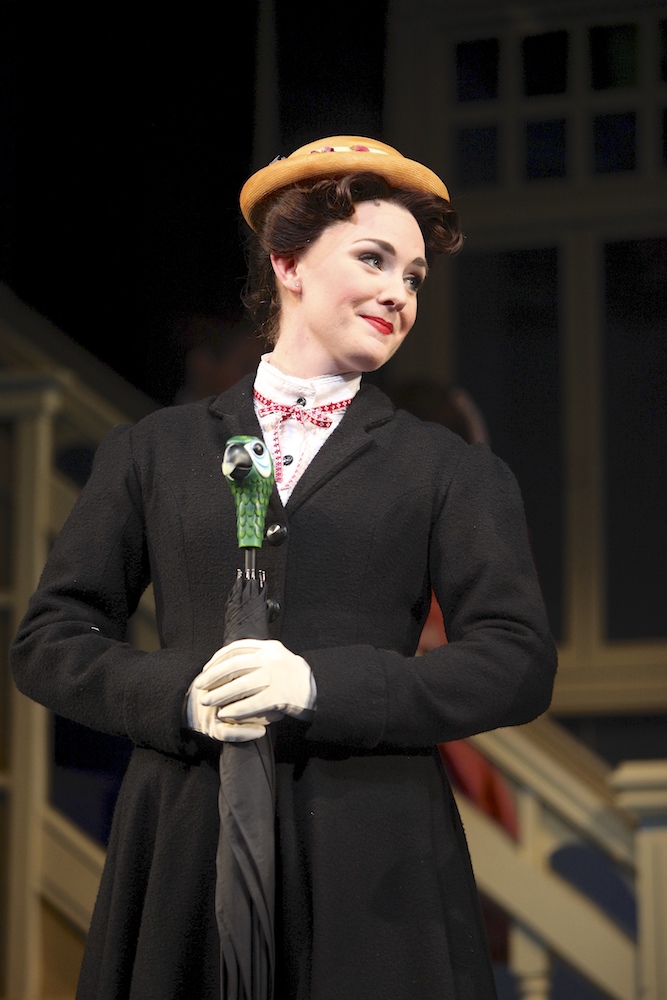 Mary Poppins would never be classed as a mega-musical, even with Brian Cimmet’s full-throated music direction and 30 players on stage, most of them taking multiple roles, but as a rule most musical numbers are bigger when taken off screen. One of the best remembered of all Disney songs, “Supercalifragilisticexpialadocious,” was originally presented modestly in the park. Here it is moved to the sweet shop run by bombastic Mrs. Corry (Joilet F. Harris) and turns into a production number swallowing up most of the cast. With everyone miming the shape of each letter it feels like a Sesame Street routine expanded to fit the half-time slot of the Super Bowl.

Honoring the significance of co-productions with SU Drama, some of the most impressive supporting roles are contributed by faculty members and students. The first to catch our eye is the loose-limbed scene-stealing Cheech Manohar, whose choreographed clumsiness upends a china cabinet and breaks a table, all on cue. He’s supposed to be helping the take-charge Mrs. Brill (Marie Kemp), whose arthritic body set all but obscures a familiar persona. A few scenes later Kemp is once again unrecognizable, except in voice, as the aged Bird Woman in “Feed the Birds,” on the theme of charity.

Even more striking transformations are wrought by Celia Madeoy, who first appears, stiff as marble, as the Queen Victoria statue in the park. In that role acting means never quivering a nostril. A quick scene change and she’s busybody red-headed Miss Lark, carrying the fluffy white-haired dog (a state-of-the-art hand puppet).

In the second act Madeoy dominates the stage as Miss Andrew, a black-browed nanny from hell, recently returned from Devil’s Island. She’s the incarnation of a cluster of witches dredged from childish sleep-terrors. Her solo is “Brimstone and Treacle,” a sulphurous counterpoint to the rest of the score. In between, Madeoy is also the show’s dialect coach.

Devon Painter’s costume design makes David Lowenstein as the Bank Chairman look like the capitalist on the Monopoly board game; few will remember that he was a warbling Edna Turnblad two years ago in Hairspray. His comic timing is still serving him well as Lowenstein gets the maximum out of a plot-turning piece of good news.

As the star of the recent SU Drama production Nine, Ezekial Edmonds is always easy to pick out in a crowd, such as the clown-suited Valentine popping out of a toy box. He also opens George Banks’ heart when, as scruffy working stiff Northbrook, he hits up the father for a risky if worthy loan.

The holiday co-production can be counted on to do the best business of any show all year. Robust ticket sales have already called for extra performances. We don’t measure quality with dollar signs, but Mary Poppins looks like one of the poshest productions ever. It’s not just those supporting players who look different every time they change a shirt, all 30 players (except red-coated Mary) have new costumes by Devon Painter in virtually every scene.

Linda Buchanan’s scenic design, augmented by Thomas C. Hase’s lighting and Kate Freer’s projection designs, give you more to look at than the eye can follow, even more as Amster is driving the action at a furious pace, shadows are moving behind translucent scrims, and Mary flies up to the moon. This is why Syracuse Stage, the house that Arthur Storch built, is the most robust cultural citadel in town.