After making our presentation of the “Nationwide UFO Magnitude Study” at the 2016 Mutual UFO Network Symposium, we demonstrated that we could drill down into the data for a specific day during the sample years of the study (2001-2015). Our presented example of this ability was the Fourth of July sighting charts published on this blog in July. During the presentation’s question-and-answer period, we were asked if we’d done a specific day table for Sept. 11, 2001, which we hadn’t. Interestingly, a fair number of people in the audience expressed a desire to see this data. So here is the New York State chart showing the counties and tallies for UFOs on 9/11. 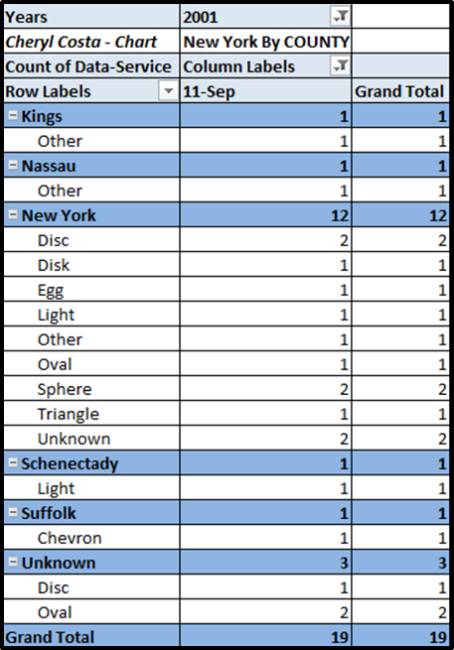 On 9/11, only five counties had sighting reports in the both the MUFON and NUFORC databases. Sixteen UFO sightings were assigned to specific counties, and three had no city reported, therefore there wasn’t any county information. Of the 16 county UFO reports, 12 were assigned to Manhattan.

As an analyst, I must caution readers that an unusual amount of daily UFO sighting reports must be weighed in the context of the emotion and panic of 9/11; something government UFO researchers and debunkers used to call “war nerves.” The other thing that must be clearly pointed out from an analysis view point is correlation does not equal causation.

As a UFO researcher, I point out another unique window of time associated with 9/11: after the attacks. The United States air space was shut down for three days. Nobody was flying on September 12, 13, and 14, 2001. 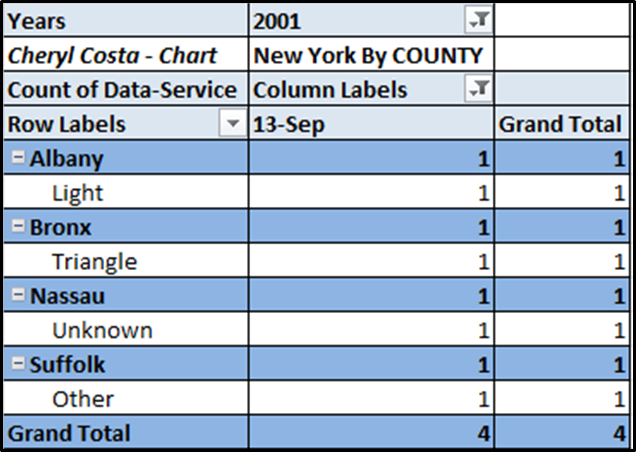 The question arises: Were there UFO sighting reports in the rest of the United States during the post 9/11 air space shut down? At present, I don’t know, but I promise to get back to you in the near future after I compile the numbers, because to be honest with you, I’m intrigued at what I might find.

Let’s take a look at some recent UFO sightings in New York skies:

Sept. 6, 2016: At 8:50 p.m., a resident of Albany reported seeing a triangular craft slowly flying over his neighborhood for about 10 minutes.

Sept. 6, 2016: At 10 p.m., a resident of Kingston observed a multi-colored cluster of bright lights flying in the western sky.

Sept. 7, 2016: At 8 p.m., a resident of Syracuse reported five orange, square-shaped objects flying at low altitude in the northern sky.