For some time now I’ve had plenty of emails asking me to write about UFO sighting trends in other states. Since I’ve been compiling a book about nationwide sighting trends, I figured it was about time to start sharing. I was also recently invited to be a speaker at the MUFON Erie UFO Conference in April of 2017 in Erie, Pennsylvania. By that reckoning, I thought it might be nice to start my out-of-state UFO trend sharing with our neighbors to the south — the Keystone State of Pennsylvania.

Pennsylvania is a heavy hitter in terms of UFO sightings, ranking in the top 10 States. On average, the state ranks sixth following New York. 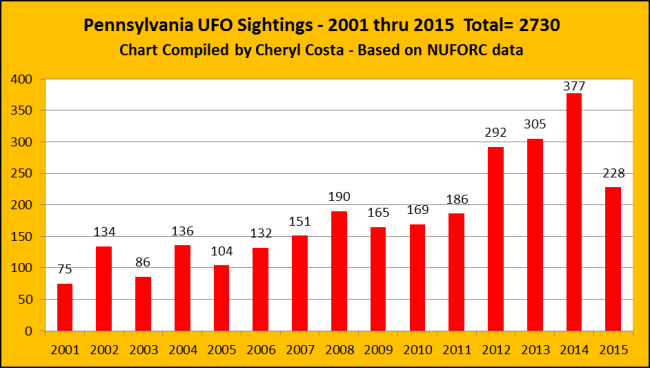 In the past 15 years, Pennsylvania followed a typical trend of oscillating totals from 2001 to 2007. Where the state differs from many of the top ten states is when its upward trend began to shapely rise. Most states start to rise in 2008 and ramp upwards, PA remained roughly flat in the years 2008 to 2011. In 2012 the state’s sighting numbers spike upward consistent with many of the Top Ten states. For the years 2012 to 2014 the state maintains it upward trend and falls off in 2015 like many states.

Why the fall off in UFO sightings? Nobody knows! 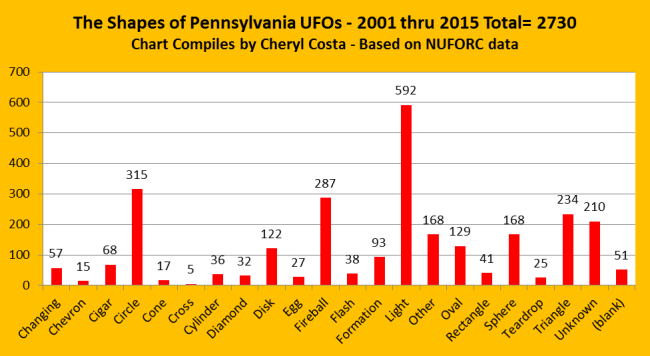 In terms of the types of shapes UFOs come in, that Pennsylvanians reports the trend pattern is consistent with most other top 10 States. The numbers might be different, but the peaks and valleys are stable by comparison.

One interesting fact that I learned at the 2014 MUFON Erie UFO Conference was that “Big Foot” sightings correlated with an intense cluster of UFO sightings back in October 2013. I know there are a lot of debunkers and UFO purists who don’t want to hear about Big Foot and UFOs, yet the presentation I heard presented some pretty strong evidence. Obviously, much more research needs to be done in that area of inquiry.

Lastly, I must mention MUFON Erie UFO Conference is a first class all-day conference held in the lovely Erie Bayfront Convention Center. These events have grown in popularity and are well attended. As New York State doesn’t host a UFO conference, the Erie event has regularly attracted a great number of central and western New Yorkers.

If you have never been to a real UFO conference, I strongly encourage those in driving range of Erie, Pennsylvania, to attend this terrific event. I assure you that you won’t be disappointed.

Let’s look at some recent sightings in the New York skies:

April 15, 2016: At 11:30 p.m., a Long Island resident reported an irregular grouping of bright lights flying in the southern sky.

April 17, 2016: At midnight, a resident of Broadalbin reported seeing a bright object moving at high speed.

April 19, 2016: At 10 p.m., a resident of Buffalo using a telescope witnessed a circular object flying at high altitude.

Fresh Music Friday: Vaud & the Villains
The Best Political Satire of Election 2016 (so far)
To Top