So what did we learn after a wild sports weekend at the Carrier Dome?

For starters, it appears the Syracuse University basketball team still has a long way to go to regain its usual place among the top 25. And the Orange football team might not have as far to go as we thought to be competitive in the Atlantic Coast Conference.

No, the coach who felt he had to tell everyone to “back off from the ledge” was the coach of a football team that will likely compete for the national championship.

After the SU basketball squad outlasted Lehigh 57-47 in its season opener on Friday, Nov. 13, the only reasonable question entering the football game between Clemson and the Orange on Saturday, Nov. 14, was whether the No. 1 Tigers would score more points than Lehigh.

But a funny thing happened on the way to a Clemson rout that might have pushed embattled SU coach Scott Shafer all the way out the door. The Orange fell behind 14-0 after two minutes and 31-17 at halftime, but hung in there and put a scare into the Tigers before falling 37-27 before 36,736 fans at the Dome.

By failing to dominate an SU team that has lost seven consecutive games and counts Wake Forest as its most impressive win, Clemson lost its stranglehold on the No. 1 spot in the College Football Playoff rankings. That’s why Tigers coach Dabo Swinney felt the need to defend his team, even though it’s likely Clemson will win the rest of its games and be one of the four teams in the playoffs.

No one wanted to talk about moral victories on the Syracuse side, but that’s exactly what it was for a team that had fallen apart after its first 3-0 start since 1991. With starting quarterback Eric Dungey out because of a head injury suffered in the Nov. 7 41-17 loss at Louisville, the Orange turned again to Mahoney, a junior college transfer who has now made two college starts — against then-No. 8 LSU and No. 1 Clemson. Despite fumbling on SU’s first play from scrimmage (leading to the 14-0 deficit after two minutes), Mahoney pulled it together and the Orange outscored Clemson 27-23 in the final 58 minutes.

When new athletic director Mark Coyle is assessing Shafer after this season, he will have to take into account two things: The Orange never quits, and perhaps no team in the country could survive the injuries at quarterback that SU has sustained the last two years.

“It’s been a difficult couple of seasons here with playing seven or eight different starters at quarterback in two seasons,” said Shafer, whose squad is now 6-16 the past two seasons. “If you would have told me 20 years ago when I got into coaching that ‘Hey, there’s going to be a couple seasons where you’re going to have to play eight different quarterbacks,’ I’d say, ‘What are you talking about?’ But that’s life, and I think it’s a great opportunity for us to teach these kids how to endure and push through hard times.”

Hard times are relative, of course, and Shafer would love to have the “hard times” that are facing the SU basketball team. Against Lehigh, a very good team that’s favored to win the Patriot League, the Orange committed 17 turnovers and were disturbingly ineffective down low as they scored only 10 points in the paint and outrebounded the smaller Mountain Hawks by just two, 40-38. 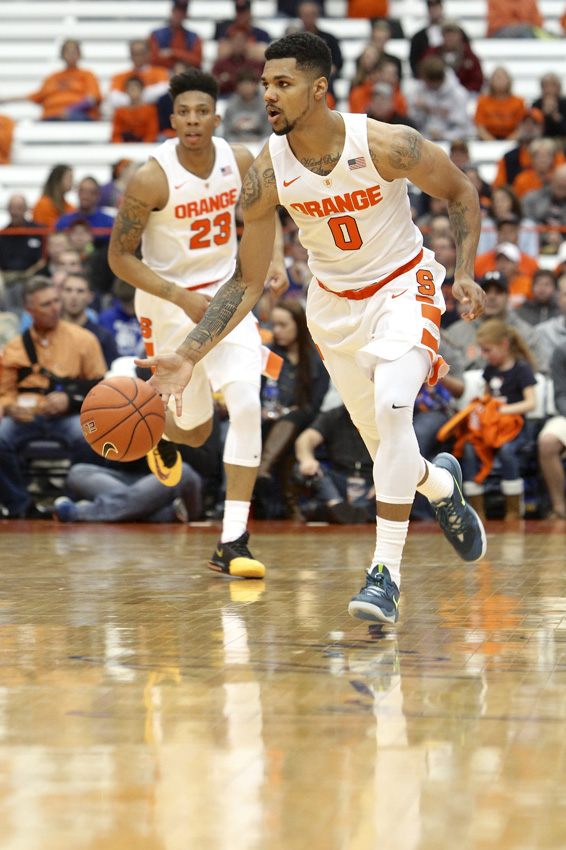 SU is a guard-oriented perimeter team this season, and the offense sputtered with guards Michael Gbinije and Trevor Cooney combining to hit only 5 of 18 from 3-point range. Fortunately for SU, the defense was stellar in the first half (contributing to Lehigh’s 16-minute stretch without a basket), and sophomore guard Kaleb Joseph, freshman forward Tyler Lydon and junior center Chinonso Obokoh provided solid minutes off the bench.

“We made too many turnovers and we missed a lot of 3s,” Orange coach Jim Boeheim said. “We took 20 (3-pointers) in the first half again and that’s probably too many. We did not do a very good job on offense. When we were patient, we ended up turning it over and making some bad turnovers.”

Unlike the football team, which has only two games remaining (at North Carolina State on Saturday, Nov. 21, and at home vs. Boston College Nov. 28), the basketball team has an entire season ahead of it to get better and work its way into the NCAA Tournament.

“We got it out of the way,” Gbinije said. “It’s only the first game; we have a lot to improve on. The good thing is that we came out with the win so hopefully we can keep this going.”