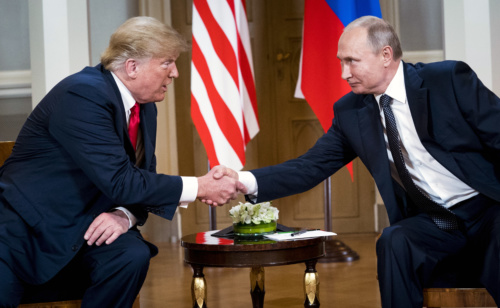 Widespread criticism and confusion spread throughout the U.S. – and the world – Monday evening after President Donald Trump met with Russian leader Vladimir Putin during the Helsinki Summit in Finland.

The summit came days after the deputy attorney general publicly indicted 12 Russian military intelligence officers for hacking the Democratic National Committee, the Clinton presidential campaign and the Democratic Congressional Campaign Committee, according to The New York Times. The agents are accused of monitoring hundreds of employees, implanting malware on systems and stealing and leaking documents all around April 2016.

During the Helsinki meeting, Trump took Putin’s side on the issue: “My people came to me, [Director of National Intelligence] Dan Coats came to me and some others saying they think it’s Russia. I have President Putin, he just said it’s not Russia,” Trump said. “I will say this, I don’t see any reason why it would be.”

Though Trump said he had confidence in U.S. intelligence agencies, he noted that Putin was “strong and powerful in his denial” of any Russian involvement, Politico reported.

The response sparked an international backlash from both sides of the aisle, The Guardian and BBC showed. While former CIA Director John Brennan took the discourse one step further by calling it “nothing short of treasonous,” experts told Business Insider it could be too early in the investigation to say real treason occurred – although they did say it seemed suspicious and could lend more tinder for the ongoing investigation.

On Tuesday, about a day later, Trump said he misspoke – that he meant “wouldn’t be,” reported Reuters. It is unclear if this has quelled any of the sentiments.

Did you agree with how the summit was handled? Let us know in this week’s poll.

Here are the results of last week’s poll, which asked if readers were excited about the Hailey Baldwin x Justin Bieber engagement: