A breakdown of the best Internet music apps that are available.

With so many applications for mobile phones and computers these days, it’s easy to lose track of what’s out there, let alone which apps contain the best quality. Here you will find the top five internet music apps on the market and what makes them stand out from their competitors.

There are things that one must look at when choosing which application to invest time and money in. These include user interface, song library, audio quality, features, compatibility and how much it costs. That being said, let’s begin the list with a count down from number five:

Pandora internet radio is by far the weakest competitor to the rest of the choices in this list. Numbers don’t lie, however, and Pandora boasts over 250 million general users, which crushes Spotify’s 40 million. This may sound like a lot, although only north of 3 million of those users are paying members, while Spotify possesses over 10 million paid subscribers. The reason Pandora doesn’t have a solid paid subscriber to free subscriber ratio is simply because Pandora One (the paid version of Pandora), doesn’t offer very much as opposed to the free version. For $4.99 a month, users get no ads, more skips per day and less pauses (fewer time outs). The price is one of the cheaper options available, but you’re really getting what you pay for with this bargain. 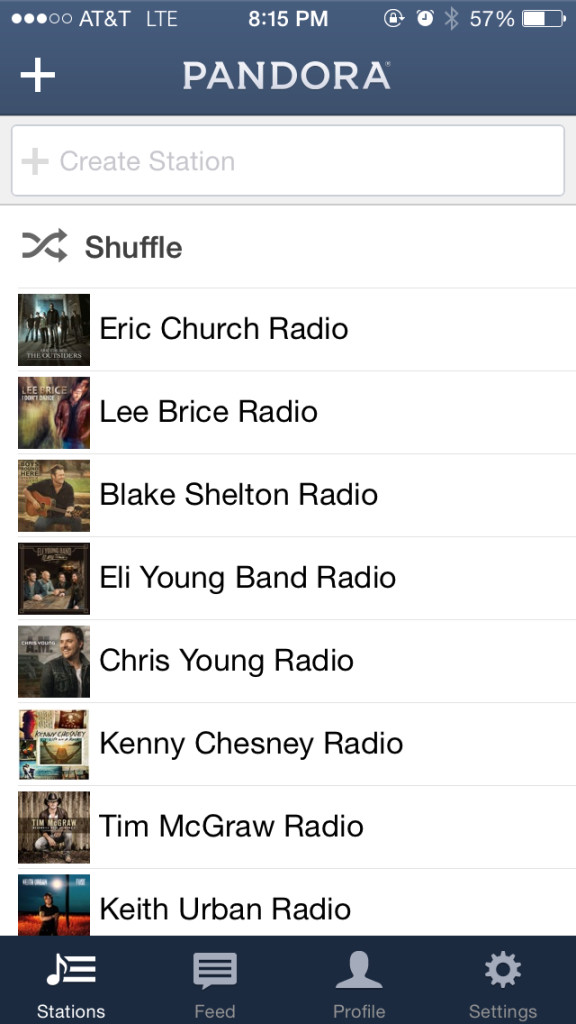 Pandora features custom playlists that are very intuitive and easy to use.

One area where Pandora excels is in the user interface department. Creating stations is the primary feature on the free version of Pandora and they do it well. The content within the stations are true to the artist or song that the user chooses, although there is a significant amount of ads present and it is rare to go a few songs without hearing from advertisers. Pandora’s song library is also not one to drool over either, containing just over 1 million songs. What make Pandora one of the more attractive options, however, is the compatibility aspect. Pandora is available on Apple mobile products, Windows phone, Blackberry, Android devices, Kindle Fire, Nook, Mac and PC, smart TV’s, streaming players, blu ray players and many more. Pandora even comes standard in some automobiles such as Honda, Chevrolet and Toyota, among others. Click here to see the full list of compatible vehicles, and here for a list of compatible in-home devices. 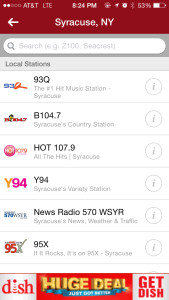 Next on our list comes the iHeartRadio app. iHeartRadio’s 40 million users enjoy a free music experience with a catalog of over 18 million songs and far less ads than the free version of Pandora. iHeartRadio is the most unique app in this selection because it allows users to listen to content from radio stations locally and across the country. The app uses the phone’s location service to determine where the user is and uses that data to come up with local radio stations. In addition to this feature, users have the ability to listen to talk shows, television and radio, from around the country in little snippets so as to not give away too much free content. iHeartRadio is readily available on a number of devices including Apple products, Android devices, Windows devices, the Blackberry 10, streaming devices and a number of vehicles.  To see the full list of compatible machines, click here. The user interface is also very easy to use and has a very small learning curve making this app a must have for those who are avid radio listeners.

Below is an info graphic displaying audio quality and library size of the applications: 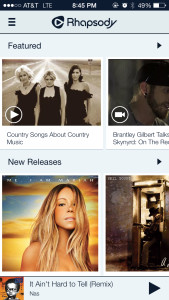 Rhapsody’s home page on its mobile app, displaying featured music and new releases along with what is currently playing at the bottom.

Coming in at number three is Rhapsody. Rhapsody begins the list of applications that allow users to pay a certain amount of money per month (in Rhapsody’s case, $9.99 a month) in order to have the ability to download songs that are available to them when the user is offline. Rhapsody enjoys the largest library out of all of the options in this list (over 32 million songs, which is updated every Tuesday with new music) due to its acquisition of Napster at the beginning of 2012. This gave Rhapsody access to Napster’s library of songs as well as their subscribers.  The user interface on Rhapsody’s mobile app is well put together, however, is a bit more involved than it’s competitors seen earlier in this list and requires a bit of a learning curve due to its extra features. There is no free version of this application, only a 30 day trial that can only be used once, making this one of the few disadvantages to Rhapsody. Compatibility for the Rhapsody application is average compared to its competitors.  The only vehicle that it is available to sync with without using any cables is Ford, along with only being compatible with a small number of smart TV’s including Vizio, LG and more.  See the full list of compatible devices for Rhapsody here. 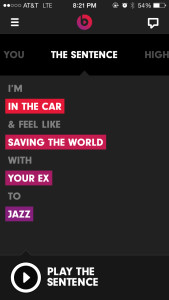 “The sentence” feature in Beats Music.

Beats Music comes in as a close second to Spotify in this list. The allure of this application cannot be denied, it is absolutely beautiful.  It is clear, however, that the design is meant to appeal to a younger demographic and may not be for everyone. The user interface is intuitive and fun to use, showcasing a modern design to match to Beats by Dre brand. The features that make up the app are fresh and take a fun spin on finding new music. “The sentence” is an exclusive feature to Beats Music, playing music for whatever the user is in the mood for by creating a sentence comprised of four categories (see photo to the right). This feature adds a comedic value to the app while being able to have fun finding new music. Beats Music consists of over 20 million songs, which is updated every Tuesday, similar to Rhapsody, with over 30 genres to select from in the “find it” option.  Another unique feature that the app offers is profiles to famous musicians, similar to Twitter in that the usernames begin with an “@” symbol. These profiles contain a bio about the artist, latest releases, top songs, the ability to follow them and a “beats playlist” of their best work.  The profiles are organized by Beats Music moderators and not the musicians themselves, however. The cost of this service after the 14 day free trial is $9.99 a month and is free for the first 30 days, or, for AT&T users, it is $14.99 a month for a family of five while being free for the first 90 days. The compatibility of Beats Music is its only downfall, as it has a limited selection of suited devices, being a relatively new application.  Currently, the apps serves users with Apple products from the past few years (i.e. iPad third generation, iPhone 4, etc.), Android devices running OS 4.03 or higher, Windows Phone 8 or higher, Sonos wireless speakers, and the latest versions of Google Chrome, Internet Explorer, Firefox and Safari. 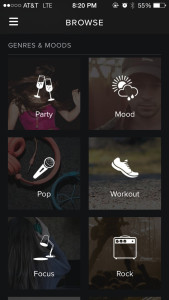 Although there is a lot to like about Beats Music, Spotify ran away with the title of best Internet music app because of its ability to stream music without being forced to pay a monthly fee after the free trial is complete. Users of the app can stream full albums on shuffle for free at any time with a set number of skips given, on top of being able to create their own stations, similar to Pandora and iHeartRadio. Like Beats Music, Spotify offers a premium version of their service for $9.99 a month, which gives users the ability to download an unlimited amount of music for the user’s offline listening pleasure. There is also a $4.99 unlimited option that is limited to desktops and laptops in addition to not being able to download songs. Spotify features a 20 million song catalog, which is updated every Tuesday when new music typically comes out, the same goes for Beats Music and Rhapsody. Compatibility isn’t Spotify’s sting suit, however, making this its only downfall. Like the rest of its counterparts, Spotify is available on Mac and Windows computers, Apple mobile products, Android devices, Windows Phone 8, as well as a number of Blackberry devices. Lastly, the user interface is just as good, if not better than Beats Music while maintaining a more mature look.  There is a bit of a learning curve, but this won’t be too much of a hassle and isn’t a make or break feature for the app. Uncovering new music is made very easy with the “Discover” tab, which shows what music is trending in the user’s area and what is popular in general on Spotify.  The “Browse” tab features a “Genre and Moods” category which is broken up into different subcategories so the user can listen to the type of music they are in the mood for at that moment, similar to Beats Music’s “The Sentence.”

There are many more quality internet music applications on the market than what is just on this list. That being said, a few honorable mentions include Slacker, Rdio and iTunes Radio. Slacker claims to have 10 times the amount of music than Pandora, with playlists that Spotify “can’t touch.” Like Spotify, there is a free streaming alternative with ads and limited skips, along with two different payment options if the user elects to go that route. There is a $3.99 radio plus option, which gives the user unlimited skips with no ads, as well as a $9.99 premium package with the same features as the previous option on top of being able to listen offline and having unlimited access to their library.  Rdio is another free internet music app with the choice of paying $9.99 for an ad-free listening experience of their 25 million song catalog. Lastly, there is iTunes Radio, which failed to make the list simply for the fact that it is only on Apple products and nothing else, along with not having many features and not having an alternative payment option available.

Listen to the Music
Tech it Out
To Top