It’s been a thrilling February, but will the Orange be good enough come March?

With a school-record 25 consecutive wins, the No. 1 ranking in the country and three of the most dramatic wins you’ll ever see in a recent two-week span, the Syracuse University men’s basketball team is on a roll unlike any other in the program’s 114-year history.

But as far as head coach Jim Boeheim is concerned, the Orange hasn’t done anything yet. And in many ways the Hall of Fame coach is right on, as usual.

Over the next two and a half weeks, the Orange will face the most difficult part of its schedule, with road games against No. 8 Duke, Maryland, No. 17 Virginia, and Florida State among its final six regular-season games. And then SU will play in its first Atlantic Coast Conference Tournament, followed by the only season that really matters – the NCAA Tournament.

So while SU fans are dreaming of a perfect season, Boeheim is focused on making improvements because as crazy as this might sound, the Orange will have to play better to have a strong finish and make a deep run in the NCAA Tournament. The final leg of the season starts at 7 p.m. Wednesday, when the Orange hosts Boston College at the Carrier Dome in the second-to-last home game of the season. 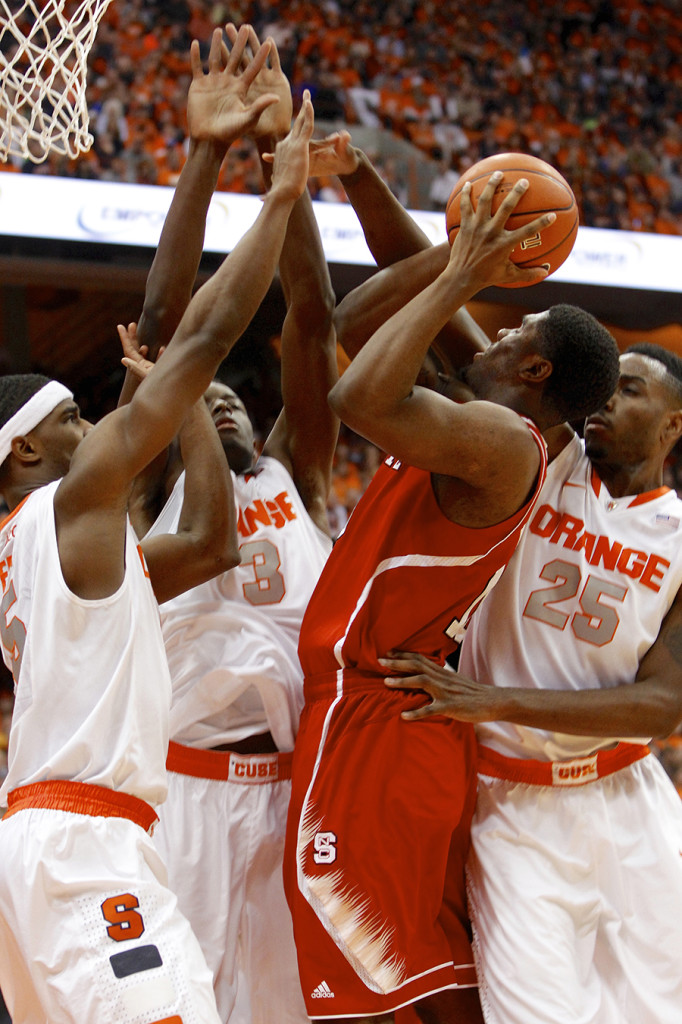 “I think we have to look at the facts, which is we have the toughest part of our schedule ahead,” Boeheim said after the Orange survived against North Carolina State this past Saturday at the Carrier Dome. “You don’t get any trophies that matter in the regular season. The only thing that matters is what you do at the end of the year, the real end of the year. If we can use these next six games to get better, play better basketball, I think that will be helpful.”

Lost in the last-second drama of the recent Pittsburgh and North Carolina State games is that SU’s offense has been sluggish since the Orange’s thrilling 91-89 overtime win against Duke Feb. 1 at the Dome. SU’s defense has remained solid thanks to the stellar play of center Rakeem Christmas, who should get help soon when back-up center Baye Moussa Keita returns from a knee injury.

Against Pitt Feb. 12, the Orange shot just 38 percent from the floor and 56 percent from the foul line, but was bailed out by C.J. Fair’s clutch jumpers in the closing minutes and Tyler Ennis’ desperation 3-pointer at the buzzer that gave SU an improbable 58-56 win.

Against N.C. State, the Orange shot 35 percent from floor as Fair, the team’s leading scorer, made only five of 16 attempts. But the defense forced two late Wolfpack turnovers and a goaltending call on Fair’s sure layup in the closing seconds lifted SU to a 56-55 triumph.

“We need to be better offensively if we want to have a great ending,” Boeheim said. “We’ve played the easiest games of our schedule. The next six games will be much harder, particularly the four out of five road games we have at the end of the year.”

Boeheim said the Orange offense is at its best when freshman point guard Ennis and sophomore shooting guard Trevor Cooney are scoring. But against N.C. State, Cooney shot 3-for-10 (2-of-6 from 3-point range), while Ennis also shot 3-for-10 with five assists and four turnovers, which tied a season high.

When Ennis was whistled for a charge with 14.9 seconds remaining against the Wolfpack and SU trailing 55-54, it was his first turnover in the last minute of a game this season.

“Down the stretch we weren’t good and you go down the stretch with too many games like we have had, you’re going to have some of those games where you don’t make good plays,” Boeheim said. “(Saturday) was that game and we were able to make a couple of good (defensive) plays finally toward the end there and one big (defensive) play at the end.”

That big defensive play – a Cooney and Jerami Grant trap that led to a Christmas steal that led to Fair’s game-winner – was the latest example of why this team has been able to overcome its off nights.

“We kept fighting,” Fair said. “We got a couple of key turnovers that we needed for us to win the game. It’s not the ideal win, but we’ll take it.” 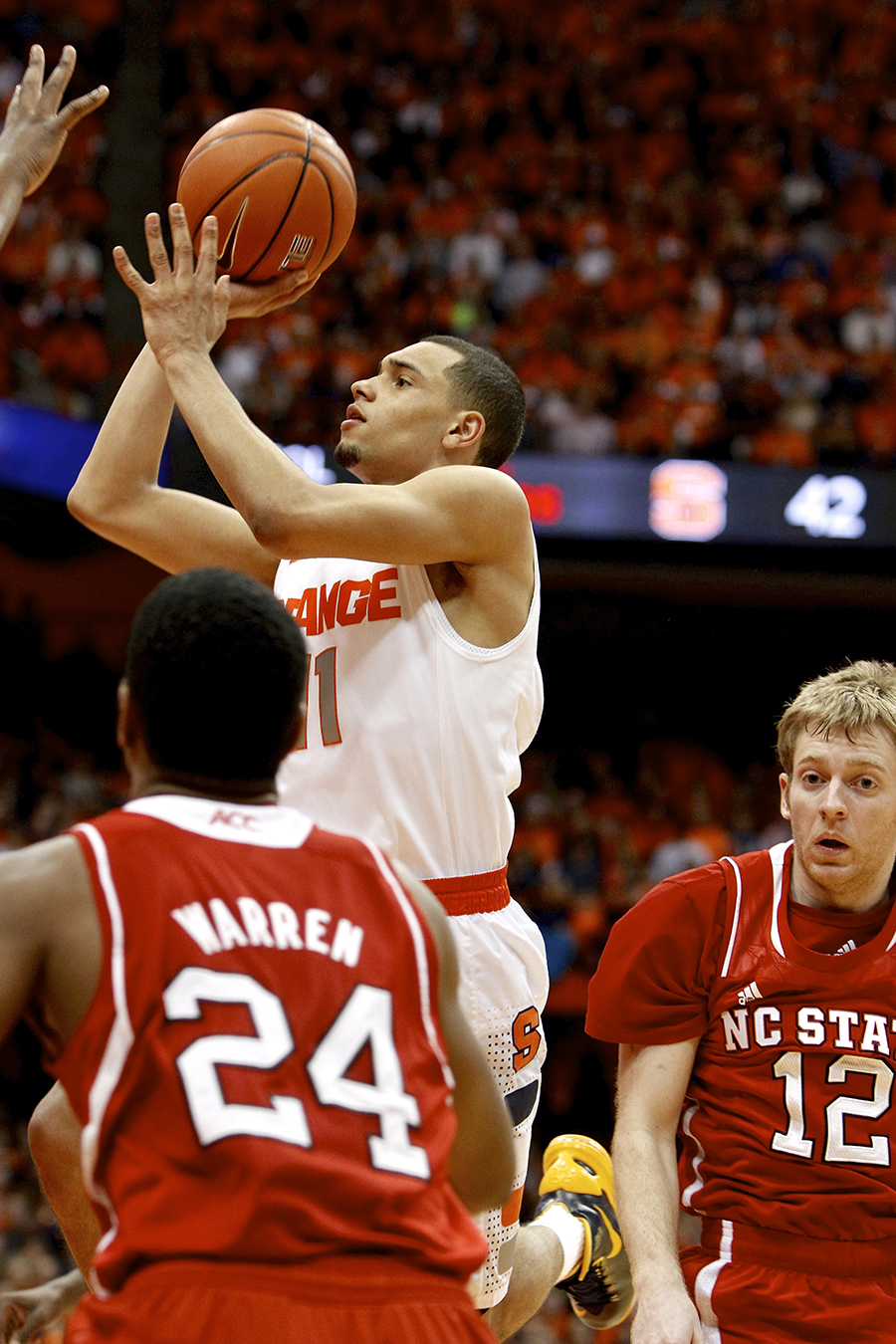 The Orange players know they are a few plays away from having lost two or three games in the last few weeks. Following the N.C. State game, in which they came out flat and pretty much stayed that way, the players said they need to make sure the games don’t come down to the final seconds.

“We do find a way to win, and we find a way to make plays towards the end, “Cooney said. “But you just can’t come out and say, ‘OK, if it goes down to the end we’re going to win because that’s what we do.’ You’ve got to come ready to play and you have to make the plays early.”

Then again, the Orange is learning what it takes to win close games, and you know there’s going to be one or two of those at tournament time.

“Whether it’s by one, 10 or 20 points, we have to fight through it and as long as we’re winning games, I’m happy,” Ennis said. “You really don’t want to have as many close games as we’ve had, but if that’s what it takes to make us better, then that’s what we have to do.”

Clearly, Boeheim feels the Orange has to get better with the meat of its conference schedule looming. While he said he’s proud of the way he team has reacted in close games, he also said that 25-0 record is somewhat misleading.

“I feel like we played about well enough to be 20-5,” he said. “I think that’s really what we are. We haven’t played better than that.

“That was a tough week we just got through,” Boeheim added, referring to three games in six days against Clemson, Pitt and N.C. State. “This is a tougher next three games coming up (against BC, Duke and Maryland). That’s how you get better.”