Are we embarking on a spiritual age in Hip Hop?

For this story, I asked my Facebook friends a simple question: “Who are the top spiritual rappers in the game and why?” Everyone seemed to have a different list of artists and their responses were definitively connected to how they viewed spirituality and faith. Syracuse’s own Sammy Award-winning musician Joe Driscoll joined the discussion and tagged Grammy Award-winning Hip Hop artist Speech Thomas on the thread.

Thomas, former member of the groundbreaking group Arrested Development, said “It’s obvious from the post and comments so far that spirituality is not understood by most [confused with being political/conscious]. There’s a lot of truly spiritual rhymers that smash on the mic and bring the spiritual view of life in their music.” This led me to expand on my understanding of spirituality and its complex role in Hip Hop.

Dr. Su’ad Abdul-Khabeer, who conducted doctoral research on Islam’s history with Hip Hop at Princeton, believes spirituality means something different to everyone. Some connect it with religion, while for others, it’s more personal and internal — i.e. yoga, meditation, reflection or writing. Personally, I view spirituality under the same lens as being religious, conscious and soulful. The type of music that digs deep into your emotions, those spoken words that send chills up your spine and can spark a powerful movement.

As a young teen, I fell in love with Hip Hop because of its soulfulness. In elementary school, I listened to Special Ed, LL Cool J and Big Daddy Kane because their music was dope. But, I discovered Gang Star, Paris, Rakim, Public Enemy, Nas and 2Pac Shakur in high school. Yes, I included 2Pac on that list. Way before the album All Eyez On Me, 2Pac’s 2Pacalypse was full of spiritual references and emotions. Today, there are plenty of successful rappers that express their spirituality freely, though their names might not be familiar. The majority of them are not on major record labels, received radio support or broke the internet with their YouTube videos, but their fan bases and respect are growing rapidly.

Thi’sl: King Without A Crown

From a religious perspective, artists like Brother Ali, Most Def, Quadir Lateef and Lupe Fiasco use their Islamic beliefs and values to promote consciousness and raise awareness on injustices in their communities. Lecrae, Trip Lee, Mick Jenkins and Thi’sl combine their Christian values and beliefs to make authentic, thought-provoking, powerful albums that are rich in content and storytelling. The connection between these artists’ faith and their music are very clear in their message and projects. Regardless of your religious views, take a listen to “King Without A Crown” by Thi’sl and feel his message of faith, hope and survival.

From a conscious perspective, rappers like Immortal Technique and Talib Kweli passionately express their views on globalization, police brutality and poverty — stirring debates and dialogue all over the social media stratosphere. Jay Electronica, Jasiri and Invincible ignite a movement that raises our conscious awareness of economic plight, religious discrimination, inequality and question our own morality. If you don’t believe spirituality exists in conscious music, I encourage you to listen to “Eternal Sunshine” by Jay Electronica and set your emotions free.

Soulfully speaking, André 3000 from Outkast and Lauryan Hill come to mind. In all of my discussions relating to spiritual Hip Hop, their names keep coming up. They are not categorized under a religion or singled out as being conscious rappers, but artists that express soulful and uplifting music. In this category, I would include The Reminders, K’naan and Detroit’s very own 5 ELA (5th Elementz). These artist make music that elevate, liberate and activate our souls. Take a listen to the album Global Warming 2022 by 5 ELA and prepare for spiritual awakening. 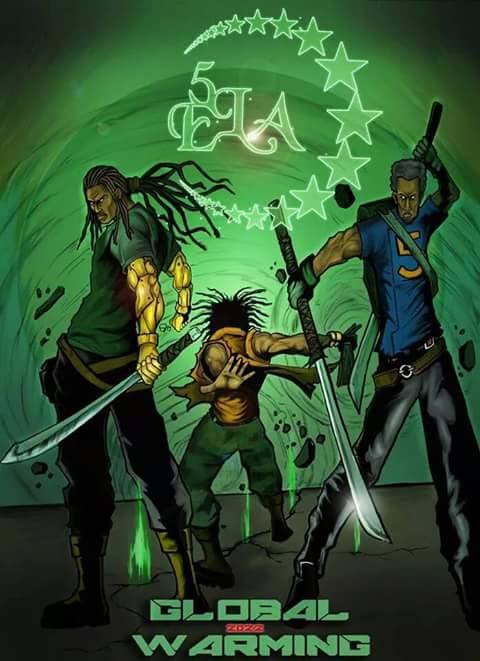 I argue that we are embarking on a new golden age of Hip Hop; one that is stronger in spirituality when compared to the mid-1980s and late 1990s (Golden Age of Hip Hop). These artists don’t all have to be underground or independent. Artist like Common, J. Cole and Kendrick Lamar are making ground-breaking music that have gone mainstream. Jay Z’s “Blueprint” and Eminem’s “Recovery” took us on their spiritual journey, and their fans and critics called these albums masterpieces. Hip Hop is extremely diverse, cultured, educated, emotional and is constantly evolving. The next evolution is taking us to a higher plane, one where more artists are expressing their spiritual views of life in their music. Welcome to #TheSpiritualAgeOfHipHop.