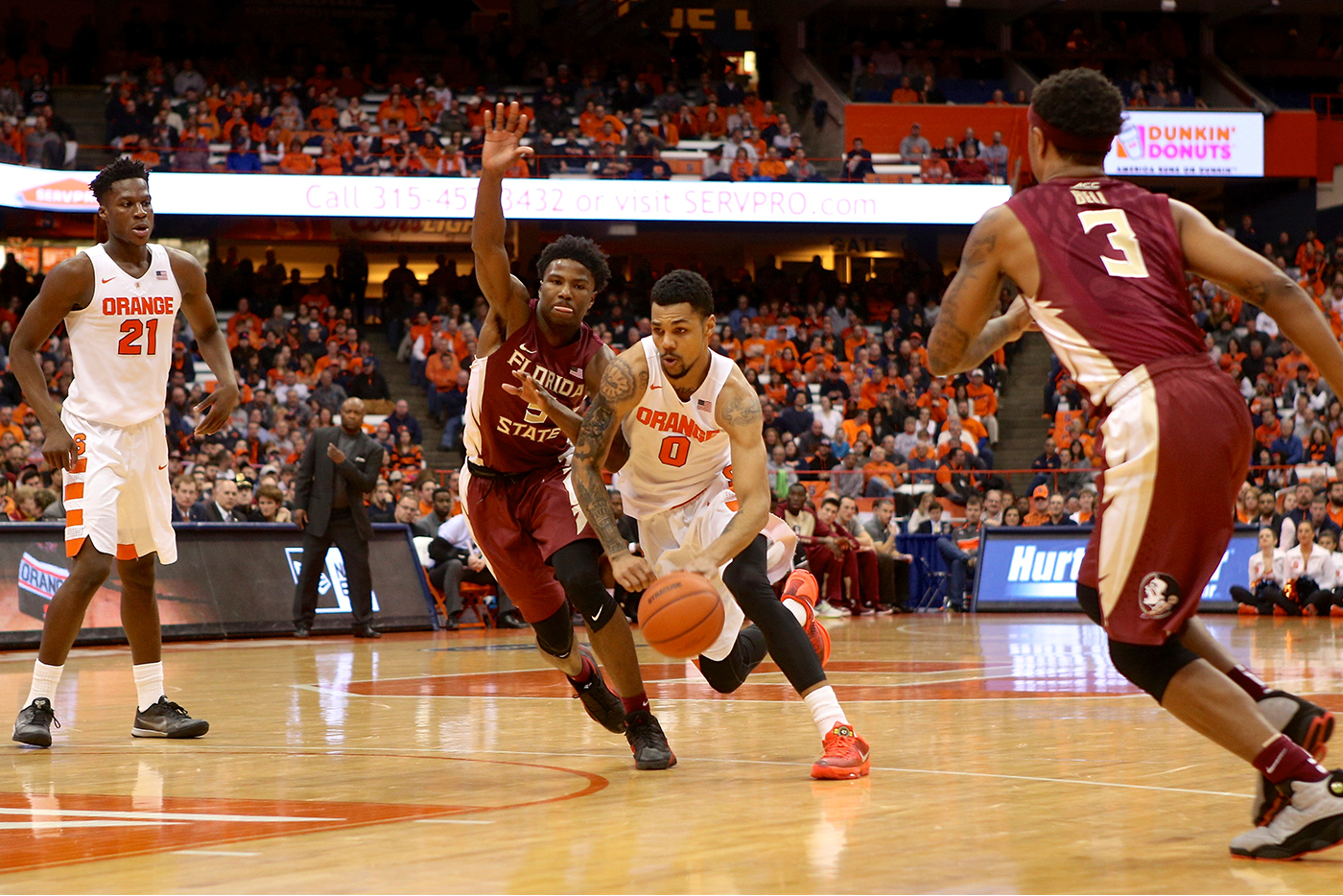 The SU men’s basketball team is hitting its stride as the season begins its close.

In the midst of his Feb. 11 post-game news conference, Syracuse University men’s basketball coach Jim Boeheim quietly slipped in a significant line before switching gears and diving into another topic.

“I know a lot of people gave up on this team a long time ago,” Boeheim said following SU’s 85-72 win over Florida State at the Carrier Dome. “So I’m happy with what they’ve done.”

Translation: “I told you so.” 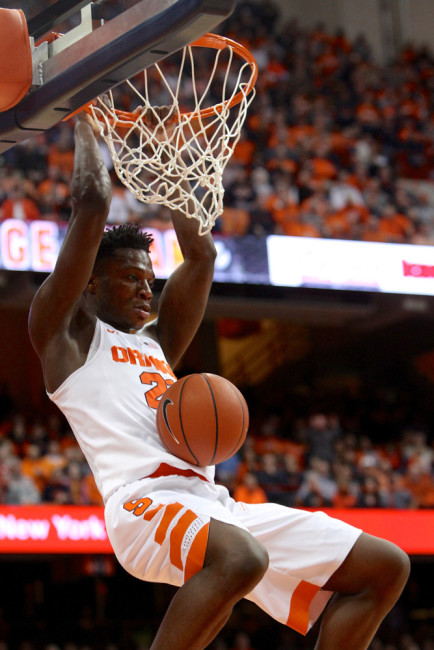 Even more translation: “I told you so, but I’m not going to say more than that because we’re still not where we need to be to make a deep run in the NCAA Tournament.”

Count this writer among those who thought the Orange was destined for the NIT Tournament instead of the NCAA Tournament after an 0-4 Atlantic Coast Conference start that dropped SU’s overall record to 10-7. Worse yet, that 10-7 record included what at the time seemed like four losses (Wisconsin, Georgetown, St. John’s and Clemson) that would surely torpedo SU’s NCAA Tournament resume.

But since an 84-73 loss to then-No. 6 North Carolina Jan. 9 in Boeheim’s return from an NCAA-imposed nine-game suspension, the Orange is 8-1 heading into the homestretch of the season that starts with the Wednesday, Feb. 17, game at No. 13 Louisville.

“We’re getting a little better,” Boeheim said after the Florida State game and before the Orange extended its winning streak to five with a 75-61 win at Boston College Feb. 14. “We didn’t play well against Wake Forest and Georgia Tech, but we did enough (to win). Tonight was a really good night. Notre Dame was a really good night for us. We just have to try and get better as we go along.

“That’s really the whole key,” he continued. “If we can get better, then we can be a good team. If we don’t, we’re going to have problems because it’s a very tough league and a very tough schedule. You get off a little bit, you can have problems. It’s as simple as that.”

With five regular-season games remaining, it appears the Orange (18-8, 8-5 in the ACC) has played its way back into the NCAA Tournament. Four of SU’s five ACC losses were to four then-top-25 teams (Pittsburgh, Miami, North Carolina and Virginia). The losses to Wisconsin and Clemson don’t look as bad now, either, as Wisconsin has rebounded after a rough start and Clemson is one of the surprise teams in the ACC.

And while SU has decreased its number of bad losses, it has boosted its number of quality wins with victories over then-No. 20 Duke (at Cameron Indoor Stadium) and then-25 Notre Dame. Those wins look even better after this past weekend, when Duke shocked No. 7 Virginia and Notre Dame upset No. 13 Louisville.

The Orange also recorded wins over then-ranked Connecticut and Texas A&M in the Battle 4 Atlantis Tournament in November (Texas A&M is still ranked). In this past Sunday’s Ratings Percentage Index (RPI), which is one of the tools used by the NCAA Tournament Selection Committee to evaluate teams, the Orange had a 6-4 record against top-50 teams with wins over Duke (No. 17), Notre Dame (No. 18), Texas A&M (No. 24), St. Bonaventure (No. 33), Connecticut (No. 44) and Florida State (No. 45), and losses to Virginia (No. 5), North Carolina (No. 9), Pittsburgh (No. 39) and Wisconsin (No. 42). Syracuse was ranked No. 37. 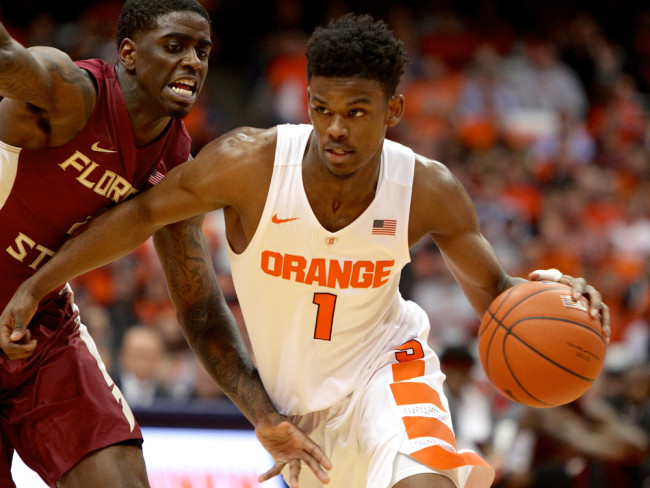 The win over Florida State was particularly important because the teams were tied in the ACC standings and if they’re both on the bubble at NCAA Tournament selection time, the head-to-head meetings will be the tiebreaker. The Orange ends its regular season at Florida State March 5.

“We just want to keep winning games,” SU freshman guard Malachi Richardson said. “Anybody that’s in front of us, we want to knock off, and we’ve still got a lot to prove and want to make sure we can get into the tournament and have a good seed.”

In addition to knocking off a few ranked teams, Syracuse’s second-half surge is important because the NCAA Tournament Selection Committee generally favors teams that are playing well at the end of the season. The committee also takes injuries and suspensions into account, so SU’s 4-5 record without Boeheim may also come into play.

After winning a pair of squeakers against Georgia Tech and Virginia Tech (in overtime), the Orange enjoyed a nine-day break and came out sharp against Florida State and Boston College. SU shot a season-best 62 percent (31-of-50) against the Seminoles and the Orange tied its ACC-best by connecting on 47.8 percent of its 3-pointers against the Eagles (11-for-23). SU’s defense continued to shine, as it shut down Florida State’s high-scoring freshmen Malik Beasley and Dwayne Bacon and Boston College’s leading scorer Eli Carter.

“We’re just clicking right now,” said Tyler Lydon, SU’s freshman forward who scored a career-high 20 points on 8-for-12 shooting against Boston College. “Everybody is playing really well and we’re finding each other (on offense). It was just a matter of figuring everything out and I think we got to that point.”

But to hear Boeheim talk, there’s still work to be done before the Orange can say “I told you so” and mean it.

“We beat four or five teams that are in the top 30 in the country,” Boeheim said. “We’ve done some pretty good things. We just have to keep playing and keep getting better.”