Here’s what’s going on in the world of tech.

The First Computer To Pass Turing A. I. Test 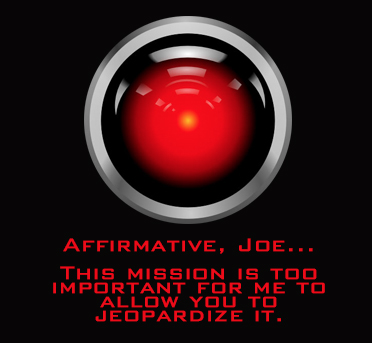 A Russian and a Ukrainian computer engineer designed the first program to fool at least 30 percent of the Turing Test’s judges, being the first to pass. The test was designed by Alan Turing back in 1950 and was almost surpassed by a program back in 2012. The new digital prodigy named “Eugene Goostman” – age 13 – likes hamburgers and candy.

While full cognizance cannot be attributed via the test, the program shows great advancement in modern artificial intelligence with exciting and daunting possibilities.

Astronaut: What are you talking about, HAL?

HAL 9000: This mission is too important for me to allow you to jeopardize it.

Okay, not really, but the Department of Defense’s DARPA (Defense Advanced Research Agency) has successfully developed a climbing device that has allowed a man over 200 pounds, carrying a 50-pound pack to scale a 25 foot flat-glass surface with only his hands and feet.

The technology is designed to help warriors literally gain the high ground quickly in modern urban warfare. It also has industrial and commercial applications. Skyscraper climbing anyone?

Telsa CEO, Elon Musk, has been toying with the idea of making a street-legal, “one in every garage” airplane-car and submarine-car, as in the famous Spy Who Loved Me model, also owned by – you guessed it – Elon Musk. It would not be surprising if he likes his vodka martinis “shaken, not stirred.”

As a practical application, if traffic is jammed during rush hour one will be able to fly to work; that is, unless everyone else decides the same thing at once. #firstworldproblems

Tired of plain old “Amaro” and “Lo-fi” filters on Facebook’s popular photography app? Now, their over 200 million active users can adjust contrast, brightness, and other neat tweaks to make that filter all they’ve ever wanted it to be.

Ready to spend way more time getting the filter just right? Well, now you have about 14 more reasons to do so.

This was just too good not to make it into this article.

“We can neither confirm nor deny that this is our first tweet.” – actually their first tweet (retweeted about 290,000 times)

We don’t expect any earth-shattering secrets here. However, you can follow them just for fun at @CIA, naturally.

According to Nielsen, 93 percent of all app purchases are games. Sounds like a heartening statistic. At least when we look at people thumbing away at their smartphones, chances are they are not seriously planning world destruction, but simply trying to kill pigs, destroy zombies, solve that word puzze, crush candy, or match those numbers in a fury before the world truly comes to an end, or it’s simply time to pick up the kids – one or the other.