A look at how technology is bringing clean drinking water to third world countries.

Over a billion people worldwide are living without clean drinking water.

Every week, 30,000 people die because of sickness deriving from unsafe water. 90 percent of those deaths are children under 5 years old. Young children are most affected by diseases in contaminated drinking water. Every 19 seconds, a mother loses a child because of unsafe drinking water.

The vast majority of these deaths occur in third world countries: mainly, Africa, Southeast Asia, and Latin America. In these countries, usually women and children are forced to spend approximately three hours a day walking, sometimes eight miles to the nearest swamp or river to bring back water that is often contaminated, occasionally meeting with physical or sexual assault along the way.

The time spent traveling to find water per year in Africa alone is 40 billion hours: equal to the entire workforce of France. 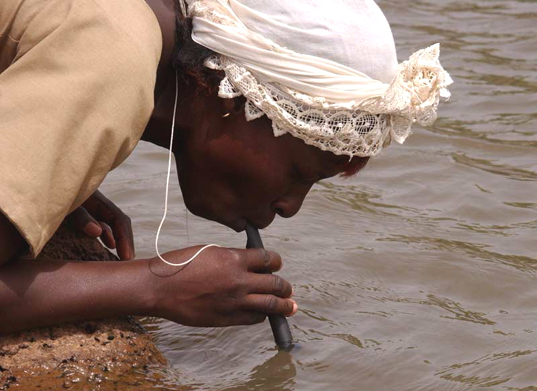 The Lifestraw.
Photo from inhabitat.com

According to inhabitat.com, there are several low-tech cleaning solutions to prevent disease via contaminated water including an item called a Lifestraw – a filtration tube that allows the consumer to drink water with a preventative “straw,” equipped with a ceramic filter that runs at 1-3 liters per hour. Another solution is the “Cycloclean,” a water purifying bicycle uses the cyclist’s kinetic energy, while also providing easier travel to the nearest water source. The Life Sack is a clear plastic pouch that uses the sun’s UV-A-radiation to kill bacteria and also a hamster ball-like “Solarball” that processes three liters of fresh water per day.

Surface water solutions include high-tech purification and filtration systems. One such effective method is sand filtration, which purifies water via a pipeline buried under sand and gravel. According to the Centers for Disease Control, boiling water is the surest method for creating safe drinking water, with boiling temperatures varying per altitude. Salt is often added to improve the taste of water. Chlorination is another advancement that disinfects water, added at a ratio of 5mg per liter. Simple education is another method. Not enough people in third world countries are aware of the damaging and fatal effects of drinking dangerous water.

Where climates support such systems, rainwater and roof catching systems are effective for collecting water to be purified. Many systems integrate purification and collection systems in one.

Wells are a logical source where geography permits; to be dug as far as possible from a body of water to allow for maximum filtration from natural underground elements such as rocks and sand.

Still, the world is a bleak place for people who may not even own a spoon and have no access to these solutions, including the low-tech equipment.

Charity Water is a non-profit organization based out of New York City, founded by Scott Harrison, a former DJ who wanted to give more meaning to his life. Thanks to angel investors, 100 percent of the money donated to Charity Water goes directly to the people in need, according to the charity’s annual reports. A separate budget covers overhead. This was independently audited by certified public accountants in June of 2012 and found to be accurate. An article by Anne Elizabeth Moore on Truthout.org dives into a deeper look at the funding operations of Charity Water, and financial information can be found on the organization’s website. The organizations transparency model also provides GPS coordinates to every project they undertake, along with the financials involved.

Charity Water develops unique water solutions for these desperate communities depending on the climate and geographic circumstances ranging from freshwater wells, to rainwater catchments, complex purification systems, and sand filters. The mission is  to provide sustainable projects for the clean water issues these communities face.

Local coffee roasters and café chain, Café Kubal, has teamed up with Charity Water to help solve the global epidemic of unclean water.

“We all love Charity Water,” said Nate Palumbo, Project Manager and Barista at Café Kubal, “Water is obviously important to our livelihood and our coffee.”

“Also, the locations Charity Water serves – Africa and South America – are where we get our beans from,” Palumbo said. “So basically, we are giving back to the communities. It’s pretty cool.”

Café Kubal is working on several different ways to give a percentage of their profits to the charity, which may include developing a certain dish, or drink, named after Charity Water that reflects the countries they serve, or designating a day of the week where a percentage of everything sold will go to the charity.

To kick off the effort, Kubal is throwing a “Water Ball” at the new downtown venue, Sky Armory – which has its own signature Kubal coffee roast, 7-11 p.m. on Jan. 30. The ball will include hors d’oerves, dessert, and a cash bar with a silent auction, a live band, a photo booth and photo wall, a DJ and dancing.

Café Kubal is working on several different ways to give a percentage of their profits to the charity.
Image from cafekubal.com

A “water walk,” where guests can take turns carrying the 40 pound jugs of water that women usually use to transport water in third world countries will be an eye opening activity at the event as well.

Tickets to the Water Ball can be purchased at any Café Kubal location or on their website. Ticket prices range from $75.00 general, $60.00 for students and military, $12o.oo per couple and group rates are available as well.

Palumbo mentioned all of the the proceeds from the ticket sales are going to Charity Water and within a few weeks following the Water Ball, Café Kubal will decide exactly what percentage of what retail sales will also be donated on a regular basis, he said.

“We cannot put our heads in the sand and pretend nothing is wrong outside of the place we live and think we cannot do anything about it,” Palumbo said. “Charity Water gives us the opportunity to help people outside of our domestic comfort zone.”

According to the World Health Organization, nearly 4 percent of global diseases would be prevented if clean water could be brought to people who cannot obtain it.