Our scars may appear to come from self- inflicted wounds

Ferguson burns while Syracuse smolders. A young man takes two bullets on West Beard, arrives at Upstate in critical condition. A young mother is buried after being shot in Kirk Park. A 17-year-old boy walking on South Avenue is shot nine times Thanksgiving weekend, and, miraculously, is expected to live. Our scars may appear to come from self- inflicted wounds, but take another look. The reaction to the Ferguson grand jury decision not to indict should tell us this if nothing else: It is not just about the cops. What is most striking is the persistent divide: black/white, rich/poor, county/city. How we react to issues near and far is, in large part, due to which side of those lines we find ourselves sitting on. 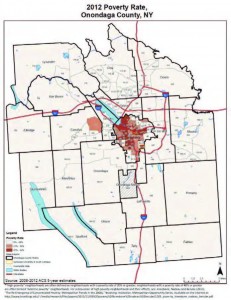 We are, according to a recent report by CNY Fair Housing, among the most segregated communities in the nation. This is not news. It is the best-known fact that most of us ignore every single day. We shrug, as if segregation were a law of nature rather than the product of social policies and market forces that we have chosen to allow to run free. Listen to Sally Santangelo, of CNY Fair Housing: “This compounding of segregation and economic isolation that I think is really hurting our community.” She goes on to say that if you give her the address of a child, she can predict, with a slim margin of error, the race and probably the eventual success or failure of that child. That does not sound like the land of opportunity. It sounds like apartheid. Who decides that it is acceptable for more than half the children in one corner of our community to fail to graduate high school while others await their AP scores and college financial aid packages? Who decides that a black man’s life is worth less than the life of a white man? Bear with me. Sometimes we have to stare straight into the face of despair to find reason to hope. The poor will always be among us, but if we let the free market call all the shots, they will be increasingly herded into an ever-shrinking and ever more dangerous and hopeless corner of our town. Mixed-income communities thrive and the children in mixed-income communities climb ladders that kids surrounded by poverty don’t know exist. How do we reverse this process of apartheid and rebuild communities where professionals and working people and poor folks live close enough to shop together, worship together, attend the same soccer or football games? Let’s look at the fine print in the Fair Housing Report. Tucked inside its list of recommendations is this one: We need to consider a countywide school system. And what, you might ask, does that have to do with housing and poverty? Everything. 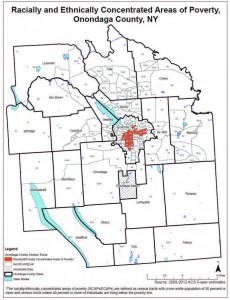 Just a few days after CNY Fair Housing released its study, Mayor Stephanie Miner revealed her wish list for the “Syracuse billion,” a proposal of Gov. Andrew Cuomo. At the top of her list: water mains that won’t break. Down at the bottom, just because it costs so (relatively) few dollars ($10 million, to be precise) was this: Fully fund the Say Yes promise. Think about what Onondaga County would look like if we put these two pieces together. The mayor has said for years that creating a countywide district might be a good idea, but she is a politician and said the idea has no traction. If Say Yes were fully funded, and people believed in the idea, it could give the idea the traction it needs. What if the Say Yes endowment were fully funded? What if the Syracuse City School District were merged with the rest of the county? Struggling middle-class families in the suburbs and struggling poor families in the city might find what they thus far lack: a common cause. We pay lip service every day to the fact that we are a community but, in reality, most people outside the urban core don’t see themselves as having much of a stake in what happens to the city’s youth. This is not a social problem that we can solve through charity. Take every backpack in every store in every mall in the county and stuff it with books and pencils and Cliff bars, and you still would have the same demographics that condemn poor kids to substandard education. Meanwhile, we grow further apart, retreat behind our walls, one side growing more and more enraged while the other grows more fearful. Someone needs to start tearing down those walls.