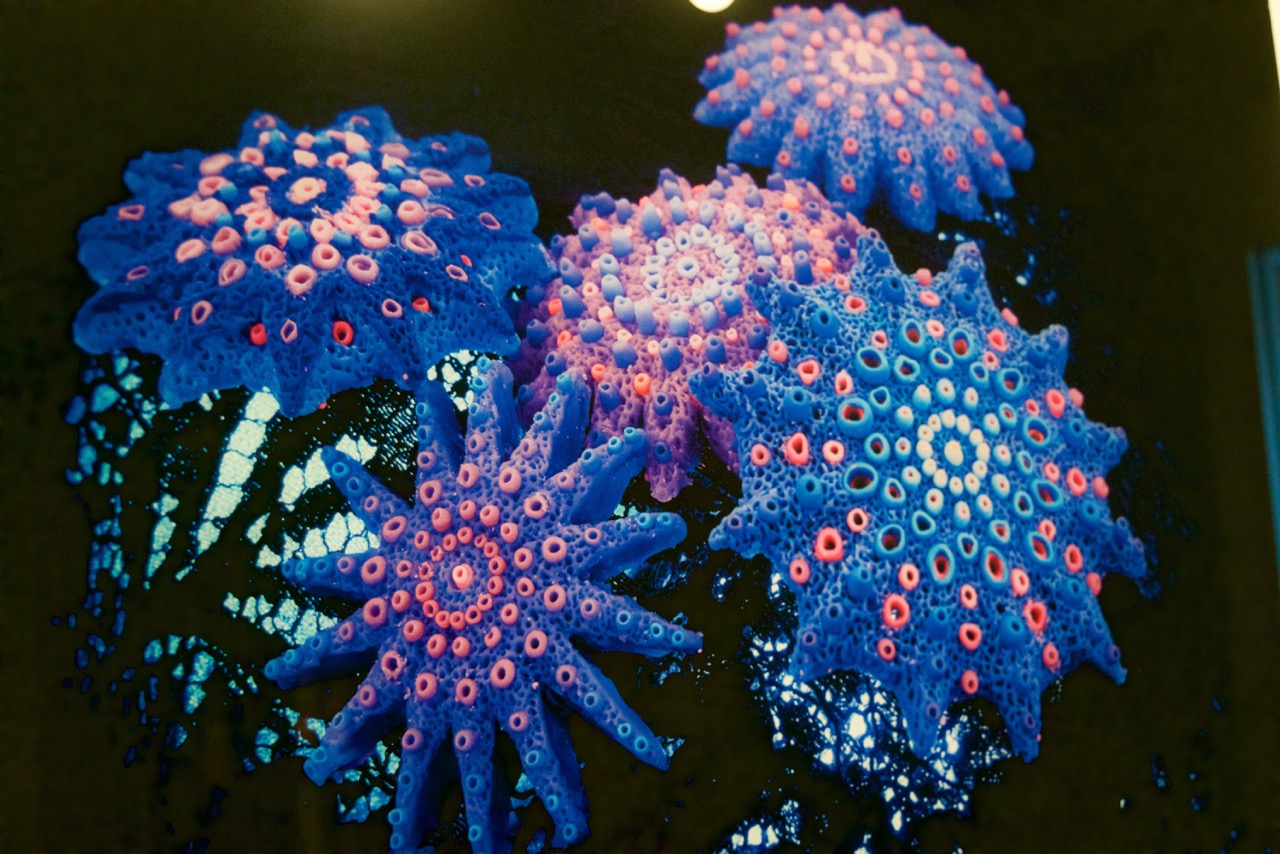 Editor’s Note: This story was written and submitted by Abby West, a senior in SUNY Oswego’s English and Creative Writing Program.

Each year, a grouping of innovative young artists presents the fruits of three years’ worth of work for Syracuse University’s Masters of Fine Arts thesis exhibition. This year, 31 candidates from the School of Art, School of Design, and Department of Transmedia have contributed to Hiding in Plain Sight, an energetic show intended to rereflect “an age where judgment is shaped by ‘alternative facts,'” according to the exhibit’s press material.

Hiding in Plain Sight includes sociopolitical statement pieces from some students and deeply personal works from others. The show appears in three separate venues through May 13: Point of Contact Gallery in Armory Square’s Warehouse, 350 W. Fayette St.; Shaffer Art Building on the SU campus; and the Community Folk Art Center, 805 E. Genesee St.

SU graduate program coordinator Laura Heyman points out how the annual MFA exhibition has grown from a single venue to three gallery locations. This expansion has helped students produce more installations in larger spaces, thus offering candidates a better chance to establish themselves as serious artists. “These changes have given the students a fantastic platform to introduce their work to a broad audience, which is exactly the point,” says Heyman.

Exhibition curator Shehab Awad says he chose this year’s theme after hearing the candidates repeatedly refer to items and ideologies that are, indeed, hidden in plain sight. “The more I thought about it, the more I realized it related to a number of their concerns and practices,” says Awad, who is also the curator of exhibitions and programs at the Institute of Arab and Islamic Art in New York City.

The theme is a way to connect a diversity of interests and approaches. “It’s really their chance to showcase themselves,” Awad says, “and the results of their research and to be as experimental as they’d like and take risks, which I think can be really liberating.” 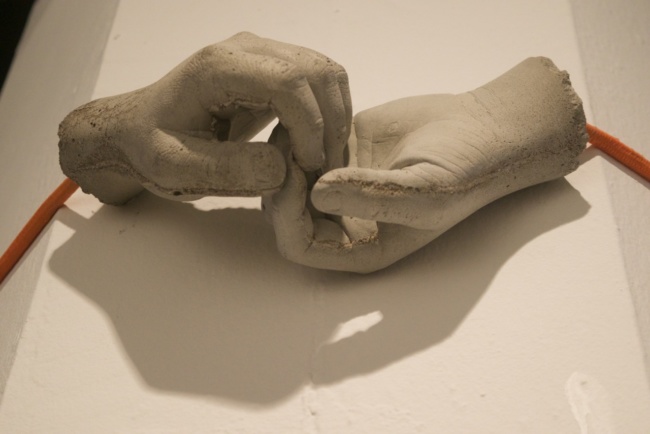 The multimedia works of Mirra Goldfrad provide an example of this experimental spirit. One Goldfrad installation centers on concrete casts and soundpieces. She recorded her own voice every day for a month to later produce an hour of audio that plays on a continuous loop while viewers assess her installation.

Goldfrad also utilizes smells and jarring juxtapositions, as she presents mirror bodies with concrete shoes, halved grapefruits peeking out of concrete slabs, and even a marble-papered shelf that houses jars of pickled peppers, lemons and olives.

“All of my work revolves around memory,” Goldfrad explains. “I am more interested in what these things can pull from an audience or individual than my own compulsions in making them. (My work) is meant to build an atmosphere, almost place you inside of my head.”

“Hiding in plain sight is being visible and invisible at the same time,” Awad says. “It’s about straddling both sides of the spectrum and a potential strategy, or a mode of being, in today’s sociopolitical climate.”

Joe Turek’s portraits of unnamed, numbered white men on wax — who are literally de-faced when Lurek melts the wax after painting — clearly offers one such strategy. According to Turek, his work is an attempt to “undermine the abuse these men are able to carry out through the use of their identity” and to subvert the larger aesthetic power of traditional portraiture of powerful male subjects.

Chelsey Albert’s mixed-media installation, “Then and Now: What It’s Like to be Young and Arab in America,” explores the effects of cultural marginalization and vilification. And Antone Dolezal’s layered images of the desert Southwest considers the region’s colonization by waves of technological optimism on one hand and new age religiosity on the other.

Jack Honeysett’s “Satirical Index” is a series of videos that play on the screen of an iPhone 5 — one of the main portals through which the contemporary world is connected. But Honeysett also chose this format to create an intimate and singular viewing experience, highlighting a key theme of isolation in a screen-suffused world that is threaded throughout the piece.

Although reluctant to see his work as narrowly political, Honeysett says of the piece’s suggestive title, “I invoke this term as a standpoint from which to heckle in a world in which I, and many others, feel out of place — an outsider divorced through physical, emotional and conceptual dispossession.”

Artist Aysha Hamouda comments, “Within our current Post-Fact Era, and the continuous rise of divisive tribalism in our political parties, facts are disregarded when in discord with ideologies.” Hamouda’s striking works involve ultraviolet paint and other means of viewer disorientation.

The MFA candidates seem hopeful that careers involving art are also hiding in plain sight, even if those careers take different forms and paths. Some are taking time to build their philosophies and portfolios as they support themselves temporarily through work unrelated to their art, while others are delving directly into residencies, teaching or professional work.

According to Honeysett, “One of the hardest decisions to make is whether to pursue work related or unrelated to art, and which will help our careers most. If working in a coffee shop after grad school allows you to support your art practice, then great. It might be that an art industry job sucks all the fun out of it for you.” 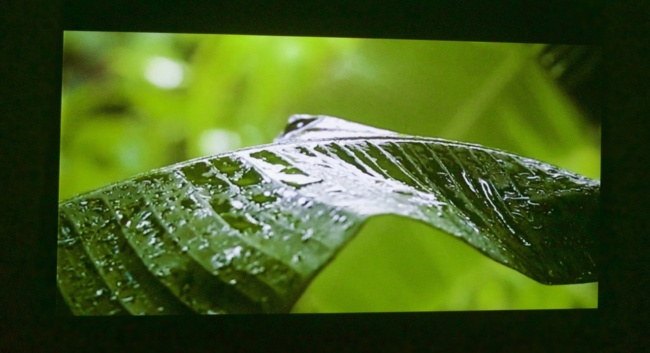 The pieces in the exhibit range in medium and content depending on the artist’s interest. (Michael Davis/Syracuse New Times).

Honeysett also strongly believes that one’s practice as an artist should be unconnected with the drive to be famous or widely recognized. “I don’t make art for recognition. I make it because I want to,” he says. “It would be very sad if being in the top 1 percent of successful artists was the only goal, validation or reason for pursuing an art career. Thankfully, there are so many ways to take an art practice. It would be like calling any scientist who hasn’t won a Nobel Prize a failure. However, it is just this kind of misfortune that puts people off the idea of studying art, that they undervalue it unless it makes them money.”

Regarding her future aspirations, Aysha Hamouda resolves to stay grounded in the present: “I am only focused on the next two years. I like not knowing. I used to think of uncertainty as this terrifying void, but actually I’ve grown to find it quite liberating.”

Mirra Goldfrad identifies with a similar spirit of adventure and continuing evolution. “I look forward to hearing about the incredible places people will go to and the things they will make. I sound really corny, but it is the people I have met here that make the future an exciting thing for me to think about and hard to predict.”

Hiding in Plain Sight, Syracuse University’s Masters of Fine Arts thesis exhibition, runs through May 13 at three area galleries. All locations are free and open to the public.

Gallery hours are Mondays through Fridays, noon to 5 p.m., and by appointment.