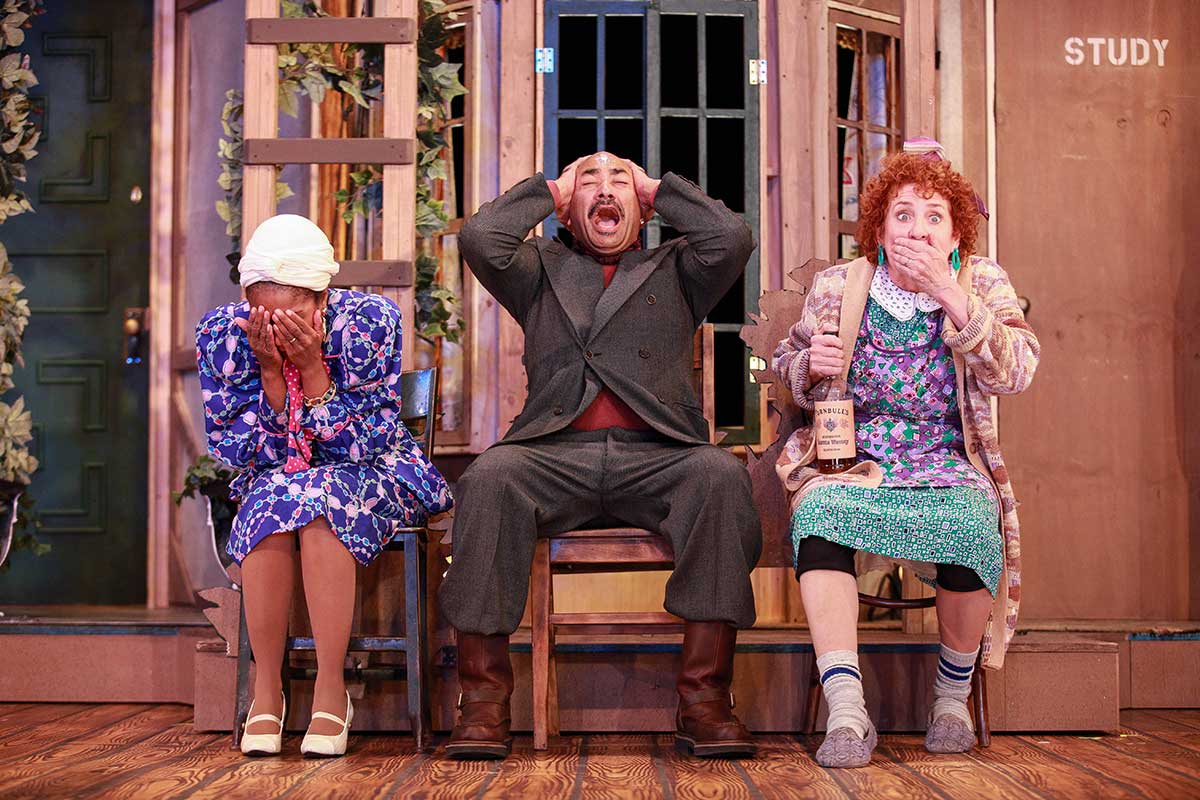 Far from being mindless, what Syracuse Stage’s “Noises Off” has to say about vanity and art resonates deeply. The show runs through Sept. 30.

The freshness and surprise of an expertly executed farce are immediate and universal. No one ever read Cliff’s Notes to get to the hidden meaning of a farce, but Robert Hupp’s direction of Michael Frayn’s Noises Off — running through Sept. 30 at Syracuse Stage — zips by so speedily that laggards will miss some of the gags. Far from being mindless, what Noises Off has to say about vanity and art resonates deeply.

Since its London opening in 1982, Noises Off has been widely performed. Most audiences know what they’re getting into, as with Cats or The Odd Couple. This may enhance, rather than ruin the fun. The opening-night crowd barely suppressed applause when it viewed scenic designer John Iacovelli’s luminous Cotswald-elegant paneled set, featuring seven slammable doors and an eighth with a curtain for even faster exits. It looks sturdy and, better yet, has about an inch clearance from the floor, making room for silent casters.

We need to explain the premise, however. Action opens on a late-night technical rehearsal of a sex farce titled Nothing On in a presumably dreary theater in the town of Weston-super-Mare. Nobody’s prepared and everything is going badly. Cockney housekeeper Mrs. Clackett explains in a telephone conversation (the most flat-footed form of exposition) that the owners, Philip and Flavia Brent, are tax exiles in Spain. They are English people who pledge to live outside the country most of the time but will pay dearly if they are found at home. Showing up unexpectedly is real estate agent Roger Tramplemain, who would like to sell the property but meanwhile uses it for sin with his girlfriend Vicki.

While all of this is great fun for the actors, it’s easier to follow than it sounds. To reduce confusion, the Syracuse Stage program has two cast lists. One gives the people hired for the production and whose portraits appear with short bios. Before the title page, following playwright Frayn’s instructions, are the bogus programs for Nothing On.

The plot of Nothing On could not be simpler. Two couples would like some discreet rumpy-pumpy but keep intruding on each other. Roger really does have a client for the property, a hooded Arab sheikh who turns up late in the action. And the house will be entered by an incompetent burglar, played by the incorrigible tippler Selsdon Mowbray (Brad Bellamy).

Three more characters appear in Noises Off who are not part of Nothing On, starting with the constantly exasperated director Lloyd Dallas (Andrew Ramcharan Guilarte), an unrestrained philanderer. Not only is he intimate with Brooke Ashton (Eliza Huberth), playing the estate agent’s often scantily clad main squeeze Vicki, but he has impregnated the hyper-sensitive assistant stage manager Poppy Norton-Taylor (Kate Hamill). The constantly oppressed stage manager Tim Allgood (Blake Segal) must cover emergencies as best he can when performers don’t appear on stage.

Audiences familiar with earlier productions of Noises Off will notice some changes here, many at the request of the playwright. Frayn has tinkered constantly with the script and allows the rights to a professional company like Syracuse Stage only if it uses the most recent version, from the year 2000. Thus, there are more gags with the plate of sardines, the prop no one can keep track of, plus more physical comedy, fights with broomsticks and a dazzling tumble down the stairs.

Whether it comes from Frayn or director Hupp, the character of director Lloyd Dallas (Guilarte) is more sympathetic than previous incarnations. Earlier Lloyds have been threatening offstage voices, barking martinets like Zach in A Chorus Line. Here he enters through the fourth wall, employing an aisle as a vom, and once on stage he is more likely to plead than to demand. And in the madcap third act he has to fill in for a role, upping the ante of his stage manager.

The paradox of this production is that as the action becomes more frenzied, with offstage actors chasing each other with axes, it also becomes more tightly choreographed. It takes twice as much practice to get things perfectly wrong. Hupp is presenting a hand that looks very much like the one in The Three Musketeers from last season. Once again, our director is the star.

Every member of the cast is in top form but divide generally between the verbals and physicals. Some do both, like Dori Legg as the ever-present Dotty/Clackett and Seth Andrew Bridges as the tongue-tied shouter Garry, who also takes a nosedive down the stairs. Kate Hamill turns the anguish of the misused Poppy into unexpected humor, while Brad Bellamy wrings more laughter out of Selsdon’s modest lines than has been seen in previous productions.

As for the physicals, Eliza Huberth is the major scene-stealer as the nylons and garter-belt wearing Brooke/Vicki. This Juilliard graduate is constantly in motion, mouthing other characters’ lines, trying to cover from what purportedly is a sense of inadequacy. Stealing right after her is splendid Michael Keyloun as the tax cheat Frederick/Philip, who gambols up the stairs with his trousers twisted around his ankles.

Never upstaging the company, Kate Hamill as Poppy is a rising national star who has been cited as the Wall Street Journal’s Playwright of the Year. The Ithaca College graduate’s new stage adaptation of Jane Austen’s Pride and Prejudice will appear at Syracuse Stage in late March.

Hot Times in Homer: Center for the Arts continues to bloom
Teen musician, Netflix actor Taz Niederauer brings his guitar to The Ridge
To Top