Immigrants and New Americans use Salt City Harvest Farm in Kirkville to grow produce native to their homelands and the U.S.

Turn off Fyler Road in Kirkville and enter a whole other world, one that’s lush, green and peaceful. Hops, famous for flavoring beer, grow in profusion. There’s a vineyard with Frontenac grapes and an apple orchard with dozens of varieties, each planted in their own row.

The land is owned by Theresa and Brian Letcher and their son, Dylan, who have donated a portion of it to the Salt City Harvest Farm, a 35-acre nonprofit farm that provides a place for members of Syracuse’s North Side New American community to grow — in more ways than one. People plant and grow produce, find community and gain entrepreneurial and life skills.

“They’re the farmers,” Theresa Letcher says, while offering a tour of the property. “I’m not a farmer.” 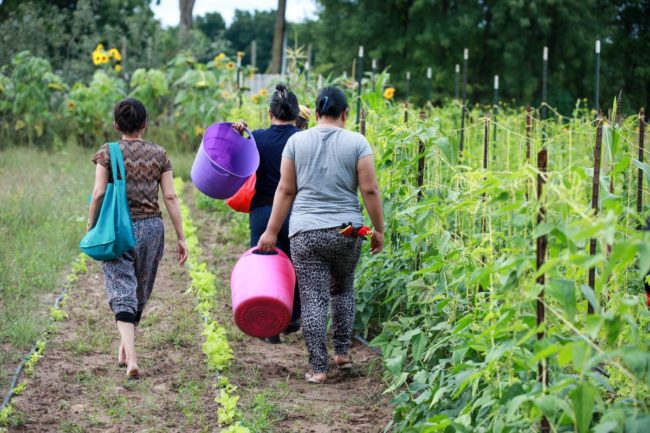 The land was vacant until about 2012, when the Letchers started to plant vegetables, which they donated to food pantries on the North Side. In doing so, they made connections with churches and community groups.

Matthew Potteiger is a landscape architecture professor at SUNY College of Environmental Science and Forestry and a Salt City Harvest Farm advisory board member. Potteiger says the farm grew out of several community gardens on the North Side created by Syracuse Grows, a nonprofit that supports grassroots community gardening and urban agriculture efforts.

Community gardens in urban settings serve a need, Potteiger says, but many in the North Side New American community are from rural areas and possess a great deal of knowledge about farming and agriculture. Some had livestock, like goats, oxen and pigs. They need more room to grow, literally and figuratively — an open space where they can walk barefoot on the warm earth and provide food for their families.

The farm is tended collectively, by different groups at different times, says farm manager Graham Savio, who joined the farm this year. There are also incubator plots, where participants in the Syracuse Refugee Agricultural Partnership Program — New Americans who hope to one day have farms of their own — learn about the Central New York soil, the region’s fickle weather and short growing season, how to manage crop production and the steps needed to buy land and start a business. 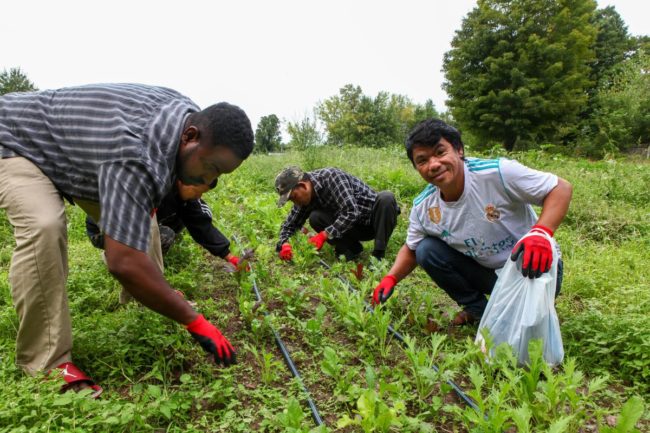 Late in the afternoon on a recent Monday, a group of deaf New Americans boarded a minivan at the White Branch Library on Butternut Street in Syracuse and made the 20-minute trip to the farm. They took in the scenery, crouched to pull weeds and checked the progress of the vegetables they planted earlier in the season. The farm is hard work, Savio says, but also a respite from the challenges of navigating a new home, culture and customs.

Through two interpreters, one using American Sign Language and speaking English and one using foreign sign language, the New Americans told visitors how they are using what they grow on the farm.

“I had some and shared some with my mother,” said one.

“I planted it, I weeded it, I cooked it, I ate it,” said another, bringing smiles and laughter.

“Where we live, there’s no place we can grow food,” added another.

Monu Chhetri, who serves as a coordinator and interpreter for the deaf New American group, said she was born in Bhutan and spent 19 years in a refugee camp in Nepal before immigrating to Syracuse. “I prayed to God to come to America,” she said.

Some of the produce grown by New Americans at Salt City Harvest Farm is available for sale at the Downtown Syracuse Farmers Market and the Central New York Regional Market. It has also been used in CSA shares available through Brady Farm, an urban farm in Syracuse.