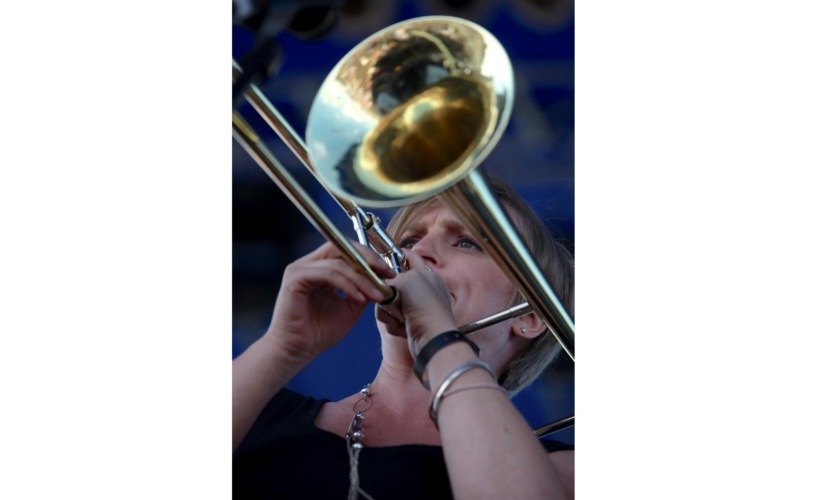 On May 19, local multi-instrumentalist, singer, songwriter and bandleader Melissa Gardiner made a major announcement: Her trio, MG3, featuring Gardiner on trombone, drummer Byron Cage and Willerm Delisfort on organ, had just won the Bucharest International Jazz Competition at EUROPAfest.

“It’s still kinda hitting me,” she reflects about the music event, which ran May 12 to 19 in Romania. “I had never gone international with my own group before and never competed like this.”

Gardiner heard about the competition two years ago and followed up on the opportunity. The group was accepted, but didn’t have time to raise funds to travel to the competition. So they deferred for a year in order to mount crowd-funding campaigns that brought in more than $3,000.

The group went to Romania on May 11, then spent the next week moving through the rounds as they competed in the finals against bands from Italy, France and other countries. MG3 went on to tie for first place with a band from Italy.

“The thing that is most important to me is that we went over and had fun and it was a big win for, not America, but for Syracuse and upstate musicians in general,” says Cage, who has toured with blues giants Joe Louis Walker and Tommy Castro. “I hope this draws attention to all the other musicians in the area. Really, that was my goal.”

Cage had previously played in Romania, but had never competed like this. “Usually, I’m just out gigging,” he says. “This was a totally different vibe. It created a new character in me. I played a little differently. I wanted to win.”

Although there was a cash prize for the win, Gardiner also made several music connections along the way.

“You need to expand beyond your own local hometown and to do it, you need a proper agent, a promoter, a lot of money or to already be successful,” she says. “To get to that point, it’s a grind. So you have to go for opportunities like this and put yourself out there constantly. It’s a good way to develop the band, too, some external motivation. It helps to be working toward something bigger.”

Gardiner also met a sister band from Syracuse, Italy; they’re hoping to do a musical exchange in the future. “Success still has to come from being proactive,” she admits. “You’ve got to follow up with them. Nothing will be handed to you on a silver platter.”

The performances were notable on a personal level for Gardiner: Delisfort had been her original organ player in the trio in 2010 and 2011 when she lived in New York City. Gardiner worked with Delisfort at a Harlem jazz club, and “it’s how my jazz sound started,” she recalls.

“It was good to bring him and Byron together,” she says. “They made some magic. With the distance, it may be difficult to always work with him, but it was a cool opportunity to bring him back on board.”

Delisfort has similar feelings. “It was a beautiful reunion,” he says, “a beautiful fellowship.” For Delisfort, who moved from Miami to New York City in 2009 and has toured Europe with several groups, competing was also a new experience. The location influenced him, too.

“For me, it was kind of a double whammy,” he says. “My in-laws are from there (Romania). The whole experience was beautiful — to witness the other side of my family and to hear those interpretations of the music from all different countries. Winning it was the icing on the cake.”

Gardiner hopes to complete an MG3 album by year’s end and to focus on her singing. She also hopes the Central New York community realizes her gratitude: “I didn’t want to ask too much of people with the crowd-funding campaigns. I was blown away. I want to emphasize thanks for our donors and the community for believing in me and my band.”

She also notes her gratitude to LeMoyne College as the professional development grant they issued her helped cover expenses to make the trip possible, too.

Gardiner, who has faced gender inequality in the music world, also brought home a win for female-led groups. “To be honest, that was one of the cultural things I noticed,” she says. “I’ve been privileged that people know me here and treat me with respect. There (in Romania), people would come and talk to my bandmates, but not to me. It was an unapproachable sort of thing or people were afraid to connect with me. It was something I had to force initially. I’ve had to prove myself time and time again. It always happens. But we won, so fuck it.”