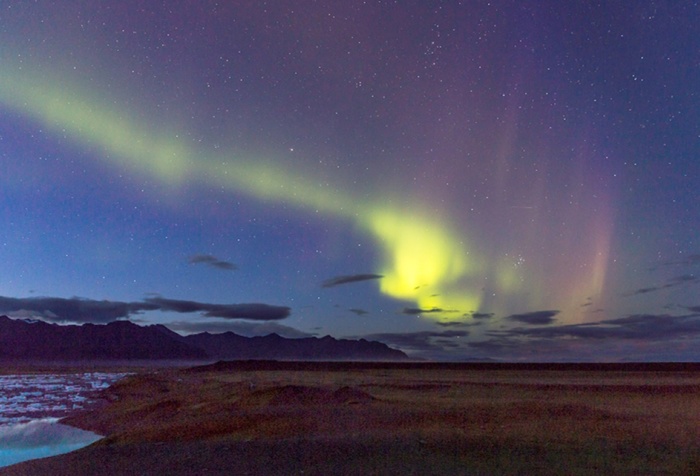 One constant is Young’s ability to create interesting, incisive images. In “Caught,” he portrays a lakeside scene in winter featuring a couple of snow-covered trees. “RIP,” meanwhile, captures a sky lit up by a storm and striking colors. A third photo features countryside seemingly interrupted by a small waterfall.

In “Fractals,” one of several images taken in Iceland, his camera’s lens focuses on a rock formation on land and then on two stone towers offshore. Those towers, subject to erosion and weather-beaten on an ongoing basis, are more than an example of an enduring landscape.

Here Young is communicating a sense of wonder, reflecting on our connection to the world around us, and posing questions about nature and our own existence. How long will the towers last? What’s the future of humans on this planet? What happens when each of us dies?

Because the show presents a bunch of his images, it’s easy to access various types of photography. Young has created small cyanotypes like “Cedars, Green Lakes,” more expansive works such as the Iceland images, and photos like “Hopeful,” with its portrayal of a scene at Clark Reservation. It’s clear that he’s a versatile photographer.

The photos by Marna Bell originated during a trip from Santa Cruz, Calif., to Yosemite National Park. Part of her “Luminous Journey” series, they depict hillsides, mountains and clouds, roads and land, a huge treetop nicely trimmed, and a lone human in the midst of rock climbing.

In making the prints, Bell used a process called piezography, which produces soft-toned images and has several visual impacts. Land looks baked out. Roads are integrated into the landscape to the point that they appear to be paths. Turbines dot a hillside but don’t play a dominant role; they are viewed in the distance.

Most of all, the photos have a painterly touch, as they recall various painters’ depiction of landscapes. In addition, they mark yet another stage in Bell’s artistic development. Over the last 20 years, she’s worked on various series including “Mementos,” “Imperfect Memories” and “Hudson Valley Past/Perfect.” The Edgewood exhibition documents her latest project.

Errol Willett is best known for his stoneware creations. At Edgewood, he’s showing a selection of 15 glassworks, plates and other forms made from recycled glass. He cut up glass left over from a long-defunct store, processed the pieces, and ultimately placed them in a kiln. That resulted in art glass with a muted tone. The works, greenish in color and pretty, make up a relatively new body of work. Willett has been making glassworks for about a year.

Finally, DeeAnn vonHunke has her sculptural jewelry on display. She has created necklaces, broaches and bracelets, working with stones such as jasper, opals and lapis. These are typically large pieces with distinctive colors.

The exhibition provides ample exposure for all four artists, smoothly works around the concept of journeys, and presents a number of artworks that stand out. It’s a well-executed, successful group show.