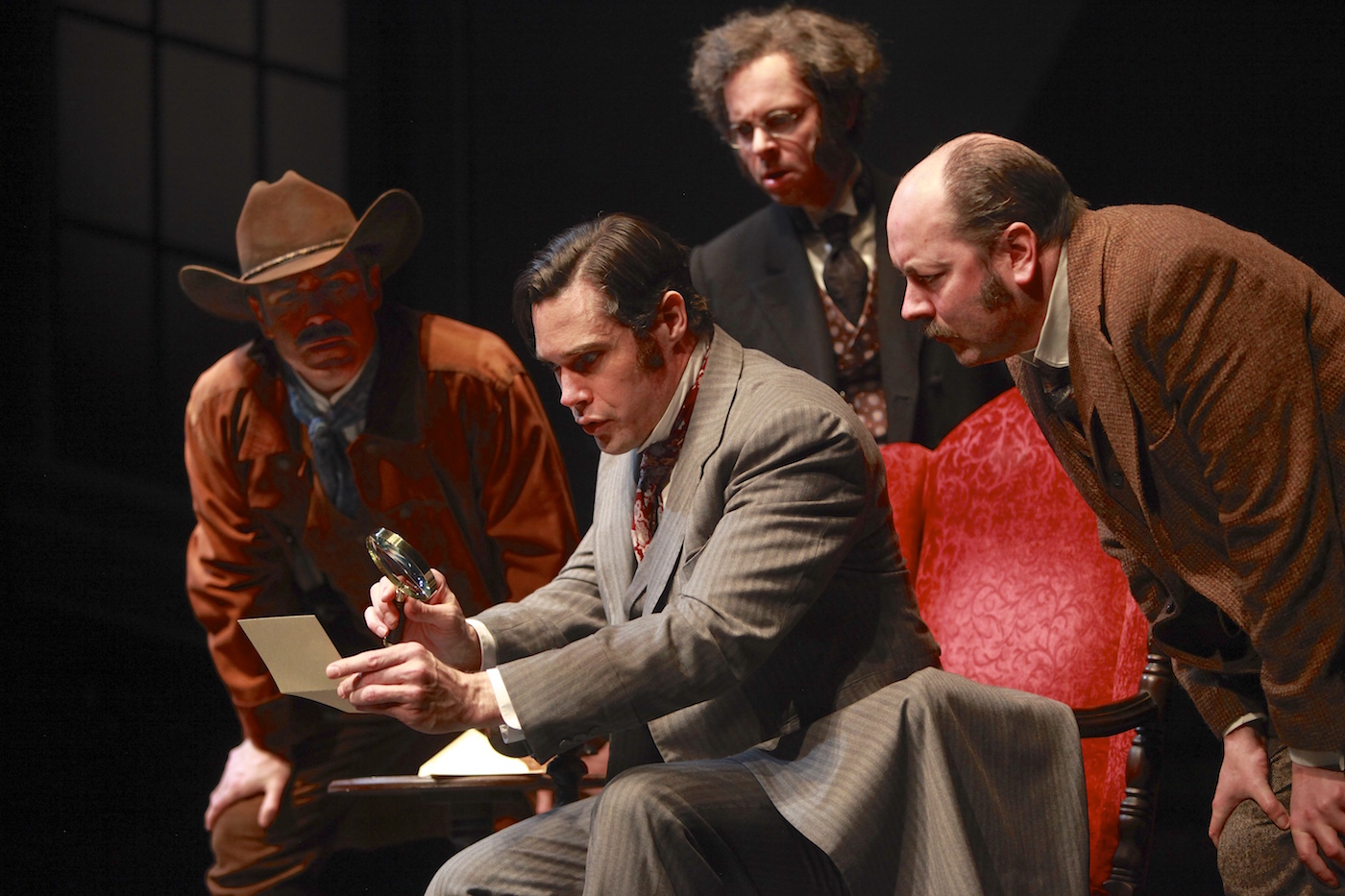 The landmark Syracuse Stage production of The 39 Steps (October 2010), regardless of its box office merits, is still fondly remembered more than five years later. At first blush Baskerville: A Sherlock Holmes Mystery looks like a creature of the same species. Both are rapid-fire spoofs with frantic actors taking multiple roles as they negotiate twisting plots in which characters disappear and then pop up again.

Returning to direct this farce by Ken Ludwig (Lend Me a Tenor) is sure-handed Peter Amster. What’s different is that at the center are two of the best-known figures from crime literature: Dr. Watson and Sherlock Holmes, the latter becoming the straight man in this comedy. 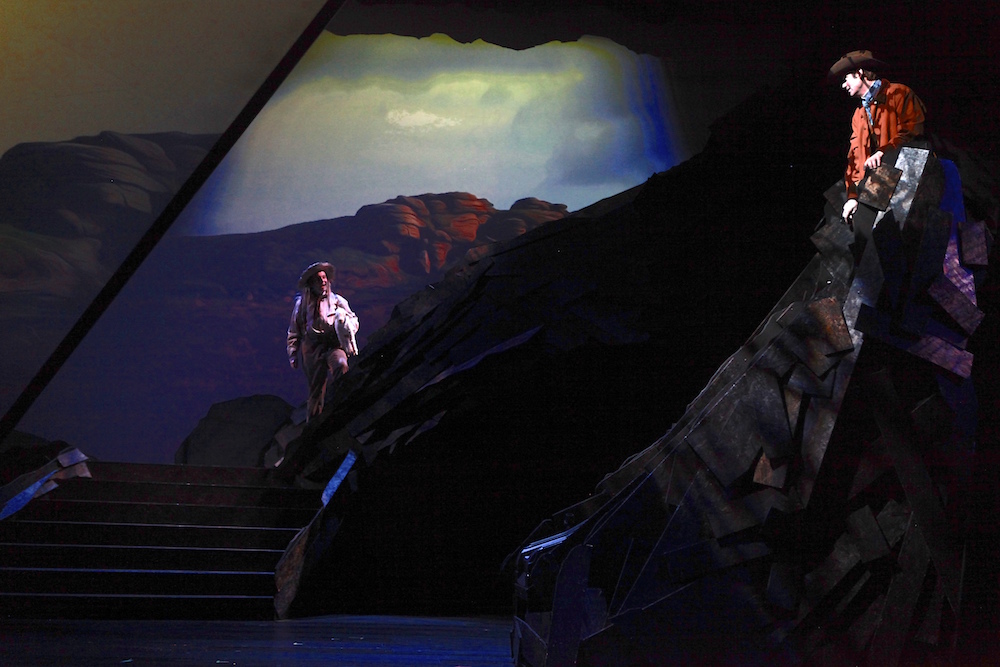 Different also is that 39 Steps spoofed a 1935 Alfred Hitchcock movie, one that created the romantic chase genre in which a man and a woman stay one step ahead of the baddies.

Baskerville, on the other hand, is based on the 1902 novel The Hound of the Baskervilles, which Sir Arthur Conan Doyle composed after an interval when the author had grown tired of the character depicted in short magazine pieces. He craved greater complexity, and he certainly delivered that.

There are 35 characters, played by three actors. Not all are in the novel because two are the Puccini figures Floria Tosca (Barbra Wengerd) and Baron Scarpia (Jonathan Spivey), who appear when Holmes and Watson decide to take a break at the opera.

Spoofery in general has a kind of seat-of-the-pants irreverence that favors minimal sets and actors sitting on stools. Yet production standards are extraordinarily high for this madcap, multi-character spoof, with posh visuals reminiscent of Syracuse Stage’s Around the World in 80 Days and Travels with My Aunt. The costumes here are MGM-level, including one for Sir Hugo Baskerville (Gil Brady), the decorated cavalier redcoat of the benighted ancestor who brought down the curse upon the family.

The set includes a winding staircase upstage, which doubles as a path into the mountains. Window frames and doorways appear lightning fast as the characters perambulate. In the single most endearing scene in the show, a heavy-accented Castilian desk clerk (Spivey) appears with the desk suspended from his neck and shoulders.

Action begins when Holmes (Matthew Greer) and Dr. Watson (Liam Craig) are examining a walking stick that has been left behind. The two will examine the stick, testing their powers of observation and deduction.

It’s a cliché setup, and revisionist playwright Ludwig is toying with it. Watson’s interpretations are plausible but, alas, all wrong. Holmes steps in with his usual superior tone and gets everything right, just before the stick’s owner, Dr. Mortimer (Spivey) enters to confirm what Holmes has just said. Ludwig knows we could not bear very much more of that and begins to throw more theatrical goodies Watson’s way.

Holmes is still an essential role. Under Amster’s direction, Greer never tries to evoke any of the well-known screen Sherlocks, such as (good grief) Basil Rathbone. He’s cool and cerebral, as must be, but a bit sexier than the template. We expect that the great detective has no romance in his life and does not get on well with women, but Greer’s Sherlock could charm the girls. 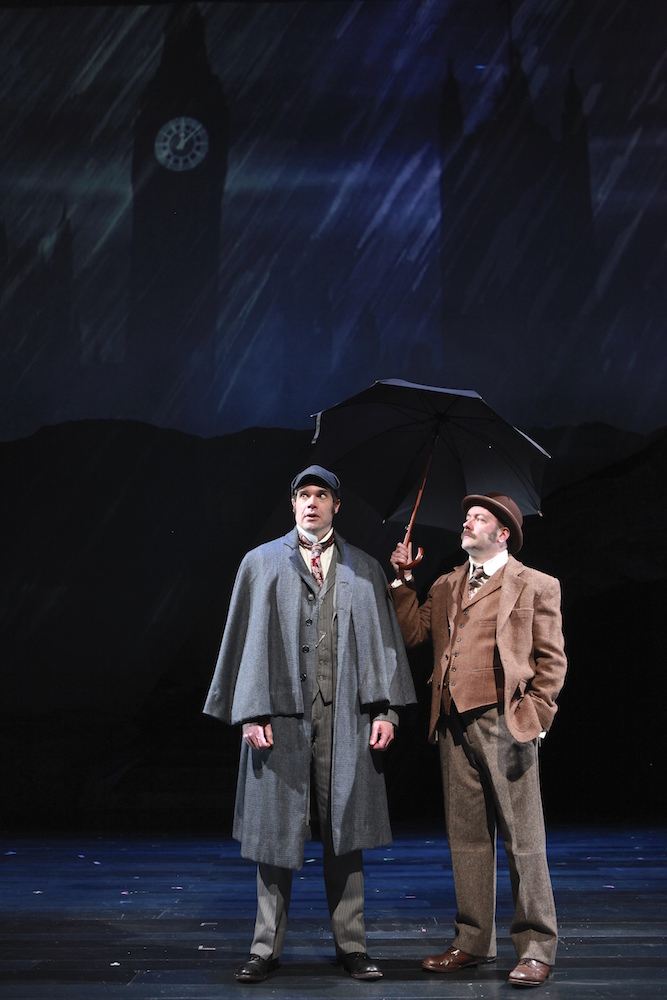 Craig’s British accent as Watson is cool and authoritative. Local audiences last saw him speaking down home Alabama as Heck Tate, the most benign townie in To Kill a Mockingbird.

Mortimer brings the first major exposition of the plot, starting with a manuscript outlining the curse on the family begun by Sir Hugo in the 17th century. More to the moment, Sir Charles Baskerville (Brady) was recently killed under mysterious circumstances. The next heir, Sir Henry (Brady again), is about to arrive from America.

What follows, of course, is a detective story with lots of detail to remember about ambiguous characters. Among the more suspicious figures are the entomologist Jack Stapleton and his purported sister, and the household servants John and Eliza Barrymore (all four played by Spivey and Wengerd).

Here, alas, is where Baskerville differs from 39 Steps. In the former the romantic couple is fleeing from nefarious and resourceful German World War I spies and potential terrorists. There was no need to keep them straight. Here it is necessary to keep the Stapletons straight from the Barrymores, be cautious that they might be misrepresenting themselves, and further to remember what they say.

Things are made worse when the dialogue is speeded up in heavy accents, with too many lines not coming across. The best fun comes from spoofing the spoof, as in the late scene where Gil Brady plays both Sir Henry and Inspector Lastrade by walking six feet to the left or right and switching his accent and hat.

We may all know Holmes and Watson, but how many audience members have read Hound of the Baskervilles or even have seen the superlative 1939 movie version (with Basil Rathbone) or the Hammer Films 1959 version (with Peter Cushing) or even the dreadful 1978 spoof with Dudley Moore? In an informal opening night survey at intermission and the post-curtain party, your humble reporter could not find one.

Writer’s note: We hear that the Syracuse Media Group’s customer service staff and top circulation managers were also recently laid off. And the community misses the work of longtime columnist Sean Kirst, who left the company last fall. It’s hard to overstate the deep loss Central New York feels without Kirst’s columns nudging us to be a better community.