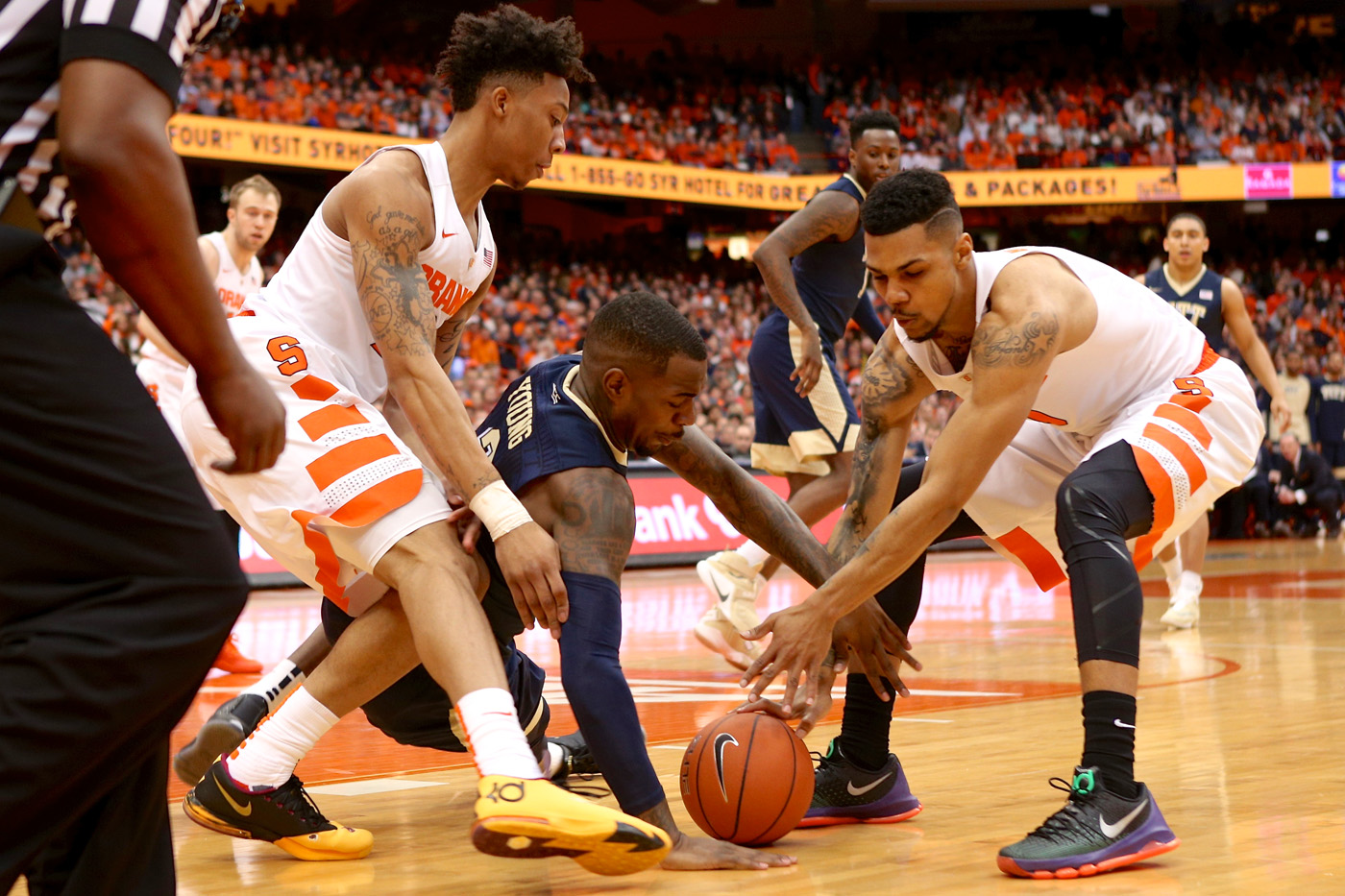 The Syracuse Orange made it into the big dance, but just barely.

Did Tyler Roberson grab a rebound? Are leisure suits and big, round glasses back in style? Did the local media disappear?

No, Boeheim had one of the happiest days of his 40-year coaching life because the Orange, seemingly on the outside looking in for this year’s NCAA Tournament, was miraculously included when the field of 68 was announced Sunday, March 13.

“This is the happiest I’ve been on Selection Sunday in all my years of coaching,” said Boeheim, who became SU’s head coach in 1976. “I couldn’t be any happier for this group.”

Syracuse, which finished 19-13 overall, received a No. 10 seed in the Midwest Region and will face No. 7 seed Dayton (25-7) on Friday, March 18, 12:15 p.m., at the Scottrade Center in St. Louis. If the Orange gets past Dayton, it will meet No. 2 seed and Big Ten Conference champion Michigan State in the second round Sunday in St. Louis.

Most NCAA Tournament bracket experts had SU on the bubble or out after the Orange lost its first Atlantic Coast Conference Tournament game to Pittsburgh March 9. That was Syracuse’s third loss this season to Pitt (another bubble team that got in), and its fifth loss in its last six games, supposedly wiping out SU’s impressive 8-1 stretch that followed an 0-4 start in the ACC.

University of Oklahoma athletic director Joe Castiglione, the NCAA Tournament Selection Committee chairman, said the Orange received one of the 36 at-large bids because it had more wins against teams ranked in the top 50 of the Ratings Percentage Index (RPI) than the bubble teams that were left out. In fact, SU notched wins against five teams in the top 32: Texas A&M (18), Duke (20), St. Bonaventure (30), Notre Dame (31) and Connecticut (32).

“I held hope that our road win at Duke, the Texas A&M and Connecticut games (at the Battle 4 Atlantis Tournament in November) and beating five teams in the top 30 would play out,” Boeheim said. “I think once we started seeing some of the teams get in that only had two wins against the top 50 or top 75, we did have a chance then.”

In 2007, the nation sympathized with the Orange when it was left out of the tournament despite a 22-win season. This year, SU’s selection left many college basketball followers scratching their heads and bemoaning the absence of mid-major darlings such as St. Bonaventure and Monmouth.

“Even with all the known weaknesses of the RPI, do you know how hard it is to have the number Syracuse had given their decent non-conference schedule and an ACC slate?” wrote ESPN’s Joe Lunardi, the most well-known of the bracketologists. “The only way to do it is to lose too many games to the wrong teams. That’s why William & Mary, Stony Brook, Hofstra, Chattanooga, Valparaiso, Little Rock, UNC Wilmington, Yale, Princeton, Akron and, yes, Monmouth all had better RPIs than the Orange.”

But here’s what the ratings and numbers don’t necessarily tell you: When the Orange is at its best — when at least two out of the Michael Gbinije, Trevor Cooney and Malachi Richardson backcourt triumvirate are hitting their 3-pointers, when Roberson is cleaning up the glass, and when Tyler Lydon is providing a spark off the bench — SU can play with anyone. Just ask East Region No. 1 seed North Carolina, which had to rally late to beat SU at the Carrier Dome and had to hold off the charging Orange in Chapel Hill, N.C.

“We proved we were a good team,” Cooney said. “We had one bad loss (to St. John’s) but all of our losses were close games. We were in every single game and not many teams in the country can say that. I think that says a lot about us as a team.”

Indeed, the Orange had to overcome several on-court obstacles, including a first-year starting point guard in Gbinije, three freshmen who played key roles (Richardson, Lydon and Frank Howard), a center returning after missing almost two years with injuries (DaJuan Coleman), and Boeheim’s NCAA-imposed nine-game suspension that stretched from early December through SU’s first three ACC games. The Orange went 4-5 in those games with devastating losses to St. John’s and Georgetown.

But now, in a surprising twist, the Orange will get a chance to avenge its most recent NCAA Tournament loss to Dayton in the second round of the 2014 tournament. (SU’s self-imposed ban kept it out of the 2015 tournament.) The Flyers, who captured a share of the Atlantic 10 Conference regular-season title with a 14-4 record, outlasted a cold-shooting Syracuse team 55-53 in Buffalo in 2014.

Coached by Archie Miller, the brother of Arizona coach Sean Miller, the Flyers reached the A-10 Championship semifinals this year before losing to eventual champion St. Joseph’s. Dayton is led by a pair of All-Atlantic 10 players: junior guard Charles Cooke (15.7 points per game) and senior forward Dyshawn Pierre (13.0 points, 8.6 rebounds). The Flyers are just 4-4 in their last eight games, and starting forward Kendall Pollard (10.6 points, 4.8 rebounds) has been bothered by a knee injury.

For the Orange, the NCAA Tournament gives seniors Gbinije (17.8 points per game) and Cooney (12.8) one more chance to leave a mark on the program — and put a smile on their coach’s usually dour face.

“I am so happy for this team with everything that has happened this season and last season,” Boeheim said. “For Mike and Trevor to get back to the tournament is just great and I couldn’t be any happier for them. I am really happy for these guys and we just have to be ready to go.”

No. 4 Seed for SU Women: While the Syracuse men’s team had to sweat out its NCAA Tournament invitation, the Orange women’s team received the highest seed in school history and will host at least one and maybe two tournament games at the Carrier Dome this weekend. No. 4 Syracuse (25-7) will face No. 13 Army (29-2) on Friday, March 18, 2:30 p.m., in the first round of the Sioux Falls Region. If SU wins, it will face the winner of No. 5 Florida/No. 12 Albany Sunday, March 20, at the Dome (game time to be determined).

News and Blues
Rocking Out
To Top