Now you can start dreaming. . .  of a deep run in the NCAA Tournament. . . of a return to the Final Four. . . of a national championship.

Just past the halfway mark of the season (17 regular-season games down, 14 to go), the Syracuse University men’s basketball team has stamped itself as a national title contender. Coach Jim Boeheim’s Orange is 17-0 (4-0 in its first year in the Atlantic Coast Conference), ranked No. 2 in the nation behind Arizona, and positioning itself for a No. 1 seed in the NCAA Tournament. 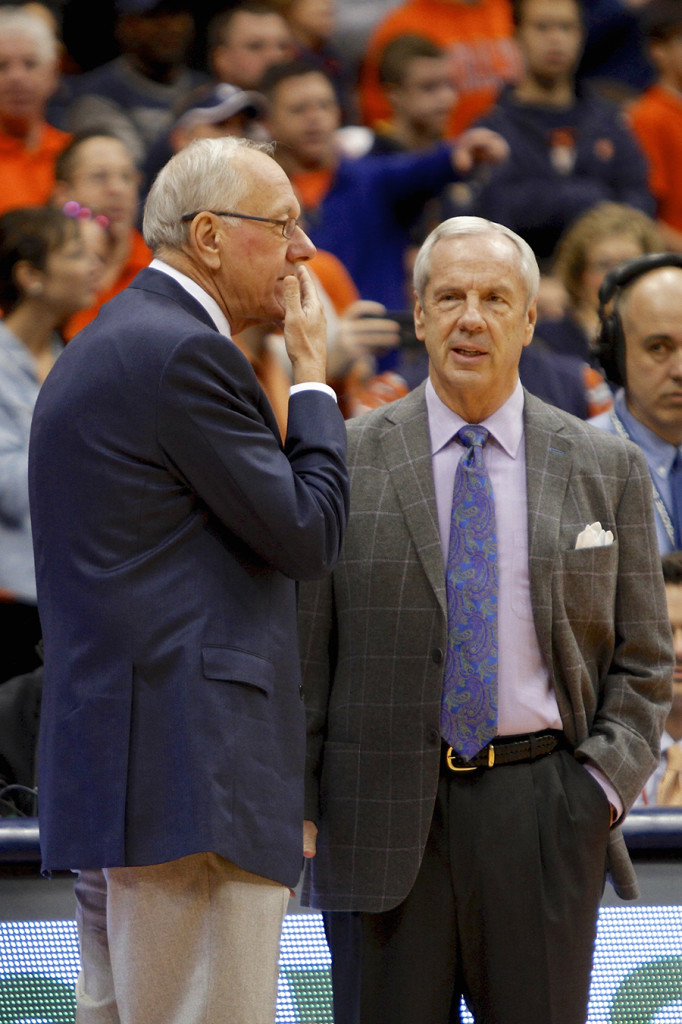 “Syracuse right now so far this year has played better than everybody else,” North Carolina coach Roy Williams said after the Orange thumped his Tar Heels, 57-45, on Jan. 11 at the Carrier Dome. “They’ve accomplished more, they’re 16-0, and everybody is going to have to play their best to beat them. You’re not going to beat Syracuse unless you’re playing at the top of your potential.”

The Orange has passed every test so far this season. It went undefeated during a difficult non-conference schedule that included top-10 teams Baylor and Villanova, along with several solid teams such as California, Indiana and St. John’s. In ACC play, it has defeated defending ACC champion Miami and traditional ACC powerhouse North Carolina at home, and taken care of business on the road against lighter weights Virginia Tech and Boston College. The Orange has rallied from huge early deficits, and it has won close games in which it was trailing near the end.

“They are that good,” Indiana coach Tom Crean said after the Orange blasted the Hoosiers 69-52 in early December. “Syracuse is legit. They are a great program, with a great coach and they understand what they’re doing.”

About the only thing the Orange hasn’t done is gone on the road and defeat a top team. SU will get that chance throughout the rest of the ACC schedule, with road games against Virginia (Jan. 20), Notre Dame (Feb. 8), North Carolina State (Feb. 26) and Duke (March 8).

“We have to get better as a team, but hopefully we can get better without losing,” SU star forward C.J. Fair said. “If we happen to lose, I think that’s going to be one of the biggest tests for us to respond. Hopefully, we won’t have to go through that.”

Looking ahead to the postseason, a No. 1 seed in the NCAA tournament could mean the Orange would never have to leave the state until the Final Four, at Cowboys Stadium in Texas. SU could play the second and third rounds at the First Niagara Center, in Buffalo, and the East Regional at Madison Square Garden, in New York City.

“Every team that is good has a chance to win a national championship, that’s college basketball,” Boeheim said. “It’s been that way for the past 10 years, and if you have a top-15 team, you have a shot of winning it all. There’s going to be a lot of ups and downs throughout the season, and we have some tough games ahead as we go forward. How we react to these future games will determine if we are tough enough to make a Final Four.”

As we look forward to the next two months before the ACC Tournament, here are five reasons to think that SU will be able to position itself for a Final Four run:

While Michael Carter-Williams was an exceptional point guard for the Orange last season and is in the NBA, ask yourself this question: At the end of a close game, would you rather have the ball in the hands of Tyler Ennis or Carter-Williams?

Ennis, a 6-2 freshman, ranks among the national leaders in assist/turnover ratio (91-to-21 through the North Carolina game) and steals. Beyond the numbers, Ennis has a tremendous feel for the game and seems to know just when to attack and when to pull it back.

“There’s been so many great point guards here {at SU} you hate to say he’s as good as anybody,” Villanova coach Jay Wright said after Ennis and the Orange overcame a 25-7 deficit to defeat the Wildcats 78-62 Dec. 28 at the Dome. “But after just playing them, it’s tough to speed him up, {and} he makes plays at the end of the clock. He’s really good.”

Of the eight SU players who get the most minutes (counting DaJuan Coleman, who’s recovering from a knee injury), only Fair, forward Rakeem Christmas and center Baye Moussa Keita have been regular players before the season. Ennis, guard Trevor Cooney and forward Jerami Grant are first-year starters, sophomore guard Michael Gbinije is getting meaningful minutes for the first time after transferring from Duke and Coleman is a sophomore who played limited minutes last season.

“We have a lot of guys that are going to get better,” Boeheim said. “This is the first time Trevor Cooney and Tyler Ennis are in meaningful games, and even Jerami {Grant} didn’t play a lot last year and didn’t play as much when we made our run. This team can get better.”

SU fans don’t want to think how this season could have turned out if Fair had elected to enter the NBA draft after last season. Instead, the 6-foot-8 senior forward leads the Orange in scoring (17.4 points per game through North Carolina) and ranks second in rebounding (5.8 per game) and continues to serve as a model leader for his team and a match-up nightmare for the opposition.

“He’s a load,” North Carolina’s Williams said. “There’s a reason he was picked as ACC preseason favorite for player of the year.”

Given all of SU’s other weapons, it might not seem like a big deal to have Coleman (4.3 points, 4.2 rebounds in 13 minutes per game through North Carolina) sidelined by a bruised left knee. But the 6-9, 290-pound Coleman gives SU another big body for the back of its 2-3 zone defense, five more fouls if needed, and when he starts it enables Boeheim to bring Grant off the bench as perhaps the best sixth man in the country.

“I think {Grant} was a little tired today,” Boeheim said after the North Carolina game. “I liked him coming off the bench, but DaJuan is still coming back. He {DaJuan} practiced this week and he’s looking better–he’s more mobile. We need a couple more practice days with him to see how much he’ll be able to do.”

It’s one thing to watch film and practice against SU’s 2-3 zone. It’s another thing to play against it.

Some Big East Conference teams (Louisville, Marquette) that played against the Orange every year figured out how to attack it, but none of the ACC teams have that kind of history with it.

“Their zone is very good, there’s no question about that,” said Williams after the Orange held his Tar Heels to 39 percent shooting and their lowest point total in 17 years. “There’s other teams that play zone, but they probably play it as well as anybody.”

In fact, while SU has had its moments on offense this season, it has been the defense that has been most consistent and kept the Orange undefeated.

“We really expect if we play good defense, we’re going to win the game,” Ennis said. “We’re not going to have a perfect game, we’re going to try to put together the best game we can and hope it’s enough.”

So far, it has been. But for this team, a half-season of highlights isn’t enough.

“Just winning the ACC, that’s our first goal,” Grant said. “The second goal is to win the national championship.”