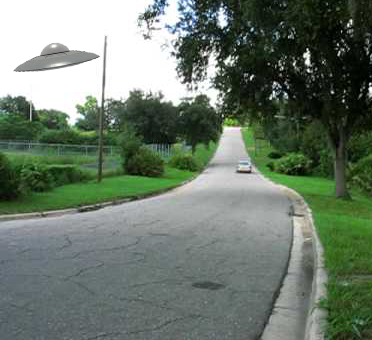 Have you visited New York’s “Spook Hill” in Middlesex?

There is a dirt road west of Middlesex where they say that if you put your car in neutral, your car will roll up hill. The place has been dubbed “Spook Hill” and has been a part of state lore for as long as I can remember.  This particular area of Yates County on the east side of Canandaigua Lake is a known Native American Burial Ground.

While I haven’t been there, my parents and siblings have, and they report the experience was rattling. My mother observed that all the houses in the immediate area were empty, boarded up and many “For Sale.” Of course, this observation was made about 30 years ago, when I was in the service. Who knows if that is the case now?

Regions like Spook Hill are commonly referred to as “gravity hills” or “magnetic hills,” and if you Google either term you will find a Wiki site that lists such sites around the world. This Wiki site lists about 40  international gravity hills and 41 in the United States. So why talk about gravity hills?

It just so happens someone asked me about Spook Hill. “… Surely the Spook Hill area must be a hotbed for UFO activity,” he said. Needless to say, I checked the relevant databases and was astonished to find that it wasn’t. The telling thing wasn’t great amounts of UFO activity but the surprising lack of it.

An all-time-search (1890 to present) of the MUFON database yielded only three sightings in Yates County. A check in the NUFORC database revealed only an additional five. Most of the sightings were in the Penn Yan area, eight miles away from Middlesex. In the past 120 years, the data revealed only one sighting in the Middlesex area. In fact, Yates County seems to have the lowest UFO sighting index in the New York!

In Ufology circles, it’s generally suggested that most UFOs are reported to “hover” by riding the waves of Earth’s magnetic field, like a boat floats upon the water.  A possible explanation might be that these gravity hills or magnetic hills might be troublesome for the UFO propulsion systems, but who knows? I am certainly not an expert in intergalactic propulsion systems, so it’s anybody’s guess what the real story is. Perhaps we’ll have to wait for the weeks and months after Disclosure when we can answer these sorts of questions.

If you want to visit “Spook Hill,” you can find directions on Google, though I recommend that you save that excursion for summer’s day.

Sightings Round up: As the months get colder, the number of people out and about decreases and sightings tend to fall off. Interestingly enough, neither national UFO database has logged a single UFO sighting report for New York for the first 10 days of December! Like the NY snow birds, the UFOs seem to be in Florida.

I’m going to share some retro sighting reports from my old stomping grounds of Chemung and Steuben counties:

20 July 1964, at about 1 a.m., an Elmira motorist reported seeing several objects. One hovered over his car, two others hovered near a telephone phone. The observer says there was a strange sensation that his body was “scanned,” after which the one object winked out and the other two darted away at great speed.

27 March 2001, at about 9 p.m., a Lowman motorist and his daughter spotted a disk-shaped object flying near their car. The object was reported to be metallic gray and appeared to be seamless. The passengers in the auto felt a “static electricity sensation” when the object briefly hovered over the vehicle.

20 Jan. 2002, at about 6 p.m., an Elmira motorist reported a yellowish-orange fireball-like object hovering over an apartment building on Davis Street.

29 May 2002, at about 1 a.m., a Corning resident observed a fireball-type object. He reports seeing a star-like light moving in a circular manner. Then, the object began moving toward the observer and hovered about 20 feet above the ground. Scared out of his wits, he could only stand there and watch the object fly off towards the woods.

10 July 2010, at just after sunset, a Corning couple witnessed a bright object in the sky that was moving from north to south. They knew it wasn’t an airplane because the object seemed to “wander around” as it silently traveled across the sky and finally disappeared.

14 July 2010, at about midnight, an Elmira resident went outside and noted about seven very bright balls of light traveling across the sky south to north. The observer says the objects silently crossed the sky in about 30 seconds.

20 Sept. 2011, at about 9:15 p.m., a Horseheads resident observed a solid bright red light in the sky near his home flying just above the tree line. Accustomed to aircraft from the Chemung County airport, he states this was like nothing he’d ever seen. The object finally zoomed off at tremendous speed.

4 Jan. 2013, at about 1:39 p.m., a Painted Post resident was in the Walmart parking lot when her son spotted a shimmering light moving across the sky. As they watched the bright object, it stopped for a few moments,  then disappeared.

If you have a New York UFO story to tell, I’d love to hear about it. All respondents’ names will be kept confidential. Email me at [email protected]

Back To Basics
Points of Reference
To Top