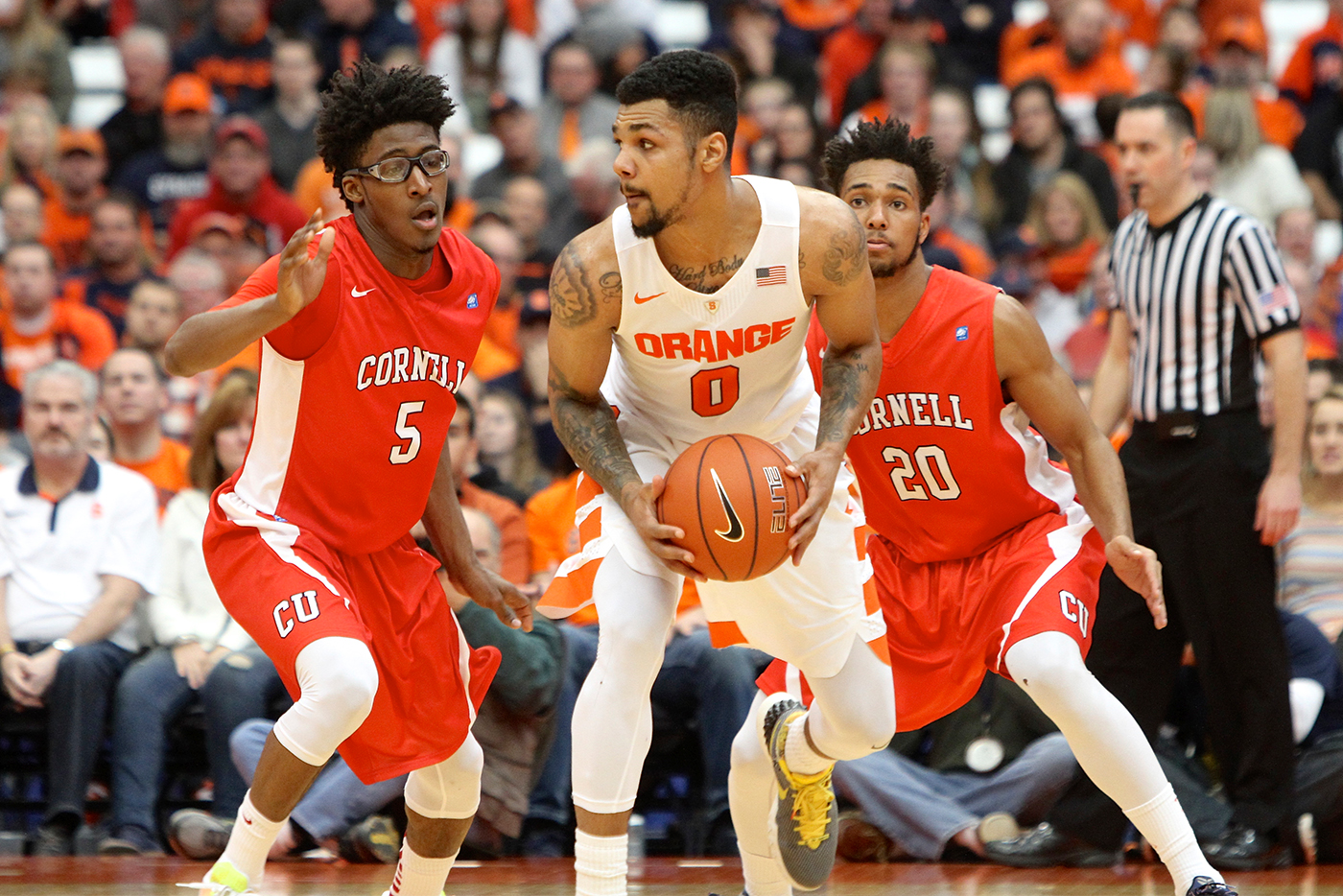 Questions heading into the Orange men’s basketball season are revisited.

Back in early November, before the Syracuse University men’s basketball team opened its regular season, we listed five key questions about the team that would determine if the Orange returned to the NCAA Tournament.

With the non-conference schedule in the books and a brutal Atlantic Coast Conference schedule starting Wednesday, Dec. 30, at Pittsburgh, let’s revisit those questions and see if the 10-3 Orange can move from the bubble in late December to the Big Dance in mid-March: 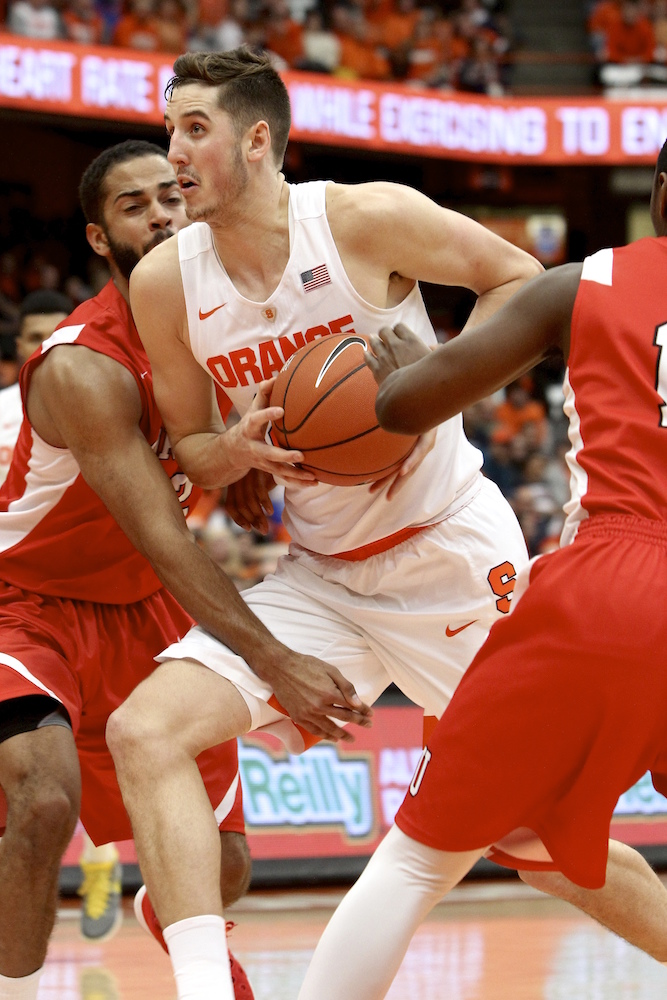 Is There Enough Depth? Not enough to overcome a long-term injury to a starter or sixth man Tyler Lydon.

The Orange has only nine scholarship players, but that’s not necessarily a problem because Coach Jim Boeheim usually goes only seven deep anyway. However, the No. 7 through No. 9 players — guards Kaleb Joseph and Franklin Howard and center Chinonso Obokoh — have been wildly inconsistent, playing several minutes and contributing one game and then disappearing the next.

Starting guards Michael Gbinije and Trevor Cooney are playing all but three minutes a game and those minutes will become more stressful in the ACC. And there will be games when SU’s smaller frontcourt finds itself in foul trouble against bigger and more physical ACC teams. So it’s imperative that SU stays healthy and gets at least some productive minutes out of Joseph, Howard and Obokoh.

Will DaJuan Coleman Hold Up? So far, yes. Other than the 6-foot-9 Obokoh, 6-9, 255-pound center Coleman is SU’s only true big man and he’s back this year after missing much of the past three years because of serious knee injuries. Coleman has started every game and is averaging 5.5 points and 4.5 rebounds in 15.4 minutes per game, and he seems to be slowly and steadily improving. In SU’s final non-conference games against Montana State and Texas Southern, Coleman combined for 27 points and 11 rebounds in 32 minutes.

SU’s best lineup this season has been with Lydon, a 6-8 freshman forward, manning the middle. But against the bigger ACC teams, the Orange needs Coleman to keep improving and stay out of foul trouble.

“We need those seven rebounds in 20 minutes, we need his physical presence so when we play against those guys in our league and they are in there, he is banging, battling, putting his weight on them and tiring those guys out,” SU interim coach Mike Hopkins said after the Texas Southern game.

How Will Michael Gbinije Handle the Point? Expertly. Gbinije has been the Orange’s best player, and we no longer even think about the fact that he started last year as the sixth man and never played point guard regularly until midway through last season. The 6-7 senior leads the Orange in scoring (18.6 points per game) and assists (4.6 per game), and his length at the top of SU’s 2-3 zone has been invaluable as he ranks among the national leaders with 2.7 steals per game.

“When you have a guy of the Mike Gbinije-caliber, it helps everybody,” Hopkins said. “He’s doing a lot for us, from assisting to rebounding. He’s going to play those minutes and he’s not coming out of the game. He’s too valuable; he’s in great shape. He’s playing as good as anybody in our league or in the country.”

What Will Be the Impact of Boeheim’s Suspension? To be determined. When the season started, Boeheim was suspended by the NCAA for the first nine ACC games for multiple violations committed by the program. But Boeheim appealed the ruling, and while the Infractions Appeal Committee did not reduce the suspension, it did allow Boeheim to start it on Dec. 5, meaning he would miss only the first three ACC games.

The Orange is 4-2 under Hopkins, who will take over for Boeheim when the Hall of Fame coach retires. The Orange lost at Georgetown and St. John’s, and defeated Colgate, Cornell, Montana State and Texas Southern at home. The St. John’s loss was a blow to SU’s NCAA Tournament hopes because the Red Storm lost its next two games to — wait for it — Incarnate Word (by 22 points) and New Jersey Institute of Technology.

Unless Boeheim could have made a few 3-pointers, it’s unlikely that his presence would have made a difference against St. John’s because the Orange shot a paltry 5-for-26 from beyond the arc. Where Hopkins can make a difference is if SU can win two of the next three games by stealing one on the road at Pitt this Wednesday or Miami on Saturday, Jan. 2, and beating Clemson on Tuesday, Jan. 5, at the Dome.

Can They Win Enough Games to Make the NCAA Tournament? Yes, and here’s how. The Orange went from unranked to No. 14 in the country after defeating ranked teams Connecticut and Texas A&M in the Battle for Atlantis. SU promptly dropped out of the rankings the next week after losing to Wisconsin and Georgetown. Since Texas A&M is still ranked and Connecticut is on the fringe of the top 25, let’s call that a wash.

To make up for the loss to St. John’s, the Orange will need to impress the tournament selection committee with an upset win over a ranked ACC team. That, along with a 9-9 conference record and at least one conference tournament win, should get the Orange in.

SU’s conference road schedule is brutal with games at No. 13 Miami, No. 15 Duke, No. 5 Virginia, No. 7 North Carolina and No. 16 Louisville, plus 10-1 Pitt. The Orange’s home schedule includes just one ranked team, North Carolina, plus Pitt and Notre Dame, so it’s important that SU wins the games it’s supposed to win and steals one or two others along the way.

To that end, there are two more questions that need positive answers: 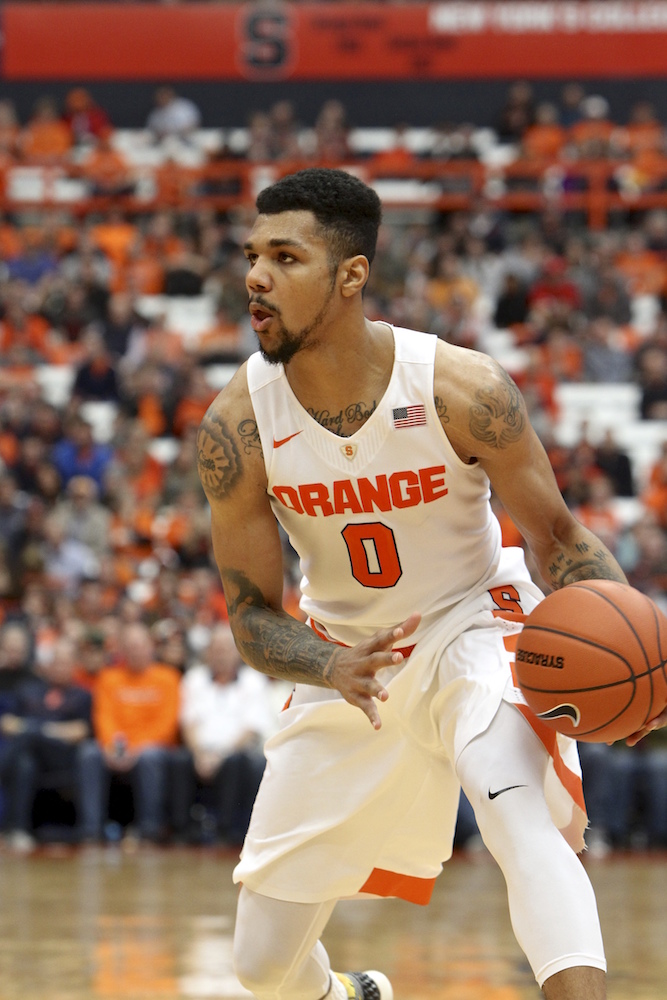 Can the Orange Make Enough 3s? Clearly, SU is living and dying by the 3 this season. In its 10 wins, the Orange is shooting 39 percent (96-for-248) from 3-point range. In its three losses, SU shot 25 percent (19-for-77) from beyond the arc. That’s a difference of about three 3-pointers per game, and the Orange needs those points because it’s not getting enough scoring inside from Coleman and starting power forward Tyler Roberson (8.9 points per game).

Can the Defense Stop the ACC’s Best Offenses? During his five-game stint, Hopkins has talked often about how the Orange can’t get in the habit of “trading baskets,” even if they are hitting their 3s. He stressed the importance of remaining active in the 2-3 zone and making consecutive defensive stops, and how defense is really SU’s best offense as it gets the team in transition for easy baskets.

“The potential of being really good defensively is the thing that excites the coach,” Hopkins said. “As a coach, you get better every day and we’ve had some great halves, but we have to put it all together and play full (games).”

There will be nights when SU shoots the lights out from 3-point range and defense won’t matter as much. But there will be just as many nights when that doesn’t happen, and the Orange’s only chance will be to keep it a low-scoring game.

Fun Fact: Syracuse senior guard Michael Gbinije was named to the Naismith Trophy Men’s College Player of the Year 50-man early watch list, and he’ll surely make the cut when it’s narrowed down to 30 in February.