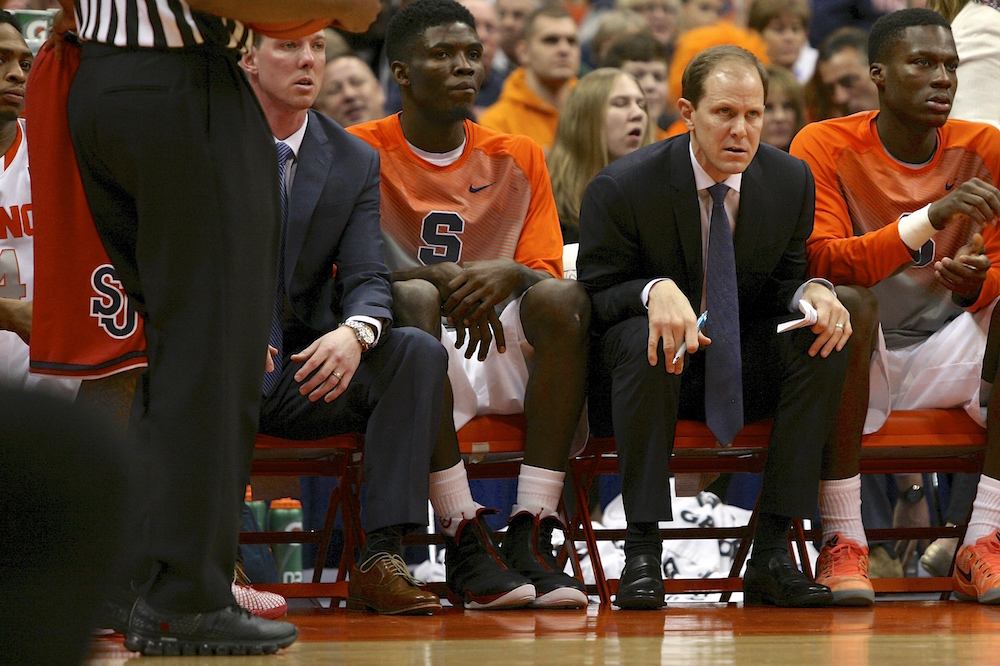 When it comes to his men’s basketball program, Syracuse University coach Jim Boeheim values continuity and loyalty from his coaching staff as much as talent from his players.

As a result, this extraordinary time in the program’s history has been met with an ordinary response from the Orange players.

Boeheim is serving an NCAA-imposed nine-game suspension that was handed down in March after an NCAA investigation found the program had committed multiple violations dating back to 2001. Boeheim appealed the decision and won — kind of.

Initially, the NCAA suspended Boeheim for the first nine Atlantic Coast Conference games. When the NCAA’s Infractions Appeals Committee made its decision on Boeheim’s appeal Dec. 3, it ruled that Boeheim’s suspension should start immediately rather than the outset of ACC play.

So at midnight Dec. 4, Boeheim had to walk away for 32 days just hours before the Orange faced old Big East Conference rival Georgetown in Washington, D.C. Boeheim will now miss only three ACC games: at Pittsburgh and Miami, and at home against Clemson.

While in the long run it’ll be better for Boeheim to miss three instead of six conference games and return for the Jan. 9 game against North Carolina at the Carrier Dome, the suddenness of Boeheim’s departure would have devastated most programs. But that’s where the continuity and loyalty come in as Boeheim, now in his 40th season at SU, was able to turn the program over to his eventual successor, head coach designate Mike Hopkins, who has been an Orange player and coach for all but two of the last 27 seasons.

And the other assistant coaches, Adrian Autry and Gerry McNamara, are also former SU players who have a combined 18 years with the program. So while it’s man-bites-dog news when someone other than Jim Boeheim is coaching the Orange, the players claim it hasn’t been a jarring transition even though SU has lost two of its first three games without Boeheim.

“They’ve been able to keep it steady,” senior guard Michael Gbinije said of the assistant coaches. “Obviously, Coach Boeheim has installed a great system for us and Coach Hopkins kind of just ran with it. He’s not changing anything. He’ll dial up a play or two every now and then, but he’s just following what Coach Boeheim installed.”

It’s not clear how the NCAA is enforcing this, but Boeheim is not allowed to have any contact with his assistants or players during his suspension. He can’t be at practice or any other team activity, and he can’t talk to them on the phone.

Still, the players hear Boeheim’s voice every day in the instruction they’re getting from Hopkins, McNamara and Autry.

“There’s really no difference between what Coach Boeheim is doing and what Coach Hopkins is doing,” said freshman forward Tyler Lydon. “I think all of the guys and the coaching staff, they know what they’re doing at this point. I think we’ve all been handling it pretty well.”

Without Boeheim, the Orange (7-3) lost at Georgetown 79-72, defeated Colgate 78-51 at the Carrier Dome, and lost at St. John’s 84-72 after making just 5-of-26 3-pointers. The Colgate win was Hopkins’ first official victory as these games will be credited to his record, but that’s not what he was thinking about after the game.

“I’m trying to hold the fort down for one of the greatest coaches of all time,” Hopkins said. “Trying to get us better, staying focused on that. I’ll have my day one day, but just getting a win for these guys and getting some offensive confidence, that’s the biggest thing I’m concentrating on right now.”

While Hopkins downplayed his first win, the players did celebrate it.

“It’s a great feeling to get him his first win,” Lydon said. “He’s recruited a lot of us, spent a lot of time with us, so to get him that first win is a big deal for us.”

In recent years, the SU players have often talked about Boeheim being a “father figure” to them. If that’s the case, then Hopkins was the fun uncle who was younger and hipper, and always had their best interests at heart.

Following the Colgate game, Hopkins made a reference to Boeheim as a father he didn’t want to disappoint while he was running the show.

“We need to get a lot better, especially what we’re about to face (in the ACC),” Hopkins said. “And it’s our job to give Coach Boeheim a better team as when he gave it, or … it’s not going to be good.

“You know when the father comes back and he says, ‘What did you do? I gave you the keys to my Bentley and look what you did. You left the Doritos in the back and you didn’t wash it!’ Hopkins said, grinning and pounding the podium where he stood during the post-game news conference.

But the players say Hopkins is also a father figure who can be just as “motivating” as Boeheim, even if they haven’t played that way so far under Hopkins.

“We all look up to both of them, and they both lead like father figures to all of us,” junior center DaJuan Coleman said. “We can’t wait until he comes back, but as he’s gone we’re going to keep playing for Hop and try to get him his wins until Coach Boeheim comes back.”