Kramer dropped by the Rosamond Gifford Zoo last week to see what God’s creatures were saying about Pope Francis’ claim that animals go to heaven.

Pope Francis uncaged a global debate when he hinted that animals go to heaven. Whether he actually meant that sparked a secondary debate, but how curious that no media have consulted those at the center of this theological rumpus: animals themselves.

To correct that, I dropped by the Rosamond Gifford Zoo last week to see what God’s creatures were saying about the pope’s comments. Not surprisingly, a Darwinian diversity of views was on display, ranging from “Tell me something I don’t already know” (Siri the elephant) to “No, seriously, you’re jerking my exoskeleton. I get to go to heaven? Me? I’m freakin’ coral.”

A number of animals refused to join the debate.

“Let’s see if I have this correct,” rumbled Joshua the lion, whose sister, Mindine, died of a uterine infection in October. “Humans are wiping out our habitat. Some of you kill us for sport. You moved me from a zoo in sub-tropical Baton Rouge to Syracuse bleepin’ New York. I live in an enclosure so small I wouldn’t wish it on the naked mole rats. And you are debating whether I get to go to heaven? Bite me.”

Others expressed confusion about what heaven is.

“Would I have to do anything there?” wondered the Hoffman’s two-toed sloth.

“No, dumbass,” snapped Ty, a Therold’s white-lipped deer. “That’s the whole point of heaven. You can do whatever you want. Heaven is perfect.”

“I guess that means you and your ridiculous white lips won’t be there,” riposted the sloth.

The animals generally agreed that Pope Francis is on their side and a clear improvement over Pope Benedict, who asserted that when animals die it just means “the end of existence on Earth.” The mere mention of Benedict caused one of the Patas monkeys to go bananas, but then he calmed down.

“For all we know, Benedict was right,” the monkey postulated. “I mean, what about extinct animals: the dinosaurs? Are they in heaven? You can even take it to greater extremes. The first lungfish waddled onto land 375 million years ago. If those pioneering early vertebrates aren’t in heaven, what chance do spineless jellyfish like NFL Commissioner Roger Goodell have?”

The jellyfish had no comment — nor did Goodell — but the Madagascar hissing cockroach weighed in angrily.

“You vertebrates and your sssssuperiority complex,” She said. “You’ve got a big bone between your neck and your ass. Get over it. Phylumist pigs!”

She had a point. I had come to the zoo thinking about heaven in terms of more advanced mammals: lions, tigers, bears and such. But what about snakes, squid and newts? What about scorpions? Certainly scorpions have major Biblical cred.

Still another doctrinal question hung in the air like the Egyptian fruit bats. Do animals have morals that qualify or disqualify them from eternal afterlife in the company of God? 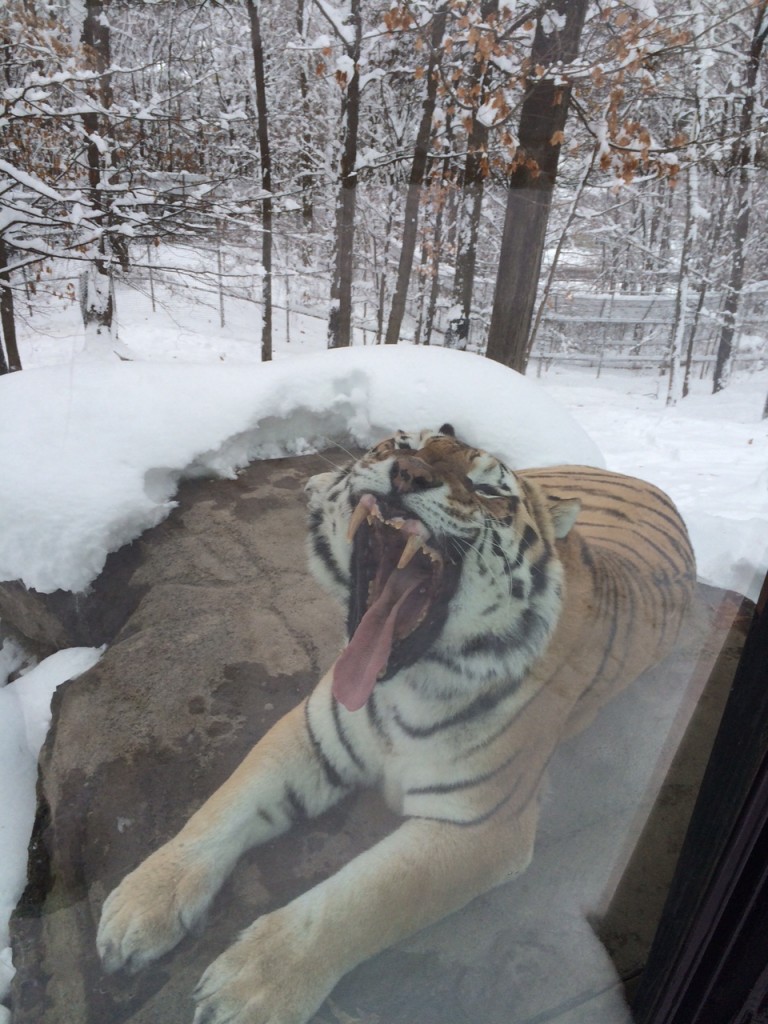 Tatiana the tiger pounced on that one.

“Let me ask you a question, Mister Reporter Person,” she said. “If you remove this see-through barrier, I will kill you. And then I will kill the reindeer — right before Christmas. And then I might saunter down to Coleman’s or Nibsy’s for a Bloody Mary — or Kevin. And you know what?”

“I wouldn’t give it a second thought. Now, you tell me: Do I belong in heaven?”

“First you might need anger management training,” I offered.

“Then it wouldn’t be heaven, would it? At least not for me.”

Tatiana gave a great yawn as I pondered the ecclesiastical conundrum.

“The zoo! We live here in total peace and harmony. No hunger. No danger. No bloodshed. It’s just like John Lennon imagined. And you know what?”

She eyed me with bored disdain.

News and Blues
Michael Vick Must Be So Confused
To Top