“Come hang out” was the mantra for The Stoop when it originally opened in Armory Square back in 1994. The bar, located 24 steps above Trio Italian restaurant and Slices Pizza at 311 W. Fayette St., had a cult following because of its laid-back atmosphere and speakeasy feel, according to owner Eric Alderman.

After more than a decade of business, Alderman shuttered all his Fayette Street businesses, when he couldn’t devote enough time to them while juggling his full-time job as a lawyer. The Stoop would remain closed as Alderman pondered its future. 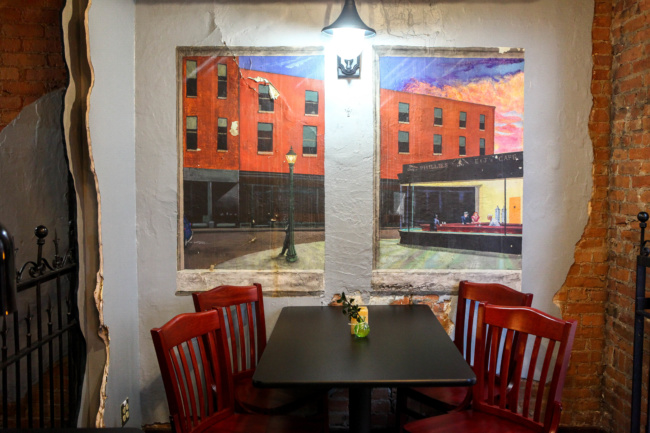 “What I really wanted to do was a place where the bar and the restaurant were equal,” he said.

The Stoop reopened Oct. 5 as the two-floor Stoop Kitchen, in the same space it once inhabited. The nostalgic tequila bar remains upstairs with the same brickwork, the same bathroom art, and the same bar with old newspaper and magazine clippings under glass, while the first floor is a high-dining, locally sourced eatery and bakery.

Alderman, who designed the space himself, said he wanted to keep the same “hangout” feel of the original Stoop. Outlets and USB ports were strategically placed within reach of the tables downstairs, and the dining space has five different seating arrangements to cater to different needs. Clam-shaped goldenrod booths are good for indulging in intimate conversation, while longer tables in the back accommodate larger parties, or customers looking to engage with their neighbors.

The bathrooms are intentionally gender neutral. The accessories, handpicked by Alderman, include a trio of antique theater chandeliers with wrought-iron accents, a community table with seats from a Vermont craftsman, a framed mirror more than four feet wide, and a tiny pigeon statue (a nod to the Stoop Kitchen’s logo) inconspicuously resting in a corner near the booth seating. 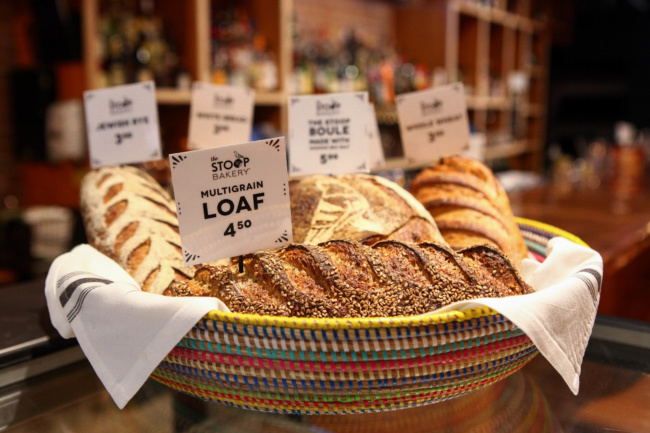 The upstairs bar now has about 168 types of tequila; Alderman said they hope to start live music, like in the old days, on New Year’s Eve. The kitchen space downstairs has a six-week cycling menu based on what farmers have available — it’s currently serving rabbit tacos, pork chops, and hot and sour eggplant — as well as its own wealth of liquors that help create six seasonal cocktail specials.

Alderman allows nonprofits and other groups to use the space free of charge on Mondays and Tuesdays. He said he would like to start hosting Coffee with a Cop, an existing initiative by the Syracuse Police Department to engage with the community in a relaxed setting. A corner in the front acts as a mini-marketplace for local products like olive oils and coffee.

Alderman said he wants the Stoop Kitchen to be a place that does “things for, not just in, the community,” and invited community members to make memories in the reinvigorated space.

Bars at both Stoop venues begin service on Wednesdays to Saturdays at 4 p.m., Sundays at 10 a.m.