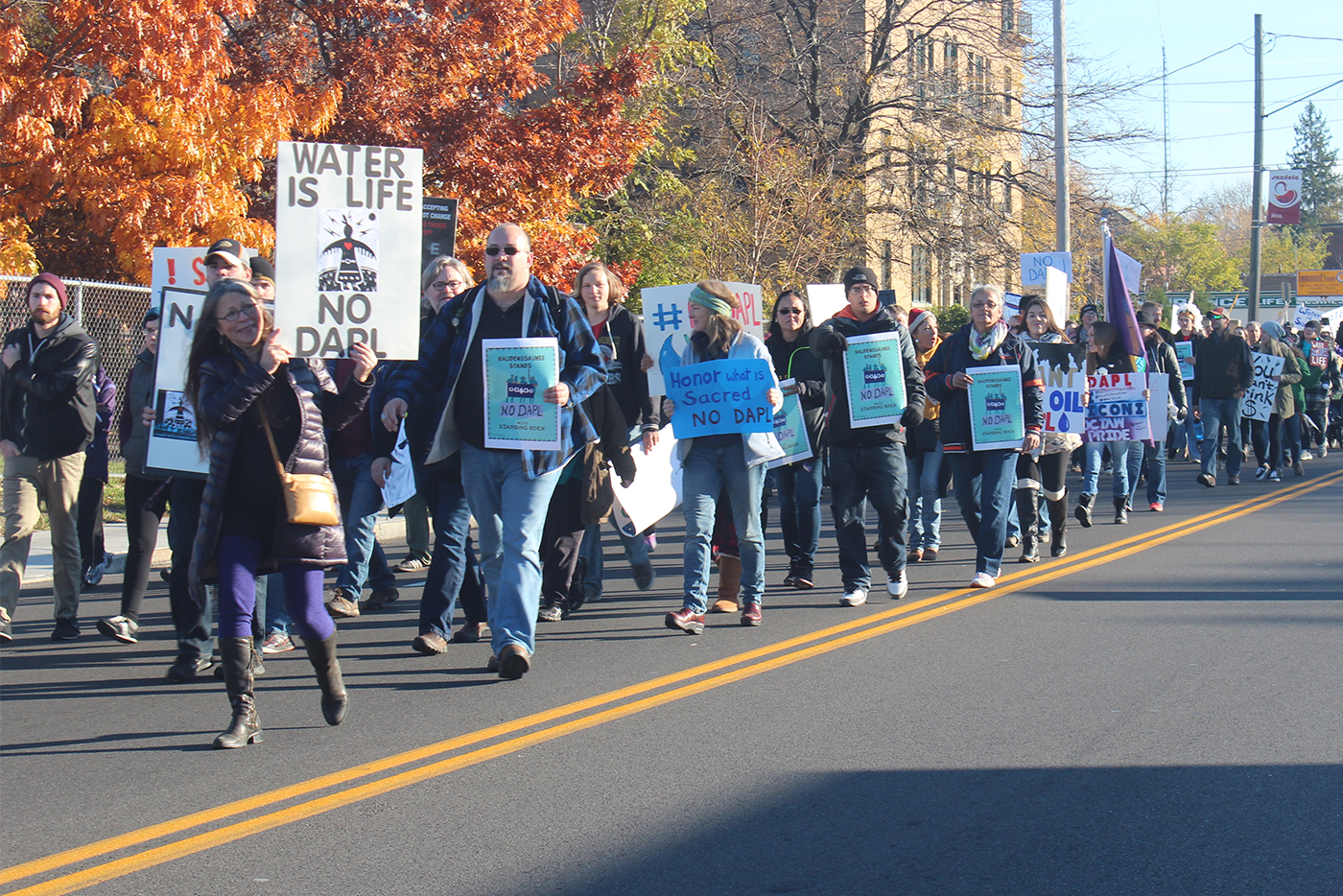 The Onondaga Nation and allies marched in support of Standing Rock

Even before Election Day, the Onondaga Nation was making plans for a local march and rally in support of the Standing Rock pipeline protest in North Dakota. But the Saturday, Nov. 12, event took on added urgency after Donald Trump won the presidential contest.

“This issue is even more important now,” said Jeremy Petrie, one of hundreds at the Clinton Square event. “We elected a president who supports fracking. We should be investing in renewable energy like wind and solar.”

Petrie and his girlfriend, Kathryn Craft, were awaiting the arrival of hundreds of people who had left the Onondaga Nation at noon and marched on South Salina Street. The walkers oppose the $3.8 billion Dakota Access pipeline. Protesters have rallied and camped for months near the project, which is slated to build a 1,200-mile pipeline to carry North Dakota oil to Illinois.

Members of hundreds of indigenous groups and religious organizations have protested the project for months, many calling themselves water protectors, there to safeguard the source of drinking water and burial and cultural sites sacred to the Standing Rock Sioux tribe. On Tuesday, Nov. 15, more rallies were planned in nearly every state.

Petrie and Craft plan to go to Standing Rock and live there indefinitely to oppose the pipeline. Petrie plans to make a documentary about the issue.

“So many Native Americans are standing up for what they believe in,” Craft said. “We want to go there and make a difference.”

The couple will live in a Ford Ranger and stay in a yurt, built by Steve Reed, who will travel to Standing Rock later this month. Reed plans to set up a workshop to teach people to build yurts, folding, lattice structures modeled on Mongolian dwellings. He plans to create a solar-powered media center for Standing Rock.

“Something is calling me there,” Reed said. “A lot of Native American teachings and way of life have informed me and the way I live. Anything I can pay back is good.”

About 2:50 p.m., less than three hours after the six-mile march began, marchers, accompanied by drums and chanting, were audible. First came traffic enforcement vehicles, red lights flashing. Then hundreds of people arrived by foot, on bicycle and in wheelchairs, strollers and wagons.

“Syracuse, N.Y., stands with all our relatives in Standing Rock,” read one sign. Another carried a quote attributed to the late Leon Shenandoah, longtime spiritual leader of the Haudenosaunee (Iroquois) Confederacy: “I work for the Creator. I refuse to take part in its destruction.”

Organizers estimated the crowd, large in comparison to most local rallies, at 1,000 people. The American and Haudenosaunee flags whipped during the windy, chilly afternoon as dozens of people began dancing in a circle.

Sierra George, a Mohawk who lives at Akwesasne and attends Cazenovia College, said relatives and friends have visited Standing Rock. “It’s a classic form of environmental racism,” she said. “The pipeline was originally going through a suburban area, and they didn’t want it. It just shows the injustice.”

On Monday, Nov. 14, the U.N. Permanent Forum on Indigenous Issues said in a statement that the U.S. government appears to be ignoring the treaty rights and human rights of Native Americans opposing the pipeline.

Joe Heath, longtime lawyer for the Onondaga Nation, agrees. “This is just another broken treaty,” he said. Heath was at Standing Rock on Oct. 27, when police in riot gear confronted protesters.

“It was a military attack on peaceful, dignified, prayerful people,” he told the crowd. “It was a war zone. This is just the latest battle on U.S. Indian grounds. When Indians are in the way, we just forcibly remove them.”

Heath plans to return to North Dakota to defend people arrested at Standing Rock. He mentioned the fear many have expressed since the presidential election. “Our jobs as protectors of the Earth and the water just got harder,” he said. “We can’t give in to the forces of hate and racism.”