Rick Springfield is on trial in Syracuse – we’re sharing his music.

Grammy Award winner Rick Springfield was again called to the stand on Tuesday Jan. 13 during a trial of a personal injury lawsuit against him claiming Springfield struck an audience member with his buttocks while performing during a 2004 Chevy Court concert at the State Fair in Syracuse.

According to reports by Sarah Moses at Syracuse.com, the first day of court had its emotional ups and downs with Springfield raising his voice and pointing his finger at the prosecuting attorney. During the 90 minutes of questioning, it was also reported that Springfield shed tears and was given a tissue.

Springfield also testified that women at his concerts do “grab my butt if they’re feeling a little saucy.”

Testimony paused as a video of the concert was played in the courtroom, according to CNYCentral.com

Despite an impassioned day in the courtroom, Springfield enjoyed the sunset over Columbus Circle and shared a photo, along with sentiments about Syracuse’s wintry temperatures, on his Twitter account. 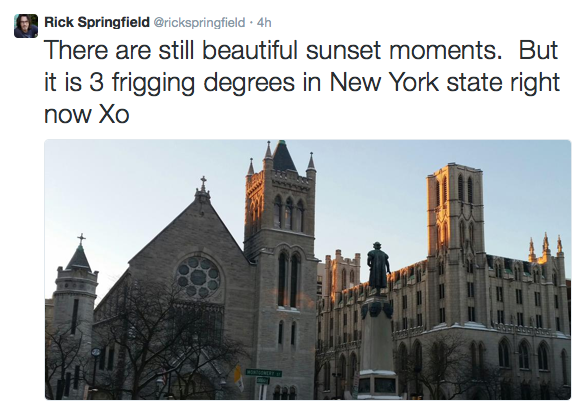 Each day, while the trial is ongoing, SyracuseNewTimes.com will share a Rick Springfield video.

In this installment, we share a song from the 1982 album Success Hasn’t Spoiled Me Yet. The album went platinum, and produced three top 40 singles, including “I Get Excited.”

Read the report on CNYcentral.com – HERE