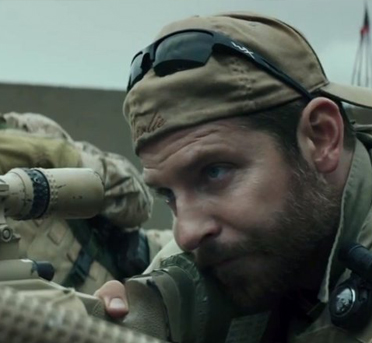 Yes, it’s damn glorious that we’re free to argue about it all

American Sniper has become the movie folks love to love or love to hate.

One thing’s certain as lines wound around malls and box office cash registers cha-chinged to the tune of $107 million-plus on the Martin Luther King Jr. Day Holiday Weekend according to CBS News. The buzz around the Clint Eastwood film about Navy SEAL Chris Kyle has not abated since it was nominated for six Academy Awards.

Filmmaker Michael Moore famously tweeted “My uncle killed by sniper in WW2. We were taught snipers were cowards. Will shoot u in the back. Snipers aren’t heroes. And invaders r worse.”

That, of course, caused a wall of responding tweets, including this one from former Speaker of the House Newt Gingrich: “Michael Moore should spend a few weeks with ISIS and Boko Haram. Then he might appreciate @AmericanSniper. I am proud of our defenders.”

And so it went, with reviewers liking the movie more than not. I appreciated Bradley Cooper and Sienna Miller’s acting in my review here Monday. I thought director Clint Eastwood gave both sides of the issue enough thinking space in a really crowded room. Reel Roy’s Reviews on WordPress, on the other hand, wrote: “At times (chiefly during the interminable scenes set in Iraq), I felt I was watching a WW II-era propaganda film blurred into one of those single-shooter video games where jackbooted soldiers blow away any flesh-and-blood creature identified in big, bold font as ENEMY. Has Eastwood finally regressed to his cowboy roots, with a simplistic white hat/black hat approach to world affairs, totally disregarding our messy connectivity – technologically, economically, socially? Sure feels like it.”

Chris Kyle-portraying Bradley Cooper said in interviews that the movie had nothing to do with politics, meanwhile, while director Eastwood told the Daily Beast it explains the “plight” of the soldier and provided a “character study.”

Wrote reporter Terrence McCoy for the Washington Post Tuesday: “But this was no ordinary soldier. This was the late Chris Kyle, the much-mythologized ‘deadliest sniper’ in American history. And regardless of what Cooper wants, his movie has become political. Before he was shot to death at a Texas gun range, Kyle, who claimed he killed at least 150 people while working as a sniper in Iraq, oozed conviction and charisma. He wore big boots. He spoke with a languid Texas drawl. He wrote a best-selling memoir. He made millions. And he stirred controversy just about everywhere he went. …

“The film was subject to widespread praise among conservatives for depicting an American soldier at his best and condemnation among some liberals who question the admitted pleasure Kyle took in killing and dehumanizing Iraqis. And then there were the tales Kyle told about himself, which came under increasing suspicion after numerous journalists tried — and failed — to corroborate them. Among them: Kyle once said he shot dead two armed Texas thugs who wanted to steal his truck. He said he traveled down to New Orleans and killed 30 bad guys in the chaos following Hurricane Katrina. And he also falsely claimed he punched out former Minnesota governor Jesse ‘the Body’ Ventura after Ventura, a former member of a U.S. Navy Underwater Demolition Team, disparaged the Navy SEALs.”

Conservatives and liberals. Military and civilian. Hollywood and Washington. Everybody’s talking. And if you think that’s bad in any way, shape or form, keep reading.

In Russia, meanwhile, the thumb is heavier

As the American Sniper box-office take rolled to triple-digit millions in its first weekend of wide release and the shouting and conflicting stances were bandied about in bigger print and louder bites in the media around the country tangling with the issues of patriotism and heroes and war and the veracity of characters on both sides of the guns, this little story got slipped into Variety by reporter Leo Barraclough from London on Wednesday: “Russian Politician Seeks Control of Release Schedule.”

What the story goes on to report is that “Russian culture minister, Vladimir Medinsky, is looking to take control of the theatrical release of movies in a bid to protect local films. Medinsky said Wednesday the measure would ensure that Russian film were able to recoup their budgets, according to press reports. Where there was a clash of release dates for local films and Hollywood movies, the latter would be forced to make way.
Medinsky said that distributors should negotiate between themselves to make sure that the release of foreign pics did not conflict with the release of a local film.”

Barraclough goes on to say that last year, Russian films accounted for 17 percent of the country’s box office gross. And money does make the world go round. So …

But, wait. At the end of his story comes: “Medinsky said he would not fight for all Russian films, however. ‘We will set financial, political or ideological priorities,’ he said. One local film he is unlikely to defend is Oscar nominee and Golden Globe winner ‘Leviathan,’ even though the culture ministry helped fund the film. Medinsky alleged last week that Andrei Zvyagintsev’s film had exploited anti-Russian sentiment abroad by portraying the country in a negative light. The film is to be released in Russia on Feb. 5.”

Imagine the hue and cry around these parts about something like that. Yay us.