Outwardly they appear to have little in common. Candide runs at a frenzied pace with more in-jokes, allusions and satirical digs than a body can follow, even with a notebook in hand. Cato in Utica by Vivaldi (yes, Four Seasons Vivaldi) is an opera seria, with all the passion in the music and hardly any action at all, if you overlook suicide.

Upon examination, however, they share a troubled textual history. The original first act of Cato has been lost and a substitute was painstakingly constructed, like a ship in a bottle, by Alessandro Ciccolini and Alan Curtis.

The original book for Candide by the famously abrasive Lillian Hellman was long ago judged unwieldy, and the show has undergone more than a half-dozen rewrites. This text comes from John Caird at London’s Royal National Theatre (1999). It throws out some numbers, restores characters from Voltaire’s original novella, and changes words of songs and the ethnicity of characters. But it unites a meandering story and fuses the conflicting themes of comedy, cruelty, outrage and hope into a tight, compelling cord.

There are two ways of parsing the “legend” of Candide’s disappointing initial run. Certainly, it is a legend because that story distorts facts. Bernstein’s music was immediately embraced. The Rossini-like “Overture” quickly became his most-often performed orchestral work and remains so 58 years later. The coruscating coloratura solo, “Glitter and Be Gay,” one of the greatest vocal challenges ever written (two E flats above high C), has had a life of its own as a showpiece. As Cunegonde, Kathryn Lewek knocks the daylights out of “Glitter,” but it cannot stop a show where you’re so regularly dazzled. 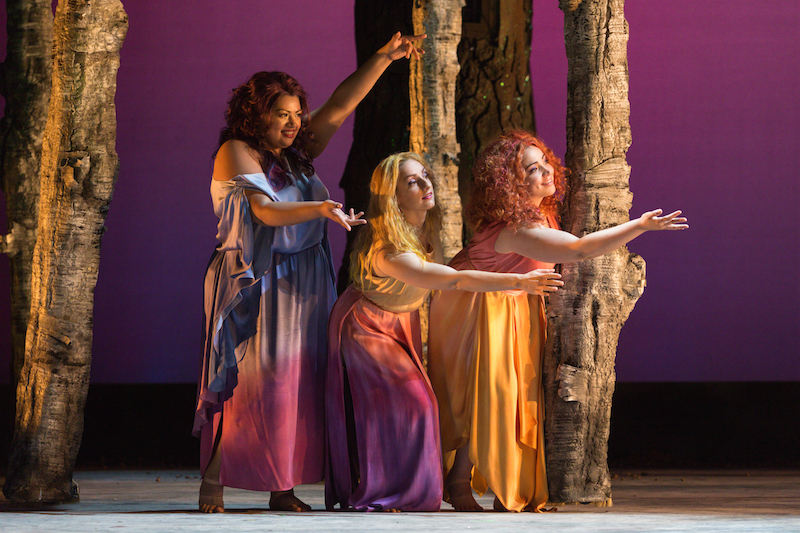 Candide’s picaresque story line combines two principal themes. One is the improbable but enduring love between the title character Candide (tenor Andrew Stenson), the bastard child of a German baronial household, and the nobly-born Cunegonde. Not only does their love flout convention, but they are clearly not made for each other. In their heavily ironic love-duet “Oh, Happy We,” he pines for quiet and simplicity while she craves jewelry and fancy dress balls.

The other is the relentless thrashing of a caricature of the philosophy of optimism, “This is the best of all possible worlds,” as voiced by the glib, self-assured and lecherous Dr. Pangloss (baritone David Garrison, who also performed on TV’s Married… With Children). Intellectually, we soon perceive, Candide has little to do with obscure philosophical wrangling and much more to do with 1950s America. Dr. Pangloss lines up well with smiling demagogues like Dr. Norman Vincent Peale, just as the Spanish Inquisition, which will burn you at the stake for doubting the dogma of Original Sin, clearly evokes the red scare tactics of Sen. Joseph McCarthy.

Director Francesca Zambello and scenic designer James Noone deftly streamline the episodic plot (one day in Lisbon for the earthquake, another day on a slave ship at sea) by bracketing the action on a backstage set, on which each successive scene follows upon another like a new act in a vaudeville program. Only classier and sometimes eye-popping, like the streets of gold in El Dorado, or a celestial Ziegfeld show.

All this physical razzle-dazzle, including bare-thighed chorines as Bavarian soldiers, serves only to enhance Bernstein’s musical cornucopia, emphatically conducted by Joseph Colanari. His invention was running at full throttle at age 38, so that three leftover numbers were recycled in West Side Story the next year. Bernstein parodies at different moments Johann Sebastian Bach, Sergei Prokofiev, Cole Porter, Richard Wagner and Tin Pan Alley. “Bon Voyage” comes with a seven-beat line. Better than being just clever, his output is touching, amusing, thrilling and moving. The closing number, “Make Our Garden Grow,” a secular hymn, visibly brought tears to scores of eyes in the audience.

Wonderful as Stenson and Lewek are, more than a half-dozen minor characters pop up to deliver compelling solos, notably mezzo Marietta Simpson as a Caribbean-accented Old Lady in “I’m Easily Assimilated,” bass-baritone Matthew Scollin as the tall, street-sweeper Martin (a character absent in other stage versions), and mezzo Cynthia Cook as the Baroness and later as the slave trader.

Almost two decades ago Clive Barnes first uttered the heresy that Candide is greater than West Side Story as the most fully realized expression of the maestro’s musical genius. As produced at Glimmerglass, it is also a pinnacle in American musical theater.

Although Antonio Vivaldi, the red-haired priest, may be the best-known baroque composer, few knew that he wrote more than 100 works for the stage, almost none produced these days. Cato in Utica came late in his career, with a libretto by the then-popular Metastasio, who had intended it for someone else.

We begin with two historical figures who retained much resonance in the minds of educated people in Vivaldi’s day, Cato and Julius Caesar. They are enmeshed in a melodramatic story with invented characters. Cato, the upright last Roman Republican, represents uncompromising virtue while this Caesar, embodying brute force destroying the Republic, is a nominal villain. Once these characters get into motion, the bad guy gets the better lines.

Utica, the seaport for Carthage, signifies exile. Cato (tenor Thomas Michael Allen) has taken with him his red-haired daughter Marzia (mezzo Megan Samarin) whom he’d like to marry to blond Arbace (countertenor Eric Jurenas). Instead, Marzia falls into taboo love for her father’s enemy, the massive and brooding Caesar (countertenor John Holiday). Caesar’s emissary Fulvio (mezzo Allegra De Vita in a trousers role) might be devoted to his boss but longs for Pompey’s widow Emilia (mezzo Sarah Mesko), who is consumed with hatred for Caesar.

For some opera lovers, The Magic Flute (1791) is a work they’ve known ever since they were children. The story has a fairy-tale quality that can appeal to a child: A prince goes on a quest to rescue a beautiful princess who is being held captive by a ruler believed to be evil. There is a wicked queen, a kind and loving father, and yes, a magic flute that will get the young couple through any difficulty. All that, sung to some of Mozart’s most charming — as well as some of his most profound — music. 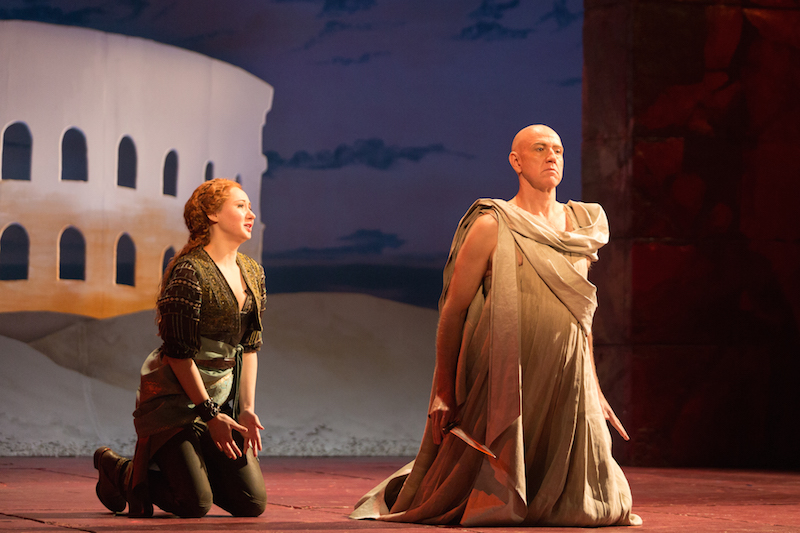 The advance publicity made clear that director Madeline Sayet would reinterpret the opera in keeping with her own Mohegan traditions. (Cooperstown’s own James Fenimore Cooper, it turns out, got it wrong: Mohegans are still alive and well.) Would Sayet twist the beloved opera out of shape?

Not to worry, Sayet’s interpretation works perfectly. Before the opera proper begins, she provides a bit of backstory. The handsome young business-suit clad Tamino (Sean Panikkar), briefcase and smartphone in hand, is rushing about with throngs of other preoccupied people. Once the curtain parts on scenic designer Troy Hourie‘s lovely woodland, alive with woodsprites dancing from tree to tree, Tamino wonderingly asks, “Where am I?” We understand that he has set out on a quest for self-discovery.

A major plus in the Glimmerglass production is the new translation of Emanuel Schikaneder’s libretto into highly singable, current, and often very funny English by Kelley Rourke. The Magic Flute is a sing-spiel with as much spoken dialogue as singing. She has made the story more accessible by changing Tamino’s lusty companion, Papageno (Ben Edquist) from a bird-catcher into a hunter. The villainous Monostatos (Nicholas Nestorak), a scary black man in Schikaneder’s original, is now just a nasty guy.

One of the pleasures of this multi-ethnic production is the way it breaks down stereotypes. The wise, all-knowing Sarastro is sung by Soloman Howard, an African-American with a rich, deep bass voice and a commanding presence. The princess Pamina is Jacqueline Echols, a lovely African-American with a voice to match her appearance. The vocal sensation of this production is So Young Park, who executes her difficult coloratura arias as Queen of the Night with thrilling mastery. Breaking the mold of male maestros is conductor Carolyn Kuan. Brava!

Merry-Go-Round Boogies Down
News and Blues
To Top