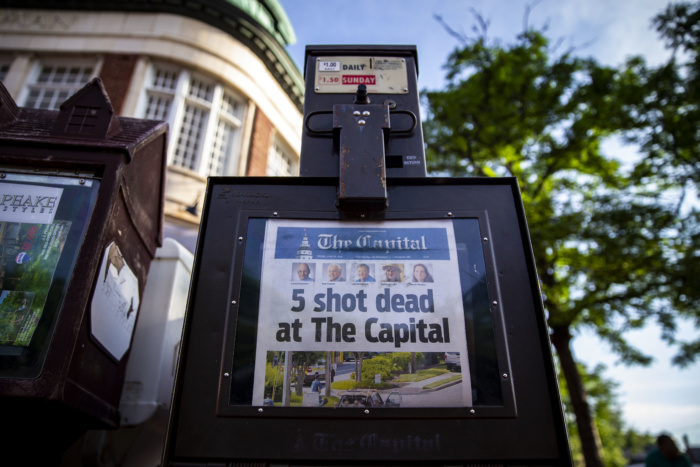 The enemy of the people.

Those are just some of the barbaric words that some everyday people and politicians love to use to refer to the media these days.

Hardly anyone who has spent time recently working in a newsroom ― no matter big or small ― has been spared. In the last three years, I myself have been called “bias as hell,” “an uninformed trash writer,” “a sycophant for Gov. Andrew Cuomo” and my personal favorite, “a direct threat to democracy,” which I was called by a communications manager for a member of Congress.

I submit that the mainstream national media is far from perfect. I have written extensively about their errors, their shortcomings and storytelling structures that give some people a reason to doubt their trustworthiness.

But I don’t work for CNN, The New York Times, Reuters or anything like that.

Neither did Wendi Winters, Gerald Fischman, Rob Hiaasen, John McNamara or Rebecca Smith. They worked at The Capital Gazette in Annapolis, Maryland ― until they were murdered in cold blood last week during a mass shooting inside their own newsroom committed by Jarrod Warren Ramos.

The newspaper is not part of the national press that is often the target of criticism when we talk about “the media.” It was a local community newspaper, the very bedrock of good journalism in this country. It was responsible for not covering what happens in the White House, but what happens in the Anne Arundel County Court house. It reports on school board election results, how a county auditor was nominated for the position of Annapolis finance director, that a church recently welcomed a new pastor and how local students helped the homeless.

That is not fake news.

The daily publication, along with its sister publications, has been reporting the news of western Maryland since the early 1700s, making it one of the oldest established newspapers in the nation.

And even after their office had turned into a crime scene and their staff members’ lives had been tragically cut short, the surviving employees of The Capital Gazette insisted on completing their job and getting the next day’s edition out on time to their readers. And they did, fulfilling the journalistic duty that news doesn’t take weekends or holidays off, and doesn’t stop even when it’s an incident at your newspaper that becomes the news.

That doesn’t sound like the enemy of the people to me.

But local newspapers are only the bedrock of journalism because of those who devote their lives and careers to it. In such a trying time for the news industry, employees are facing more work and longer hours for salaries that won’t ever make them rich. They put their reputations on the line every day, making sure their information they report is completely factual, while knowing that the times could put their jobs on the line as well. It’s the passion and commitment to a community, along with the natural human hunger for information, that makes the job fulfilling. And all the while, they face attacks ― both verbal and violent.

Who are those employees?

Gerald Fischman was “the conscience and voice” of The Capital Gazette, according to a profile on him, and his editor and publisher said he possessed an ability that “deserved a higher calling than The Capital.”

“When we had something that needed to be covered on the weekends, when we only had a few people to call on, you could always call on Wendi,” the paper’s editor said in an article on its website. “She would good-naturedly crank out three or four stories in a weekend.”

John McNamara was a versatile sports reporter who worked at the paper for nearly a quarter of a century.

Rebecca Smith was a sales assistant at the organization who proved to be a crucial part of a newspaper’s most important departments.

Do they sound like they are the enemy of the people?